The days of even the lowest-cost options creating visibly-objectionable color problems are largely over, and while there's often a lack of deep blue and the very worst can occasionally be deficient in red to the point of making the talent look slightly blotchy, that's usually quite visible in tests. The problem for digital imaging technicians and directors of photography, then, is not usually making individual lights look good.

The problem is making two different models of light look the same.

To be fair, this is not a new problem, or one solely affecting LEDs. The idea of a quality white light is that it emits light of every color, so that no matter what color of object we put in front of it, there will be some light for that color to reflect. Split such a light into a rainbow and we see a continuous sweep of changing hue. LEDs, HMI and fluorescent would produce a rainbow with at least some darker bands in it, colors that the light source doesn't emit, or at least emits less. Usually, we get away with this because most objects don't reflect very saturated colors, so that no matter what's coming out of the light, the object will reflect something. 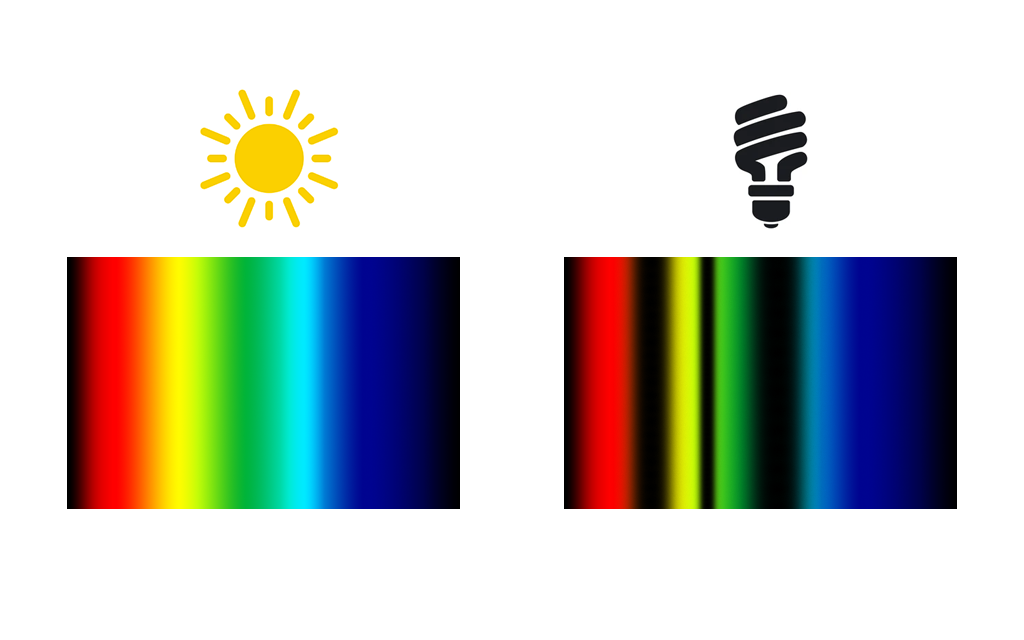 Different source of light that looks white may each have a very different spectrum. 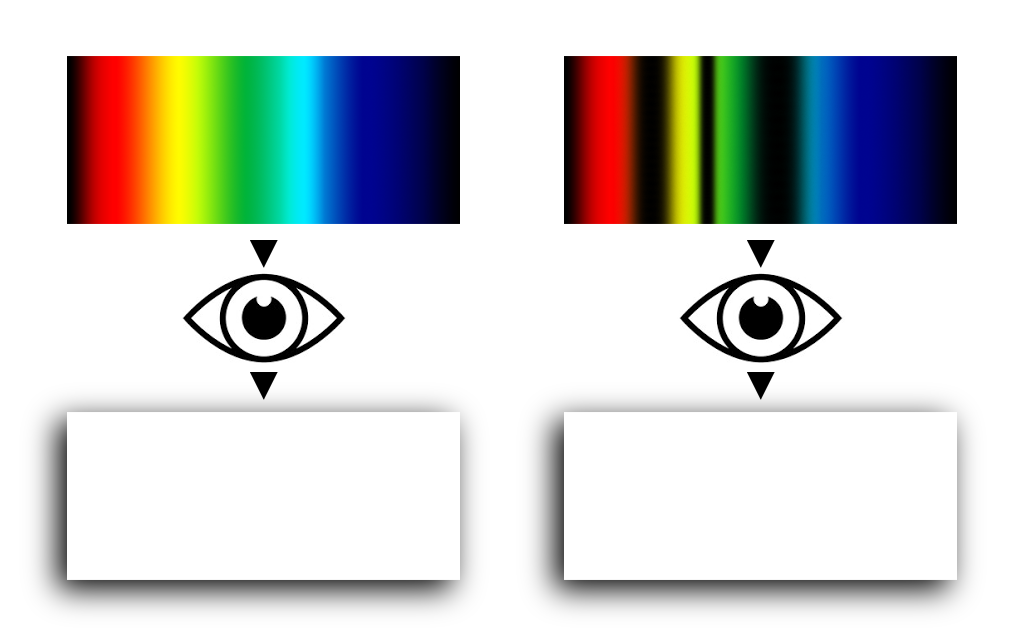 The eye may see lights with different spectrum as the same.

Cameras, though, tend to use fairly saturated primary colors. That means they're potentially more likely to see differences between two lights which may not have the same spectrum, visualizing, say, a missing shade of blue as a slight yellow tint. No two cameras are the same, so two lights that match to one camera may not match on another. Add the complication of objects of various bits of production design in colors which may or may not reflect the colors which are in a light, and the situation becomes, well, complicated.

Metamerism Mixing
The phenomenon of two lights each having a different spectrum looking the same is called metamerism, and any primary-color mixing system, including LED lights, is reliant on it. There are many different ways to build an LED light which lead to each of them having a different spectrum, even when they're trying to produce the same color. To the eye, they tend to work fairly well; any white light of reasonable color quality and a given color temperature should look identical to any other. 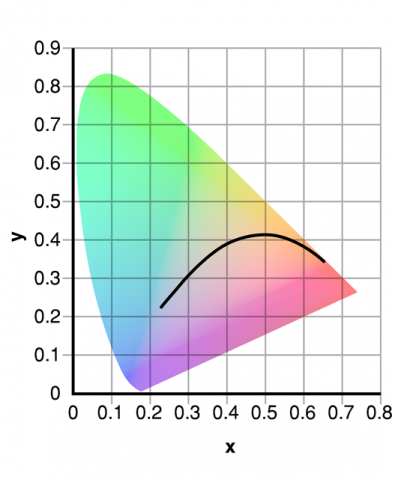 Light produced by things that glow solely because they're hot will always be on this curve.

Sometimes, though, they don't.

The problem - at least for white light - is that the color temperature indicated on most LED lights is more completely called a correlated color temperature. Conventional color temperatures describe the light emitted by something solely because it's glowing hot, a situation closely approximated by an incandescent lightbulb. It's instinctive to most people that hot metal glows first red, then yellow, then white, as temperature rises. There is no mechanism for something to glow, say, green-hot because it would somehow have to be hot enough to emit green light without also being hot enough to emit red, yellow and orange light.

Color Temperature Interpretation
LEDs don't emit light because they're glowing hot. As such, they don't formally have a color temperature; they have a correlated color temperature, a reference to the ideal color temperature that the LED most closely approximates; that's why LED lights often describe their color temperature setting as "CCT". LEDs are absolutely capable of being too green or too magenta, having gaps in their spectrum, but still looking reasonably white. They're a metamer of white; possibly a very close one, but when using two cameras to see one light differently it is hard to say which of those three pieces of equipment is really at fault. 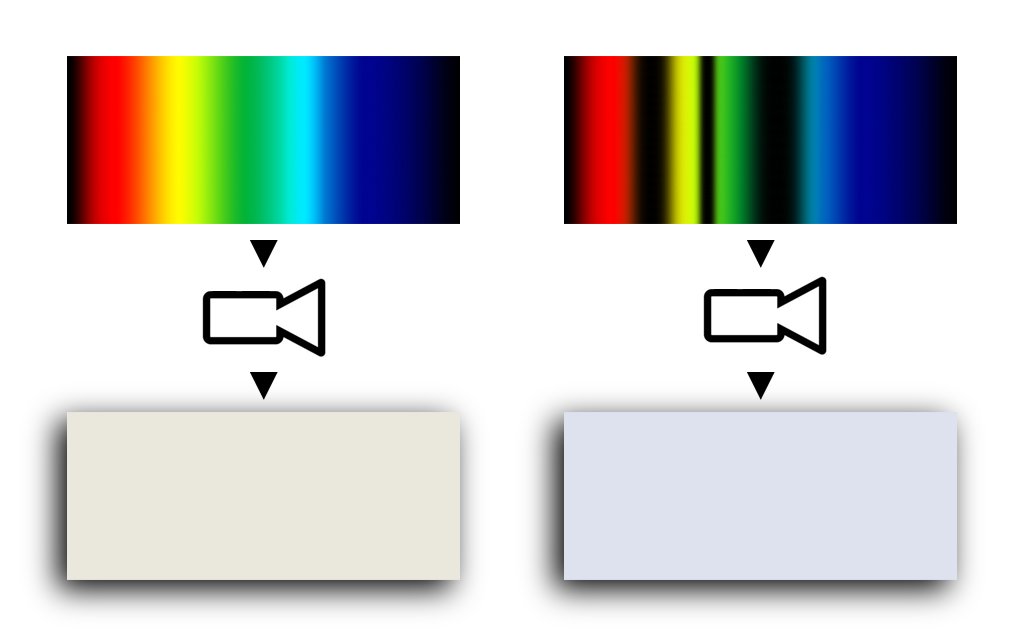 Cameras may be less forgiving than the eye, and view apparently-white light as something other than white.

What most people really want and need is to predict when that is likely to happen, based on knowledge of the camera and lighting systems involved. As we've seen, though, that can involve a vast range of variables, and it's not something we can determine intuitively or detect by eye.

That's where assessment systems such as CRI, TLCI and SSI come in. CRI and TLCI work in vaguely similar ways, by illuminating test color patches and comparing their appearance to a standard. Both standards are intended to work only with lights which are approximately white and try to express how likely they are to cause colors to look wrong as a score out of 100. CRI uses rather unsaturated color test patches and is not very sensitive, so can be misleading and is best avoided for film and TV applications. 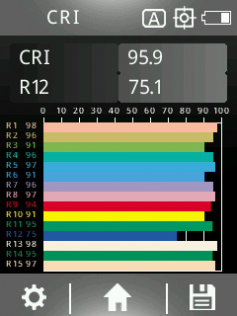 Standard CRI tests only use the top eight of these colors, resulting in a less-accurate test. Even more modern revisions have only improved it slightly.

Matching Color
TLCI, the Television Lighting Consistency Index, uses a much better set of color patches (those on the familiar Macbeth chart) and is much more useful. It was designed to work best with the standard color response of a television camera engineered to satisfy the ITU's Recommendation BT.709, though it is difficult - not impossible, but difficult - for a light to have a high TLCI and still cause serious color rendering problems on most cameras. The real issue with assessment systems which give a simple score is that there are an infinite number of possible lights, each of which might have a different spectrum, and TLCI has no way to express how they differ. One might lack red; another blue, and they might both have the same TLCI.

For situations where we want to specifically check whether two lights are likely to match, SSI is the Spectral Similarity Index, which compares two lights for consistency. If one of the lights we're comparing is a known, high-quality white, then we might view the SSI as a general-purpose figure of merit as well as a match to a particular type of white. Uniquely, though, SSI can also be used to compare known poor-quality lights, or deliberately tinted or colored lights used for special effects.

Do The Tests
Probably the most straightforward approach, though, is simply to try it, auditioning lights on camera. Where a single camera is used, two lights can be independently used to illuminate test cards and adjusted for the desired result. Some compromise might be involved; trim the lights to match on a grey card, and they might not match on any given color. A chart with colored chips is appropriate. 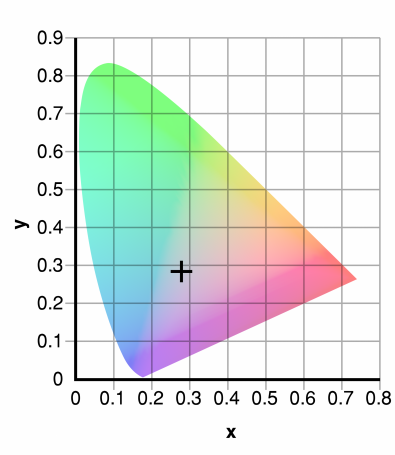 Every visible color can be selected on a CIE 1931 xy diagram, though each point on the chart is not associated with a single spectrum; many metamers can exist of each color.

This is one of those rare times when accurate on-set monitoring is really genuinely useful - not because human eyes are particularly repeatable, because they're not, but when side-by-side evaluation of two different pieces of technology is key. It's also situations like this when the configuration of cameras and displays can become incredibly critical. Lookup tables, whether used to normalize a low-contrast recording format or to calibrate a monitor, have a huge influence.

The good news is that lights with both color temperature and adjustable green-magenta bias should be adjustable to look similar on subjects of a wide variety of colors. CCT and green-magenta adjustments can solve at least some of the problems we've been discussing here. That, or CIE xy coordinates, a full explanation of which is outside the scope of this article but which theoretically allows any visible color to be selected with a pair of coordinates on the familiar horseshoe-shaped CIE 1931 chromaticity diagram. The ability to slide those coordinates around is a convenient way of fine-adjusting colors.

Just Acceptable
Perhaps the best long-term solution to this is LED lights that more closely approximate something that glows solely because it's hot. Because of the very different operating principles behind LEDs as compared to incandescent lightbulbs, it's likely that, for a while at least, we'll remain dependent on lights that are a source of usually, mostly, generally acceptable white light.

All of this is to say nothing of the paucity of standardization in colored light. At the moment, for instance, zero degrees of hue angle tends to be some sort of red, although there's no formal description of what shade of red it's supposed to be, what full saturation means, or what kind of white we get if we select zero saturation. Punching the same numbers into the hue and saturation controls of two different lights is likely to create wildly mismatched results and beyond SSI, the only solution is to match on a monitor. It is possible to standardize these things on sufficiently well-made new lights; whether it'll ever be possible to keep LEDs accurate as they age, however, is another matter entirely.