As Pro AV productions get more complex, the industry has longed for a set of common, ubiquitous, standards-based protocols for interoperability on a managed video-over-IP network. In 2017, as the first set of SMPTE ST 2110 standards were published, AV professionals saw the framework of their dream become reality.

A year later the Alliance for IP Media Solutions (AIMS) began work on a standard way of using 2110 but adding things specific to the AV industry. They called this new proposal the Internet Protocol Media Experience (IPMX), which builds on foundational work from SMPTE, AWMA, and VSF.

In fact, much of the ST 2110 spec forms the core of IPMX, such as the way devices are registered and managed on a network. This helps with asset discovery (NMOS), the way assets shake hands, encryption and ways to respect registration of devices on a network. IPMX is also a proposed set of open standards and specifications to enable the carriage of compressed and uncompressed video, audio and data over IP networks for the pro AV market.

An Open ST 2110 Approach
IPMX takes an open-standards approach to ensure that accessibility, ease of use, and implementation are available to all. The authors of its components come from organizations that represent the best interests of Pro AV and IT infrastructure stakeholders as a whole, rather than the interests of individual manufacturers. This is in contrast to other solutions that, while calling themselves standards, are owned by a single entity that controls their intellectual property and usage, whether it is in the form of hardware, software, or a combination of the two.

“The authors of its components come from organizations that represent the best interests of Pro AV and IT infrastructure stakeholders as a whole, including end users, service providers, software developers, and manufacturers,” he said.

“Building on the success of SMPTE ST 2110 in delivering the utmost in performance media over IP, contributors to the IPMX standard also wish to make it easier for actors in the market to secure their assets across product types and brands; to build or buy their solutions using an open standard; to open up new avenues for software-defined workflows and accelerate the value-added software market in Pro AV; and to eliminate some cost, complexity, and loss of performance when mixing hardware and software end points with sub-frame latency media.” 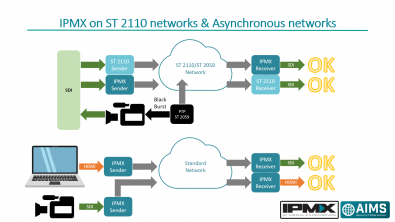 The emerging standard works in both compressed and uncompressed modes.

Make IPMX Your Own
Several non-broadcast industries have endeavored to use part of 2110, like, for example, the medical community. They were interested in how IP networking could help overcome the challenges of managing real-time transfer of video, and/or audio, and associated medical metadata inside the operating room. So, they took the 2110 standard and grafted on a DICOM extension called DICOM Real-Time Video (DICOM-RTV). A DICOM file is an image saved in the Digital Imaging and Communications in Medicine (DICOM) format. Recine said DICOM-RTV turns certain optional elements of 2110 into mandatory features and adds things that were missing for medical profiles.

A Gigabit Experience With Sub-Frame Latency
IPMX maintains all of the SMPTE-ratified video formats, including uncompressed video and JPEG-XS, but it also adds a (soon to be published) ProAv codec that drives exceptional quality/performance with PC desktop content, which is 4:4:4 RGB data, as well as camera and video content.. And the standards bodies, advocacy groups, and technical recommendations teams building IPMX are trying to pack all of that into a one gigabit experience with sub-frame latency.

The other main benefit of IPMX is that it provides a bridge between the SDI world and the HDMI/HDBaseT world without the need for costly conversion equipment. It is technically possible for gateway products to synchronize fully to a PTP regulated ST 2110 network and to pass the video and audio essence natively to a second IPMX network with more relaxed and Pro AV friendly features without bringing everything back to baseband and re-encoding it. If you have a stadium that has an SDI-based production control room, all signals coming from there can be more easily sent to display images on the Large score board as well as on the hundreds of screens throughout the building. This has the potential to save costs, increase performance, simplify installations, and reduce points of failure.

Being rooted in ST 2110, IPMX products can be properly regulated by PTP ST 2110 networks. But IPMX also sustains performance on simplified asynchronous networks which are more popular in Pro AV infrastructures.

Baseband I/O is easily converted to/from IPMX including SDI, HMDI, and HDBaseT. Cyber-security is also top-of-mind in the spec by focusing on NMOS device registration and robust AES encryption of the both the communication+control layer and the audio/video/keystroke/etc. payload layer.

“IPMX offers all of the performance of ST 2110 but without requiring the expertise and specialized equipment required to leverage a grand master clock and precision timing protocol on the network,” said Recine. “So you want the experience of quality and latency that allows a live singer on stage to be displayed on a large screen behind them and be perfectly in sync… 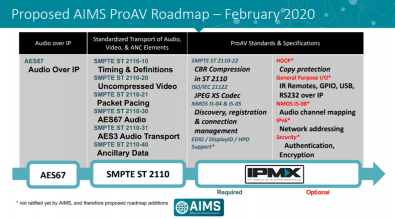 The AIMS roadmap hopes to lead to full standardization by the end of 2022.

“…IPMX attacks that exact problem. It basically provides the performance of a baseband network but with the flexibility and scale of an AV-over-IP network.”

“There’s good support for SMPTE from the HDBaseT Alliance, which claims over 40 million products shipped in the market,” said Recine, adding that potential users like the fact that IPMX is open so people can use purpose built hardware products or build software nodes requiring PC-based effects. “HDBaseT is the market’s established short-throw performance media networking solution and handles the last 100 meters really well, in conference rooms and boards rooms. IPMX is a natural partner to those eco-systems to help existing and future adopters of HDBaseT products to wire large buildings and entire campuses. That requires a main backbone to be on AV over IP. Members of the HDBaseT Alliance are clearly interested in a security-focused standards-based approach to bridging HDBaseT to AV-over-IP for longer distances and high node counts.”

Future Ready/Ready Soon
IPMX is also ready for 8K (or higher) resolutions, as well as for 10, 25, 40, and 100 GbE networks. Additional capabilities include HDMI support, digital copy protection with HDCP, network discovery and registration, I/O management, enhanced audio channel mapping, and compressed media using JPEG XS. the complete set of standards is open and free to download and use. Many parts of this are already published as portions of the SMPTE ST 2110 standards. And more definitions are still being added. For more information, visit the IPMX website.

The good news is that after almost four years IPMX is now gearing for production and shipment. There will be several public interoperability events in 2022 to show different IPMX-compatible products working together on a ProAV (IPMX) network. InfoComm 2022, June 4-10, should be one of the first.

AIMS is hoping that standards suitable to create developer and user products will be ratified by standards bodies by the middle of 2022. Built on the collaborative effort of hundreds of leading companies, IPMX is designed to be the technology that manufacturers, integrators, and end-users need to achieve truly engaging IP media experiences.