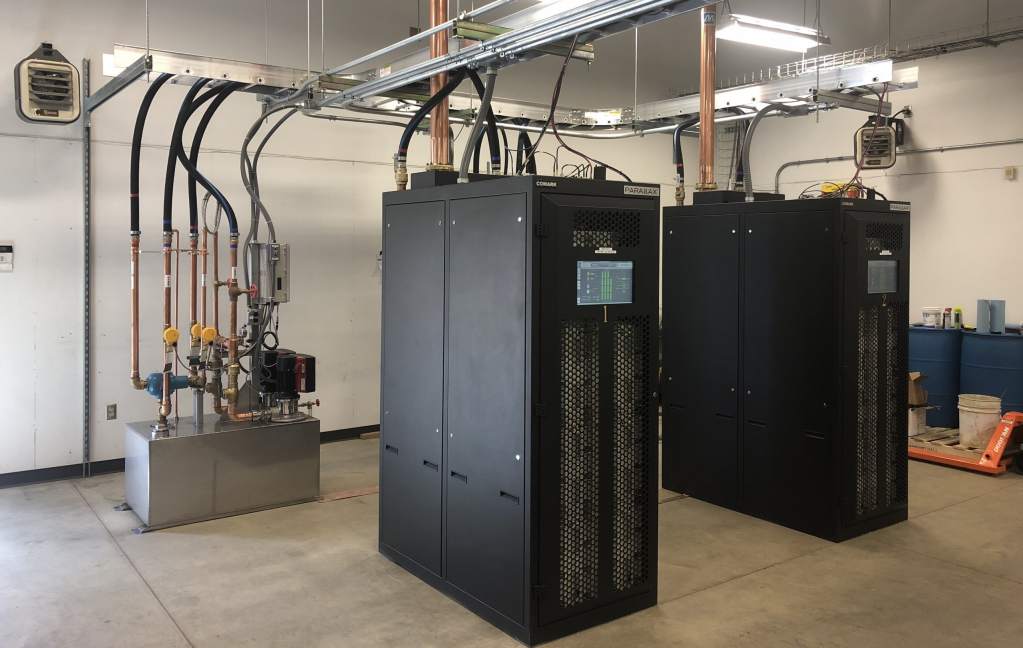 Now that the repacking of TV stations into a condensed spectrum is complete, many stations, especially those that are making the move to ATSC 3.0 broadcasting, are turning their attention to the non-repack transmitter and its related parts—antenna, tower, generators, etc.

Indeed, after 39 months, the FCC has announced that the post-incentive auction transition, which saw many TV stations take part in the repack from their pre-auction channels, has been successfully completed. During the repack, 987 full-power and Class A TV stations were reassigned to new TV channels.

For many, it’s time to upgrade all of their aging hardware still left operational in the field.

Staying In Band 1 Can Save On Cost

When the repack happened, there were basically two scenarios that occurred when stations sold their channel; they either went off the air and entered into a channel share partnership with another station in their market, or they moved to either VHF low band (Band I) between 54 and 88 MHz or VHF high band (Band III) between 174 and 216 MHz of the newly allotted spectrum. As it turned out 13 stations moved to VHF high band and 17 moved to VHF low band.

Band I is known to include a lot of interference, so many customers avoided this frequency unless they were forced to go there due to economic reasons.

Many of the non-repack UHF stations now have 25-year-old IOT (inductive output tube) amplifiers that feature dual tubes for high-power DTV transmitters and are in need of an upgrade. The prevailing choice to replace this fleet of aging equipment is high-power, liquid cooled solid-state systems that fully support both ATSC 1.0 and 3.0 broadcasting.

According to Joe Turbolski, Vice President of Sales & Marketing at Hitachi-Comark, a station that’s running an older IOT in ATSC 1.0 can install a new ATSC 3.0 compatible exciter in their existing transmitter/amplifier and that transmitter will be compatible with ATSC 3.0. However, the power levels of these older transmitters could be compromised {reduced} when moved to 3.0.

“That’s because [older IOT systems] don’t have good peak power handling capability,” said Turbolski. “So, you will get something less and you’ll have to compensate for the lack of headroom.” 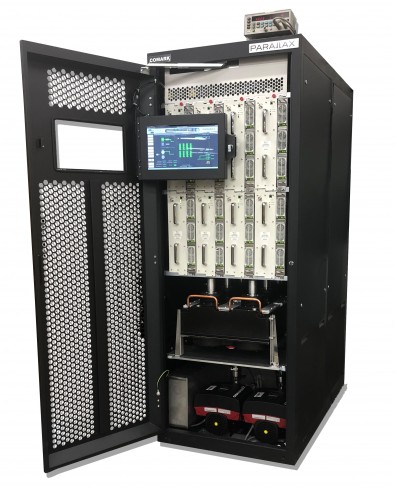 Virtually all of his customers that have made the move to Hitachi-Comark’s PARALLAX liquid-cooled solid-state transmitters, especially if they currently operate an IOT rig. These older IOT systems typically started at around 15-20 kW. Power levels below this were typically liquid or air-cooled solid-state systems using older amplifier technology. The changeover from IOT to solid state includes an easy conversion by pulling out the old two-cabinet transmitter and replacing it with a new two-cabinet 3.0 transmitter. The power levels and ERP will be virtually identical. As an example, an IOT that was rated at 20-25 kW will be swapped out for a new 27.5 kW PARALLAX transmitter with a better signal-to-noise ratio. Also, the new liquid-cooled system will run quieter (no fans) and cooler inside the building than its air-cooled counterpart.

“So, if you have a megawatt of ERP and you have 13 dB of antenna system net gain, that means you need about 50 kW (two tubes) inside the building,” said Turbolski. “So, we can slide out a two-tube transmitter and slide a new two-cabinet PARALLAX in and have the same power level with a smaller footprint.”

This makes for a simple upgrade path and in some cases stations can reuse the external RF filter/combiner system of their existing system. Again, the ERP is comparable, but the SNR performance is significantly improved. Because of the advanced correction that happens in these new exciters, users get a better SNR performance than they did with an IOT system.

This increased performance has to do with peak power handing capability. In digital, all transmitters are rated in average power, but because they are using a digital waveform (8-VSB in ATSC 1.0 and OFDM in 3.0), there is a peak to average ratio. In 8-VSB it was 6-7 dB of peaks that would happen above the average. If you’re at 10 kW transmitter power and your peaks are 6 dB, that’s 40 kW peaks that are happening at any period of time. As a comparison, in OFDM it’s 10 dB peaks, or ten times the power. Therefore, a 10 kW transmitter system will see 100 kW peaks—due to the nature of a digital waveform.

This also means that broadcast transmitters will need to produce approximately twice the amount of peak power with this new modulation as they have had to in the past to maintain their licensed average output power level. There are many ways to help deal with this change, including but not limited to, final amplifier configurations and operating points, as well as some “digital tricks” that can be accomplished in the modulators, all while trying to not have a negative

impact on performance or transmitter efficiency.

This new peak performance is also affected by an RF technology developed by Bell Labs in the 1930’s called “Doherty.” Replacing an IOT with a solid-state transmitter—due to Doherty amplification technology and because of the advanced correction that happens in these new exciters—produces a better SNR performance than an IOT rig.

The Doherty amplifier, named after its inventor William H. Doherty in 1936, was originally designed to increase the efficiency of high power vacuum tube AM and Shortwave broadcast transmitters. If a system needs to pass peaks, a Doherty pair transistor was used. Over the past number of years, transmitter equipment manufacturers have been applying Doherty to solid state DTV transmitters, thereby increasing transmitter efficiencies of DTV transmitters.

Up to now, all of the digital modulation used has been ATSC 1.0 or 8-VSB. The industry is now migrating to a new digital television standard called ATSC 3.0. The ATSC 3.0 standard uses OFDM modulation, which has a peak to average ratio or crest factor that is approximately 10dB.

In addition, even if linearization techniques are used to improve signal performance, there is a limit on a particular amplifiers ability to produce power with acceptable signal specifications. It appears that the limiting factor for this again will be a shoulder specification as the FCC has not changed the spectral mask requirements for transmitters when the modulation standard changes from ATSC 1.0 to ATSC 3.0, leaving the shoulder specification as originally measured.

Therefore, if a transistor that’s designed for a certain power level and it is pushed harder, the peaks are going to be clipped, which in turn will hurt SNR performance and cause the amount of the side band energy (shoulders) to increase.

When looking at the spectral plot of a signal, consider the flat part (measured average power spectral density) and the shoulder levels. The higher those shoulders come up on the waveform, the more concern there will be meeting the FCC rules regarding signal propagation (a “mask mandate” that is 47 db. down at the edge) and avoiding interference with an adjacent channel station’s signal.

“Further, if you connect those two shoulder levels together, that shows an approximation of where the in-band noise floor of the signal is. So, if you bring your shoulders up, you are effectively reducing the in-band signal-to-noise performance,” said Turbolski.

So, with an amplifier that has more peak power handling and a correction that can reduce or lower the shoulder levels, that increases the good-to-bad signal ratio. This correction comes from the exciter.

Turbolski explained “We sample the transmitter at the output of the amplifier and the output of the filter We look at what distortions have been introduced by the amplifier (nonlinear distortion) and correct for those. We also take a separate sample after the filter so we can look at the linear distortion of the RF filter system. It’s called frequency response group delay, and we can correct for both of those individually and really give the best performance of the system.”

A typical ATSC 3.0 signal flow from camera to transmitter. The technology is maturing and deployment is easier than ever.

Solid-State Is The Future

For those upgrading their transmitter, Comark-Hitachi is recommending that if a station is on a UHF channel and running a two-tube IOT transmitter, they should install a new high-power, liquid cooled solid-state transmitter. If they can reuse their existing RF mask filter system, that will be a less costly investment because all of the RF plumbing that’s typically installed in the ceiling can be repurposed. The more you can reuse, the less expensive overall.

“So, you’re replacing the IOT cabinets, as well as the heat exchangers outside and the pump system inside,” said Turbolski. “It’s a fairly easy upgrade for people that want to transition out of their old pre-repack IOT system and move to the new solid-state technology.”

Having optimum signal propagation will be key to leveraging all of the enhanced features—4K UHD, video, and mobile television support—of the ATSC 3.0 DTV broadcasting standard. There are several ways that a transmitter can be “optimized” to get the required performance at maximum efficiency and headroom. For those making the transition to ATSC 3,0, the path is clear and relatively inexpensive, considering the 20-year life span of a new solid-state transmitter and the new revenue it could potentially bring.