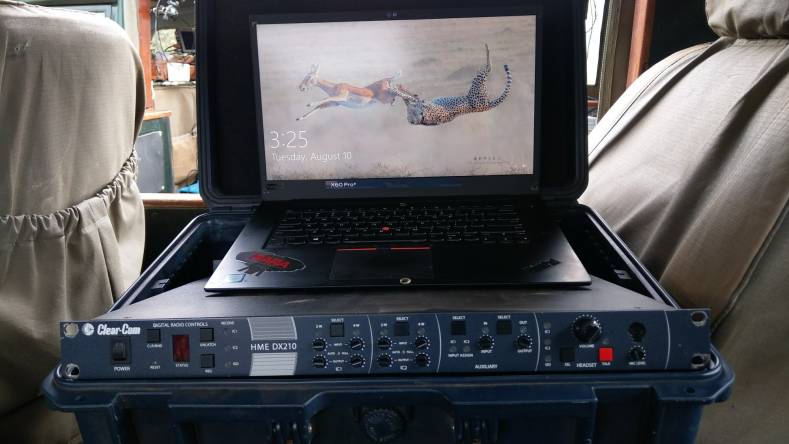 Ayaz Rajput, Founder of CATS Limited, was recently enlisted by renowned wildlife photographer, Jeffrey Wu, to assist with a first-of-its-kind live stream production of The Great Migration in Africa. Despite the novelty of this request, CATS’ existing DX210 system was the perfect standalone solution.

Kenya-based CATS Ltd serves as a distributor, integrator, technical support crew and rental partner for local broadcast needs. The company’s Clear-Com DX210 Digital Wireless Intercom has been a staple throughout their range of productions for the last nine years, from music performances to TV shows, talk shows, baking contests, esports, and most recently, live streams.

Award-winning wildlife photographer Jeffrey Wu was commissioned by video sharing social networking platforms TikTok and Douyin to curate the content of the live stream, bringing together a global community of viewers into this spectacular display of wildlife. The Great Migration occurs with a change in the season, prompting millions of wildebeest, zebras, gazelles and more to migrate from Tanzania’s Serengeti to the more fertile grasslands in Kenya’s Maasai Mara.

Ayaz and Jeffrey Wu’s longstanding local production partner, Irfan Kassam, joined together to provide the technical expertise for this five-day event, where app users could tune in to watch the action unfold.

The project required seamless communications between two tour vehicles, each outfitted with three cameras, a vision mix, audio mix and streaming equipment, powered by onboard inverters and solar generators during the many hours of operation in the field. The DX210 main station was in one vehicle, with the antennas oriented outside the vehicle and a BP210 2-channel 2.4 GHz wireless beltpack deployed in the second vehicle. With Ayaz in one vehicle, and Ifran in the other, this configuration provided the channel to coordinate vehicle movements, technical trouble shooting and any other intervehicle communication.

In the open plains, the production team was able to easily achieve 100-150 meters of wireless intercom range which allowed enough distance between vehicles for the two hosts who were narrating the content—one speaking Mandarin and the other speaking English—to not interfere with one another, while still allowing Ayaz and Irfan to communicate over the comms.

TikTok and Douyin also partnered with the Kenya Tourism Board, the International Fund for Animal Welfare and Conservation International in this event aimed to promote the importance of biodiversity and to inspire wildlife protection around the world.

“I am honored to be a part of such a noble cause,” said Ayaz, “It’s crazy to think that such a small team, with the help of a single DX210 system, could bring this message onto a global platform. After nine years of service in the industry here in Nairobi, clients and crew have become accustomed to our Clear-Com system which is synonymous with the high quality of service that CATS Limited is known to provide.”