Numerous field tests have proven the reliability of real-time remote HD acquisition over a 5G connection.

For the past year an international group of technology companies, funded by the European Union (EU), has been looking into the use of 5G technology to streamline live and studio production in the hopes of distributing more content to (and from) viewers faster and more efficiently. Due to the restrictions imposed because of the coronavirus, most of the work thus far has been completed remotely.

Known as the 5G-Virtuosa project, the goal is to explore “Scalable Software Defined Network Architectures for Cooperative Live Media Production exploiting Virtualized Production Resources and 5G Wireless Acquisition.” The initiative follows a recent EBU report that found 5G is capable of meeting the distribution requirements of both public service and commercial broadcasters. However, the report stresses that there remains significant structural barriers that will need to be overcome to realize 5G’s full potential.

The project endeavors to develop a product of the same name that will make live media production more effective, more cost-efficient and easily scalable, by virtualizing of network and production resources. This new generation of media networks is based on 5G-wireless communication and on technology already widely in use in IT, but was until recently not considered suitable for broadcasting. They include Internet Protocol (IP) technology, Software-Defined Networking (SDN) technology, Network Function Virtualization (NFV), High Performance Computing (HPC), and Cloud Computing.

Project participants are trying to enable virtual connections of any studio, control room and on-site production across multiple locations, and live feedback from the audience straight into the production chain via 5G acquisition. It will also allow media production facilities, equipment, resources, and talent to be shared across locations, supporting Cooperative Live Media Production with real-time transport and processing of live media over IP over a 100Gb/s connection. 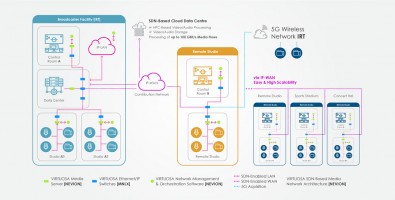 The eventual Virtuosa virtualized production system will be based on three core technical elements: Architecture, Equipment and Software.

As a result, according to the 5G-Virtuosa Project website, live media production costs will be reduced by 30-40%, and more live content can easily be produced in parallel and at the same cost level.

In June the participating companies—the Institute for Broadcasting Technology (IRT, in Germany), LOGIC Media Solutions GmbH (also in Germany), Mellanox Technologies LTD (Israel), and Nevion (Norway)—completed their first round of technology integration, building an IP-based studio initially at Nevion’s Service Operations Center (SOC) in Gdansk, Poland and subsequently moved to IRT’s facility in Munich. The IRT tests are continuing to focus on compliance specifications based on industry standards SMPTE ST 2110 and NMOS.

“After a slight delay because of the COVID-19 situation, we are pleased that we are now in a position to start testing,” said Markus Berg, Head of Future Networks at IRT, an internationally renowned research and innovation center for audiovisual technologies. “The set-up is the fundamental building block that we will be using to create the 5G remote production planned for later phases of the project.” 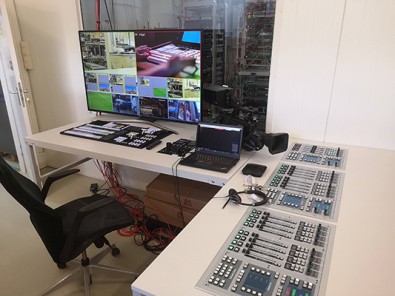 During testing at Nevion’s Service Operations Center in Gdansk, products from multiple vendors was integrated in a SMPTE ST 2110 compliant environment.

The first phase of the project involved setting up an IP-based studio, built on industry standards (SMPTE ST 2110 and NMOS) and integrating equipment from multiple vendors, including: video cameras, a vision mixer, and a server from Sony; a multiviewer from TAG Video Systems; an audio mixer from Stagetec; a media analyzer from Telestream; IP switches from Mellanox; a PTP-compliant time and frequency synchronization from Meinberg; software-defined media nodes from Nevion. The overall architecture is being managed by an orchestration and SDN control system from Nevion.

Interest in 5G technology for professional production is not new and has only grown now that 5G service is widely available around the globe. In fact, at the 2005 IBC Show in Amsterdam within “Mobile Zone” a variety of mobile broadcast proposals—including DVB-H, DMB, DAB-IP, ISDB-T and MediaFLO—were demonstrated in prototype form.

3GPP, the global telecommunications standards body, has extended its timeline for the next 5G specification, which will be key to broadcasters’ signal distribution requirements. Known as Release 17, the group’s publicly stated schedule now anticipates completion in 2022, with a freeze in March 2022, followed by coding protocols frozen and stable in June 2022. From this new broadcast applications are sure to emerge, based on a more versatile 5G core.

At the end of the day, the companies now involved in the 5G-Virtuosa project hope to demonstrate how 5G wireless technology can be combined with virtualization to allow broadcasters to produce live content such as sports or music coverage more efficiently and cost-effectively.

“Compliance to standards is a key part of the tests, and very important for IRT,” said IRT’s Berg.

The 5G-VIRTUOSA project has received funding from the European Union’s Horizon 2020 research and innovation program under grant agreement No 866656.