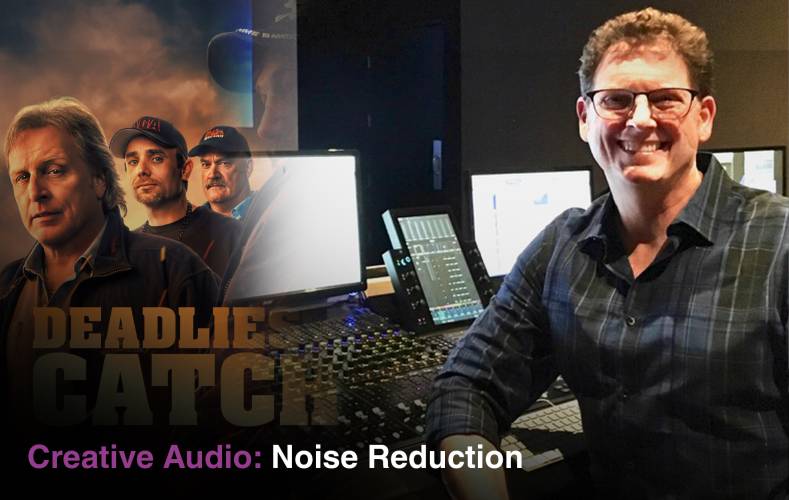 Dialogue is king in television. Let’s face it, you don’t watch an episode of your favorite police procedural or reality show just to listen to the sound design or the incidental music. But whether the content is scripted or unscripted, delivering intelligible dialogue can be a real challenge for the show’s mixer.

It isn’t just reducing or eliminating noise that’s challenging, it’s the amount of time available to do it, says Bob Bronow, a Los Angeles-based Emmy, CAS and MPSE Award-winning sound designer and re-recording mixer. “I’ve found in scripted shows that the schedules are so compacted, and you’ve got to work so fast, that you don’t really have time to stress over every little thing that you hear,” he says.

“You need tools that are going to work in broad strokes and allow you to zero-in on the big offenders. The cool thing is that now there are a lot of products from a lot of different manufacturers that do a really good job with this.”

It’s important to have more than one tool in the arsenal, he says. “I’ve got 10 or more different noise reduction plug-ins that I use for all sorts of different things. Some work better than others. Some work really great to bring most of the noise out, so I can focus on the stuff that really needs attention, but I don’t have to stop every second and a half to get rid of noise.”

Bronow has had years of experience with production audio recorded in tricky environments, including working on the first 15 seasons of Deadliest Catch, currently in its seventeenth season on Discovery. The documentary series follows the fortunes of the Alaskan king and snow crab fishing fleet in the cold and stormy Bering Sea. Bronow was nominated 12 years running for a Primetime Emmy Award in recognition of his work on the show, winning twice.

Creating the Best Mix
“On a show like Catch, the mixes took about 30 hours,” Bronow reports. “That included a lot of the sound design.” He had come on board with Original Productions a couple of years earlier and helped build out an audio post room at what became the multi-room Max Post facility in Burbank, California.

“I was working on staff, so if I wanted to take more hours because I wanted to make something sound better, that was fine; no one cared. But on a scripted show, it may be an hour or 45 minutes long and you may have two days to mix it. That really means you have one day and part of the next morning,” he says, since day two is when the executives view the playback and give their notes.

Happily, the implementation of AI (artificial intelligence) in many software noise reduction products has helped speed up the cleanup process. “I want my software to be smarter than me,” Bronow says. “You can let me know what you did, but just take care of it.”

Challenging Recording Conditions
There was always noise on the production tracks for Deadliest Catch, with the waves crashing, wind lashing and a constant drone between 200 Hz and 700 Hz from the boats’ diesel engines. With no space on the boat for a production mixer and the show’s two onboard producers keeping one eye on their cameras and another on the hazardous conditions, the audio would often suffer from over-modulation and clipping on the crew members’ lavalier microphones.

Indeed, as Bronow has noted previously on The Broadcast Bridge of the four to six tracks of dialogue that he would typically receive, one would be bad and the others worse.

On that show, as with any other, he says, the most appropriate noise reduction tool will vary. “This is really where experience comes in. There are times where I’ll reach for the thing that is the quickest. If it’s just some high-end, or low-end rumble, I’ll just reach for some EQ or a filter.”

But the noise may be a little more complex. “If it’s a little hum it’s easy enough to notch out and you don’t have to throw the kitchen sink at it. But then there’s stuff where there is no way you can do it with EQ or filters without destroying the whole sound,” he says. “Then you have to reach for the big guns.”

But even then, he says, “You need to be pretty judicious about that stuff. I would prefer a little more noise and not have funky-sounding artifacts going on. If you’ve got a noise floor in there and it stays consistent, that sounds natural. But if something is over-processed and it sounds like they’re talking in a vacuum or it sounds like ADR it sounds unnatural.”

Unpredictable Noise Sources
Noise reduction software has saved his bacon a few times, he says. Years ago, on an episode of Storage Wars, the director shot an interview in front of a small gold smelter. “If you have never heard a gold smelter, take a whole bunch of really high-pitched squeals then scratch your fingernails down a chalkboard,” Bronow laughs. “But the noise reduction software was brilliant; I could see every one of the harmonics and eliminate them.”

Dialogue intelligibility may be paramount but there may be some wiggle room, especially in unscripted or reality programming. “If something gets texted on the screen because you can’t understand it, people accept that. My personal goal is to make sure we don’t have any of that,” he says, but it’s there as a fallback. “But you never see a scripted show that has subtitles other than foreign language translations or if it’s part of the story.”

Since moving on from Deadliest Catch, Bronow has also been working on episodic series such as National Geographic’s Genius, a dramatized look at the lives of Albert Einstein, Pablo Picasso and Aretha Franklin, for which he won an Emmy. He recently also completed How to Become a Tyrant, a docuseries on authoritarians for Netflix, and is currently finishing up BET’s The Encore, a reality singing show.

Post Fix
Noise is to be expected on a crab fishing boat but even on episodic shows there are challenges, he says. Where possible, noise reduction starts at the source, with the production tracks. But conditions are rarely perfect, on location or on set, leaving Bronow with plenty to do in post.

“I worked on one show where they built all the sets in a warehouse. The bedroom set was built right underneath the HVAC unit on the roof. All of a sudden, you’d hear this noise,” he says, imitating the sound of an air conditioner.

Location shoots may be no better. There is always the likelihood that there will be traffic noise or aircraft flying overhead, of course. Bronow recalls mixing one show where there was a scene on a deck overlooking a lake. “It looked beautiful. The only problem was that it was about a hundred yards away from a shooting range. We had to get rid of a number of gunshots.”

It helps to have a relationship with the production mixer, he says, particularly when working on a series that is still being shot. “That’s the best kind of relationship to have, because they’ll tell you: ‘Episode seven is going to be tough because we recorded it in this place and they wanted to do wide shots and we couldn’t get a boom mic in there.’”

Even if the production mixer has the ear of the director, the show’s budget or the schedule can work against the possibility of a reshoot when there are noise problems during a take, Bronow also points out. “They will say they can’t do anything about the AC unit on the top of that building.”

Getting the Shot
That said, he recalls the story of a production mixer who was suddenly nowhere to be found as the director was about to shoot the next scene. “Someone said, ‘He’s on top of that building over there wrapping the HVAC unit with blankets.’ If you’re lucky you can do that, but sometimes the sun’s going down and you’ve got to get the shot,” Bronow says.

There are now noise reduction tools available to production mixers, too. “For live broadcast and news that’s terrific, but it got re-recording mixers’ hackles up. We don’t want to be locked into anything that we can’t undo,” he says.

Bronow discussed it recently with a friend who is a production mixer and discovered that he monitors a mixdown of his mics with noise reduction engaged. “He said, ‘I know that if what I’m hearing on the regular track has some noise, and on the noise reduction track it doesn’t, the mixers will be able to pull out the noise.’ He knows it can be fixed and doesn’t have to ask for a reshoot.”

Ultimately, with his experience and the tools at his disposal, Bronow is confident that he can make anything that anyone throws at him sound better. “How much better depends on a lot of different factors,” he says. “But I can almost always make it better.”