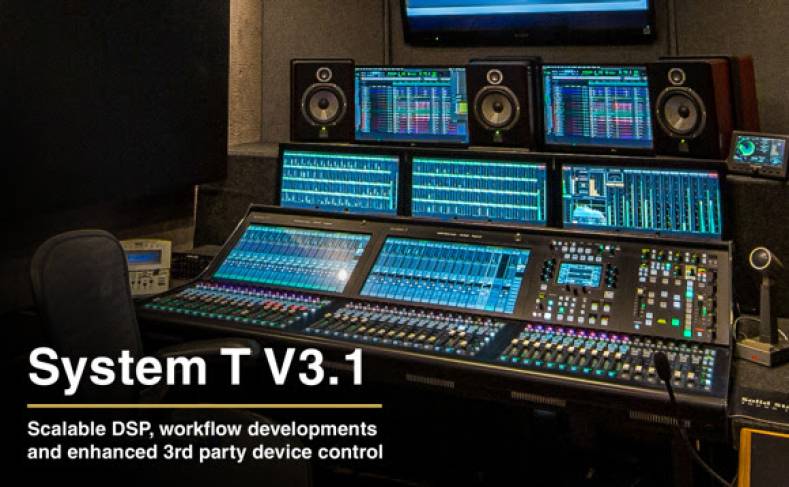 The latest update, V3.1, includes support for forthcoming new Tempest Engines with flexible and agile processing capacity licences, along with a host of new production features.

Core to the release is support of the next generation TE1 and TE2 Tempest audio engines. These compact engines provide a flexible model for managing production capacity, allowing users to expand their processing requirements with the addition of new software ‘processing’ licenses. With the inclusion of an agile ‘pay as you go’ model, users can increase their production capability for user-defined project periods such as large one-off sporting or entertainment events. The new Tempest engines will be available to customers as of August 2021.

With AoIP at the core of System T, including automatic discovery of Dante devices and AES67/ST 2110 streams via SAP, audio patching is presented via a simple and intuitive GUI, with full mono routing capabilities. IO management provides logical representations of signals on a self-discovered database. V3.1 includes improvements for managing dynamic and frequently changing AoIP networks, and additional access control entries for enhanced security of IO and wider console features. With a focus on interoperability and integrating third party devices, V3.1 also provides control for Focusrite’s Dante enabled RedNet MP8R Mic IO directly from System T consoles, allowing customers to utilise this popular IO box with controls from the console, plus parameters stored and recalled with scenes and showfiles.

Additional production focused features include the new ‘Send Stems’ mode, allowing standard subgroup (on/off) type stem to be switched to a bus with a send level, useful for efficient effect return signals or discrete feeds to outputs that require an independent mix. The ‘Path Recall Safe’ feature is also extended to include individual path processing blocks, providing a quick and simple way from within the ‘Channel View’ to recall safe a particular path section when firing scenes.

Tom Knowles, SSL Broadcast Product Manager, is clear on the significance of the release in light of developing production requirements. “As we continue to broaden our System T offering, it’s essential we provide an agile solution that allows customers to scale their production capacity based on their schedules. This release delivers this and more, and with future developments increasing our remote access capability, our work will eventually lead to more advanced scenarios where clients won’t need to rely on just on-premise processing and control.”