The VisionXS systems have a bandwidth of 10G.

The VisionXS systems are described as high-performance KVM extenders with a bandwidth of 10G and video transmission for resolutions up to 4K. Previous devices from the manufacturer support a data transfer rate of 1Gbit/s per line. However, with a bandwidth of 10 Gbit/s, VisionXS “opens up a new dimension of possibilities.” It says, frequently changing image content now requires significantly less compression thus improving the user experience. Initially, the German manufacturer will provide extender modules for KVM-over-IP, followed by solutions for classic KVM systems for direct transmission.

An important advantage of VisionXS extenders is the ability to combine them with G&D's matrix systems. For customers, this means even more flexibility, because VisionXS products can either be operated in pairs as an extender line or they can also be integrated into matrix installations. Users will also have one hardware for everything in the future. Like any other G&D product, the new devices are compatible with existing models.

In a first step, a high-end system for DisplayPort UHR with a transmission bandwidth of 10G will be launched, followed by devices for HDMI and DVI-I. For the VisionXS series, the manufacturer also relies on its lossless compression High Dynamic Image Processing, “which enables authentic, pixel-perfect video experiences”. In addition, dual head modules allow the transmission of two video signals via one transmission cable. These modules offer significant advantages: Two video signals transmitted over one line saves 50% of cabling or KVM modules, the vendor claims.

The new VisionXS-IP-DP-UHR system is compatible with the central ControlCenter-IP appliance. Combined, these units form a powerful matrix for KVM-over-IP. This means that each connected workstation can be granted access to any computer connected to the KVM system. While the network infrastructure takes over the transport of KVM-over-IP using layer-3-network switches, the ControlCenter-IP contributes the logic. Both the dynamic access and the use of KVM-over-IP make the application even more flexible. Secure and reliable operation is ensured by AES-128 encryption and the regular exchange of security keys. G&D says extensive security features such as the use of VPN and G&D's UID locking are already implemented. 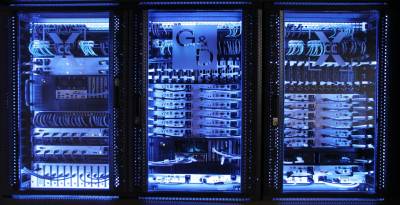