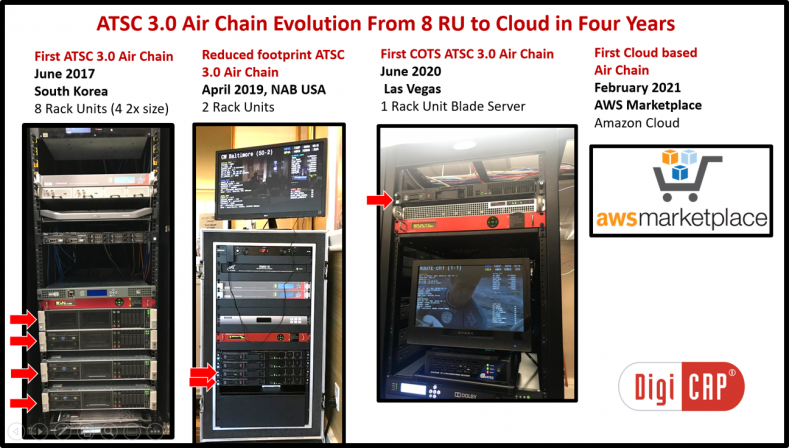 In the four years since ATSC 3.0 Air Chain technology was first introduced in 2017, it has gone through three evolutions. The first installations were used in preparation for the 2018 Winter Games in PyeongChang, South Korea. DigiCAP provided Air Chain technology for all three major South Korean broadcast networks, enabling them to transmit live 4K over the air during the 2018 Winter Games. These first-generation Air Chains were eight rack units (RU) tall.

After the PyeongChang games, DigiCAP analyzed data from their 14 live ATSC 3.0 broadcast sites. Two years later they introduced an improved version that was only two RU tall, a 75% reduction in size.

But the inside changes were even more significant. According to Sang Jin Yoon, SVP Business Development at DigiCAP, “We took data from extensive field tests at our Korean broadcast sites and analyzed the data using static and dynamic code analysis to holistically optimize our software. In addition, we rebuilt the software to be more useful in the US, including improving the user experience by redesigning the system administrator, making our software compliant with the evolving ATSC 3.0 spec, and providing more meaningful system status information, and adding features to make DigiCaster more operation friendly.”

From 2 RU To A Single COTS Blade Server

in June 2020, as the first commercially licensed ATSC 3.0 broadcast stations were launching in the US, DigiCAP introduced a new version on a single RU COTS blade. Added Yoon, “Every year COTS servers get less expensive and more productive. The use of software infrastructure in this configuration is a way to take advantage of the savings and efficiency boosts.” He continued, “Migrating from appliance to software is the unstoppable trend.”

From A Blade Server To The Cloud

In February of this year, DigiCAP posted the first ATSC 3.0 Air Chain on Amazon Web Services (AWS). This service will enable installations to go more quickly and let broadcasters pay for their Air Chains with a low monthly service fee instead of a large upfront equipment charge.

In just four years, DigiCAP Air Chains have gone from the first eight RU installations in South Korea, to two RU units in the US, to a single COTS blade server, to the first cloud application.

Concluded Yoon, “Our software infrastructure approach is catching on. Of the 28 US markets that have launched ATSC 3.0, DigiCAP has one or more users in over half of them. Add to that the 14 broadcast stations we have in South Korea and it makes a solid footprint for moving forward.”