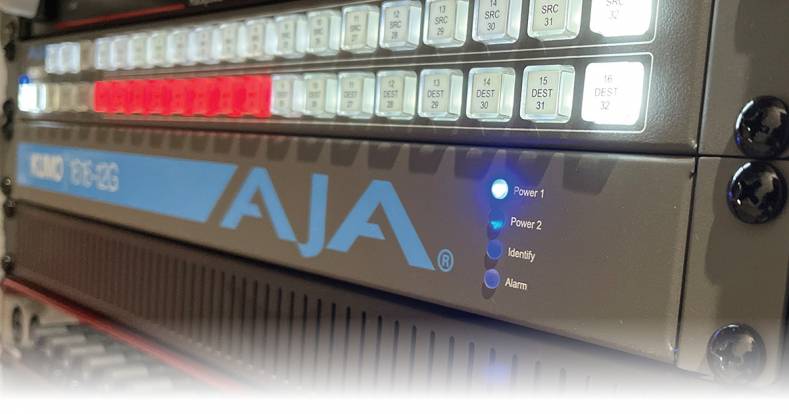 “The Tony Baker Show” and “Keep Your Distance, Presented by KevOnStage” were two of the most-watched indie stand-up comedy specials during COVID-19, averaging 8,000-15,000 household viewers per episode.

The sister series aired 20 live shows between July 2020 and April 2021, helping to lighten the mood for fans at home during pandemic shutdowns. Under the direction of Transit Pictures, with the involvement of Invictus Entertainment and Technical Director Arthur Khoshaba, both series were filmed on an outdoor stage at Transit Pictures in LA and live streamed to remote audiences in 1080p, using a live production workflow with AJA KUMO 1616-12G at the core for SDI signal routing.

To bring live comedic performances to fans at home, the show workflow entailed a custom vMix rig developed by Khoshaba for live switching between five Canon C300 Mark II cameras. The vMix rig featured eight 12G-SDI inputs for incoming high-bandwidth video and audio signals. During development of the show workflow, Khoshaba required a routing solution to enable multi-views of all five cameras for the DP as well as the lighting and sound teams.

Because the shows were filmed in the evening on an outdoor stage, the DP and director had meticulously fine-tuned the cameras and exposure settings to follow the sun and amplify lighting at nightfall. To unify the look across cameras under changing lighting conditions, a router would allow the DP and crew members to flip through each look and view cameras on-the-fly during live shoots to maintain color and consistency. Khoshaba selected an AJA KUMO 1616-12G to perform live routing for camera multi-view purposes.

“In my opinion AJA offers the best 12G routing on the market, and I’ve always been a huge fan of AJA gear,” shared Khoshaba. “When I first got started in the industry over a decade ago, the first piece of equipment I ever used on a show was an AJA Ki Pro recorder. To this day, that Ki Pro is still in use, and it’s been used on thousands of shows throughout the past 10 years.”

During live stand-up performances, KUMO 1616-12G provided the crew with the flexibility to route camera signals to different locations on set to help capture the highest quality imagery. Though both comedy series were filmed in 1080p due to outdoor set conditions, Khoshaba is equipped to scale the workflow and capture 4K 60p for future productions using KUMO 1616-12G, which supports the highest raster 4K/UltraHD imagery over 12G-SDI.

Khoshaba added in closing, “Before COVID-19 hit, not many small or indie productions were delivering 4K content. We saw this coming for years, as 4K had been widely adopted by higher end studio productions, but COVID-19 triggered a leap forward in technology. The great thing about it is with KUMO 1616-12G, my workflow is future-proof and I’m ready to take on bigger projects. During live shows I can also rest assured knowing trusted and reliable AJA gear is handling routing.”