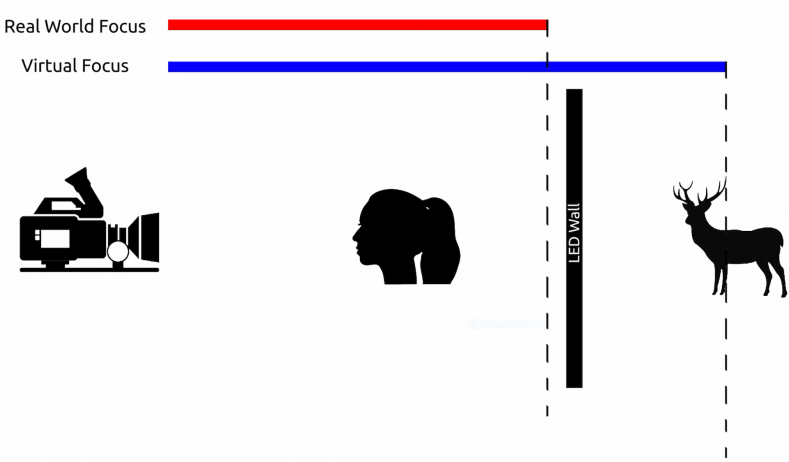 Mo-Sys has solved a major creative limitation when using an LED volume for virtual production.

Cinematographers who needed to pull focus between real foreground objects – such as actors – and virtual objects displayed on an LED wall – such as a car - have been unable to do this as the lens focal plane stops at the LED wall, meaning the car always remains out of focus.

Now, with Cinematic XR Focus, Focus Pullers using the same wireless lens control system they’re used to, can pull focus seamlessly from real objects through the LED wall to focus on virtual objects that appear to be positioned behind the LED wall. The reverse focus pull is also possible.

Cinematic XR Focus is an option for Mo-Sys’ virtual production software VP Pro working with Mo-Sys’ StarTracker camera tracking technology. Cinematic XR Focus synchronises the lens controller with the output of the Unreal Engine graphics, relying on StarTracker to constantly track the distance between the camera and the LED wall. The solution is available from Mo-Sys and is compatible with Preston wireless lens controllers (Hand Unit 3 and MDR-3).“

“But there have been limitations. Pulling focus – a fundamental part of the grammar of movies, to direct the audience’s attention to different parts of the screen – has been difficult. The Cinematic XR Focus software add-on transforms the possibilities, allowing Cinematographers to freely realise their creative ambitions.

”Recent advances in LED display technology have meant that it is now perfectly practical to shoot in-camera VFX shots in real-time. Having the finished virtual graphics on the LED wall means that there is no green/blue spill to remove in post-production, as the LED volume casts the correct soft lighting around the talent. All this reduces the cost of post-production compositing which, along with the savings in location costs, make virtual production a financially attractive and time-saving choice for producers.