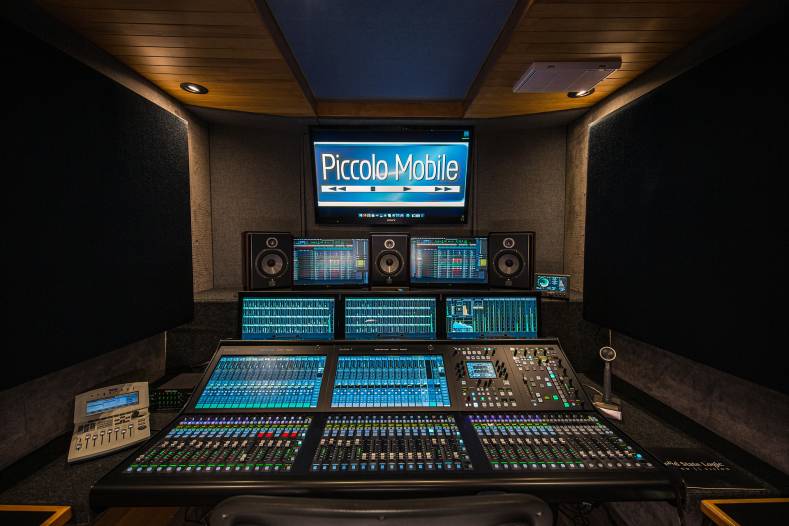 Piccolo Mobile’s team integrated the new System T into the larger of the company’s two trucks, PM2, between Christmas 2020 and the new year. “We also upgraded Pro Tools in there to record 192 tracks,” says Savage. “We have four Pro Tools systems in each truck, two to record and two to mix, so they are redundant.”

The truck’s first gig with the System T was a project with the Montreal Symphony Orchestra. It was then positioned at MELS studios in Saint-Hubert, a Montreal suburb, for the months-long production of Star Académie, one of the francophone province’s top-rated TV shows.

“It’s a massive show with a bunch of singers and a bunch of guests,” says Piccolo engineer Charles-Émile Beaudin, who works in the truck with show mixer Simon Bélanger. The show generates about 140 inputs, including more than 20 vocal microphones, and typically features over 30 songs per episode. The lines from the stage, which is in-the-round in the absence of a studio audience during the Covid-19 pandemic, split to three FOH and monitor consoles in the house and are transported over MADI to the System T in the truck outside.

Bélanger uses Layer Manager in System T’s software to reposition the faders that he needs for different segments of the show at his fingertips. For instance, during one part of the show, contestants each sing one line of a song in turn. “Having the Layer Manager is a great factor to help us go fast when it’s medleys. I put all the vocals in a row, and I can just travel down the faders,” says Bélanger, who is able to quickly raise and lower each singer’s level in quick succession.

During the mash-up part of the show, one singer will take the lead before switching to background vocal while another singer takes over. “That’s where the System T also comes in handy, switching the stems, reverbs and panning. It’s really fast,” says Bélanger.

System T’s processing and effects rack is regularly put through its paces as the young contestants find their voices, says Beaudin. “They’re being coached each day and trying different things. The timbre of their voices changes dramatically from song to song and day to day. So we use a lot of dynamic EQ and different reverbs and effects.”

The Star Académie 2021 production is complex, what with so many live microphones and the pace of the production leading up to each live broadcast, says Beaudin. “It’s really not simple and we’ve got to do it quickly. But the great thing about System T is that it manages this easily. There’s a ton of ways to get in and out of the console. We send record tracks to the stage and they send us stuff that doesn’t go on-air. We both have talkback in the truck and use matrixes to route that. But it has way more range than the way we use it. And I don’t think we have ever said no to a request.”