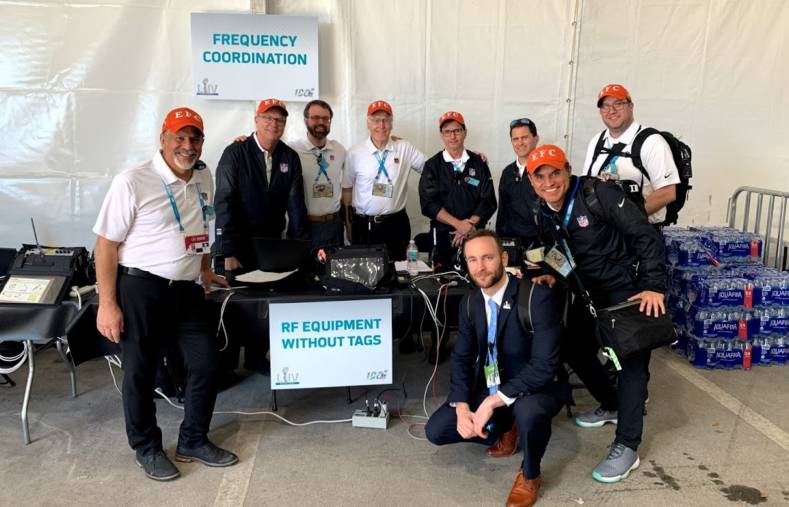 The Super Bowl LV EFC staff will check-in, label and confirm that RF devices won't interfere with each other. Photos courtesy NFL.

During Game 1 of the 2015 World Series in Kansas City “a rare electronics failure” caused the loss of power from the Fox primary and secondary generators. It halted the game for 7 minutes because umpires couldn’t see replays.

In 2013, during the 2nd half kickoff in the CBS broadcast of Super Bowl XLVII, the New Orleans Superdome lost power, halting the game for 34 minutes. Auxiliary power kept the playing field from going totally dark, but escalators stopped, credit-card machines shut down, and concourses were dimly lit by small banks of emergency lights. CBS lost numerous cameras and some audio powered by Superdome circuits but used its backup power to stay on the air.

The crowd may be smaller than usual, but Super Bowl LV coverage is subject to the same electrical and electronic potential problems and failures as other world championships. The Broadcast Bridge recently interviewed John Cave, Vice President IT, Football Technology Solutions at the National Football League about RF frequency coordination at this year’s event.

How will a smaller crowd impact RF use in the stadium? “Having fewer people in the stadium will limit the number of devices consuming WiFi and cellular services. Verizon has deployed their 5G UWB and CBRS services in Raymond James stadium allowing our guests to experience extraordinary data performance.” The allowed crowd size is to be announced, but some are anticipating approximately 25,000.

Cave anticipates smaller numbers this year. He said, “Our broadcast partners have not reduced their RF requirements, however with limited media presence we expect to receive fewer frequency requests for their use.” The EFC team is ready to check out wireless mics before they are checked in.

“We coordinated approximately 900 frequencies during Super Bowl LIV,” Cave said. “All Media are required to enter the stadium at our media entrance. All RF devices must be checked-in, labeled and confirmed by our Event Frequency Coordination (EFC) staff.” The EFC team includes 12 EFCs.

How many unauthorized transmitters do you usually find at Super Bowl? Is the trend more or fewer? “None, or close-to none,” Cave said. “We communicate the requirement very clearly during the credential process so very few people slip through. Also, since every NFL game and event is coordinated via the EFC portal, most members of the media are used to the standardized process. The days of needing to know the name and email address of a specific frequency coordinator is no longer necessary.” All EFCs can access the standardized source of RF data.

Cave continued, “We schedule an ‘RF Wars’ date where we require all wireless devices to be operated several days before the game. During this test, we're able to identify any issues and address them well before kickoff. Last year we identified a helicopter operating on an adjacent frequency that affected an in-stadium device. Simply changing the perimeter of the helicopter resolved the issue.” Directional antennas and spectrum analyzers are used to monitor frequencies in use through game day. 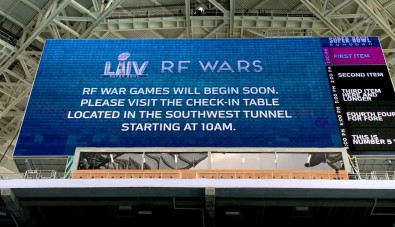 RF Wars has proven to be an effective pre-event interference test.

Cave told The Broadcast Bridge, “There’s years of planning and coordination with our partner in Verizon to ensure optimal performance. Verizon has installed 5G in the stadium in addition to CBRS.” Texting is fast and reliable during the game. “We have not experienced interference from cellular data services in the past and don’t expect that to be an issue this year.”

Bonded cellular manufacturers agree with Cave. Pierre Kawka, our Director of Strategic Events at LiveU told The Broadcast Bridge “The smaller attendance figure will reduce the congestion for bandwidth to some degree,” he said. Countermeasures such as LiveU’s priority sim service will still be the best solution to offset the congestion created by a mega event such as the Super Bowl.

LiveU will provide onsite support as well as rental and priority sim service. “Typically LiveU does offer WIFI hotspot service however due to the restrictions by the NFL for Covid protocols, this year LiveU will not offer this specific service, Kawaka said. Media RF gear will receive a permission or denial label for each event.

TVU Networks VP of Marketing Eric Chang told The Broadcast Bridge “An expected smaller crowd and the COVID precautions are going to have an impact on the event when compared to prior Super Bowls. As such, from our perspective, we would expect to see less contention on the cellular networks than at previous events. We expect this Super Bowl to go as smoothly for us as the prior nine we’ve supported.”

“New this year,” he said, “we are offering on-site camera crews through TVU Media Services. By using our camera crews, broadcasters can use remote production or remote reporting from their studio or other location away from the venue but provide live stadium location coverage to their viewers.” 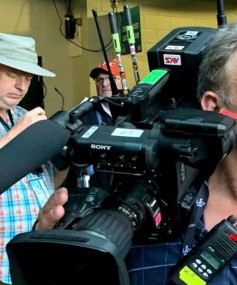 Labels on antennas indicate the gear has been checked and cleared.

Chang predicted, “There is no expectation of a slowdown. TVU customers have successfully transmitted live from within venues during the game for previous Super Bowls. Our proprietary IS+ technology is the state-of-the-art transport algorithm and performs well in these challenging environments. Having said that, we do believe in smart contingency planning. For example, the use of Ethernet drops for post-game transmissions from the field is usually recommended, as is adding WiFi hotspots to the aggregate is desirable when practical.”

He continued, “There has been very little interest by our customers to supply this type of bespoke infrastructure. Our customers value the flexibility and mobility to go where the story demands and have come to expect the versatility of the TVU packs ability to work wherever the story takes them.”

Chang is confident “Our TVU One cellular portable transmitter can deliver reliable HD and 4K picture quality by using integrated HEVC and patented IS+ video transmission technology regardless of the wireless transmission environment. Even around congested venues, TVU One can transmit in full HD or 4K with support for HLG and HDR at sub-second latency.”