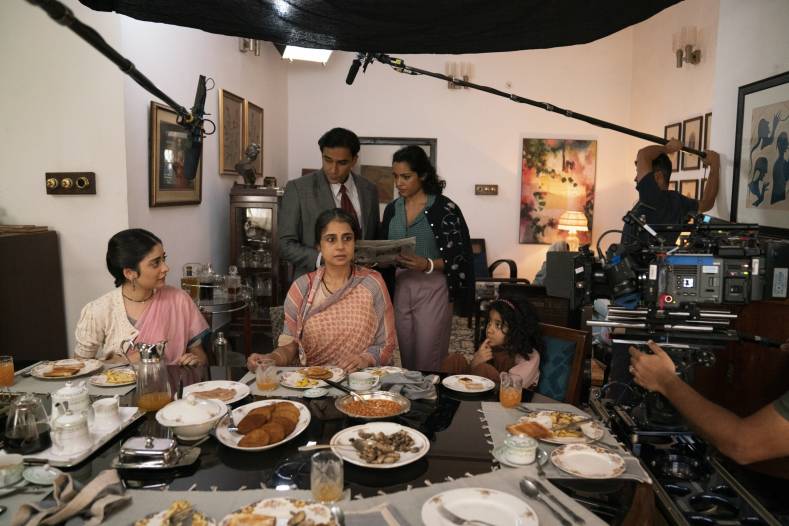 Produced and directed by Indian-American filmmaker Mira Nair, A Suitable Boy tells the story of spirited university student Lata (Tanya Maniktala) as she comes of age in North India in 1951, at the same time as the country is carving out its own identity as an independent nation and is about to go to the polls for its first democratic general election.  The series involves more than a hundred characters, many belonging to one of four extended families.

Mira Nair has been trying to make a live-action adaptation of A Suitable Boy ever since its publication in 1993, but the BBC Studios-owned UK production company Lookout Point only recently secured the rights. “I’ve worked with Mira for a long time, with a history that goes back to 1996 with Kama Sutra: A Tale of Loveand Monsoon Wedding in 2001, which was a homage to the book of A Suitable Boy,” said Quinn. “Aesthetically we’re on the same page. Mira starts with a ‘look book’; paintings, fashion and location pictures from her first scouting trip to India, then I add images from other movies or photographers and we narrow everything down to create a cinematic grammar for the story.”

Quinn first used Cooke lenses in film school in the 1970s. “I knew they were something special,” he said. “I love the Cooke vintage lenses, the 25-250mm big Varotol zoom lens and then the 20-60mm zoom, it is just a beautiful lens that covers the focal lengths I like for hand held work. The sharpness and ability to keep close focus is unparalleled for a zoom lens of that time.”

Quinn’s only problem with using his vintage 20-60mm zoom today is that it doesn’t cover large format sensors. “I just can’t go all the way wide – 25mm is about the widest in 4K,” he noted. But in 1998, Quinn found another set of Cooke lenses to love. “When the original S4/i primes came out, I tested them. That’s all it took for me to use them on every film for years, and I also started experimenting with vintage glass, like the Cooke Speed Panchros.”

Quinn was so comfortable with his choice of the Cooke S4/i primes that he didn’t even do any lens tests. “I’ve got a long history with this lens and the Cooke Look®. I knew what Mira was after and the S4/i delivered what she needed, while giving me what I needed: true colour, flesh tones – where the warmness of the Cookes worked wonderfully with the warm Indian flesh tones, sharpness across the entire field, a coating that’s great for flare and exterior work, and reliability in a hot and dusty environment. The S4/i’s were a solid choice for this project.”

One major change made after the first week of filming was to discontinue using the vintage Speed Panchros. “They flare differently than the S4/i does,” explained Quinn. “With the S4s, I have more control with the flare and colours, so I decided to stick with the S4/i’s because it is easier to grade when intercutting footage shot by two different units.”

With a very dialogue-driven script with many characters, Quinn’s tendency was to approach A Suitable Boywith natural light and to see faces most of the time, as opposed to silhouette. “We would have the camera move through a scene from a certain character’s perspective – usually Lata’s [the story’s heroine]. Tom Walden, our A Cam/Steadicam operator would keep a moving master shot where most of the scene played out. This wasn’t a wide shot, but a very useable shot where the camera would flow through the space to follow the gist of the conversation. It was all choreographed, and we would use cuts to cover the other characters as they needed to be covered.”

Quinn’s hero lenses for A Suitable Boy were the 32 and 40mm. “Those have been my favourites for most of my career,” said Quinn. “They represent the human visual perspective the best and are great at separating the actors from the background. And with a 2:1 [18:9] aspect ratio, the 32/40 combo works very nicely.”

With large format sensors becoming more commonplace, Quinn does have some experimenting to do. “The S4/i are great lenses, but I’m looking forward to testing the S7/i for larger format projects.”