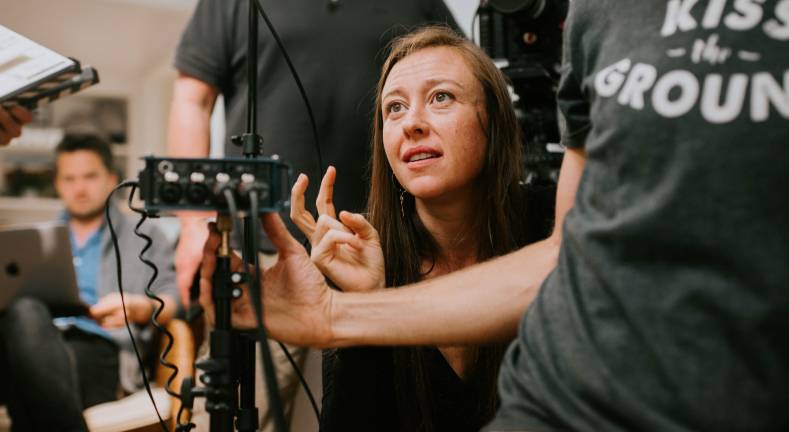 Still from Kiss the Ground.

Narrated by Woody Harrelson, the doc sheds light on a new approach to farming called ‘regenerative agriculture,’ which has the potential to balance our climate, replenish our vast water supplies and feed the world. Filmmakers Josh and Rebecca Tickell have made 14 films on the subject and been involved in climate change activism over the years.

The challenge of the film was to capture, over a number of years, numerous interviews and footage from, while also incorporating various third party footage, animations and visual effects. “We were committed to having a very cinematic experience with the film,” added Josh Tickell. “It’s tough to do on a tight budget and we knew a lot would come down to post and color. Thankfully DaVinci Resolve Studio was instrumental in giving everything the consistency it deserved. In many ways the temp color would have been sufficient if we wanted to deliver a good doc but it was not sufficient for a great documentary.”

Once the film reached a final cut, the massive job of reconforming in DaVinci Resolve Studio began. “Going back to the original master footage was brutal as we had been slowly adjusting the film’s look for seven years. Suddenly, we had to start from scratch. But Resolve gave us very deep control over the movie’s look.”

The Tickells brought in color pipeline specialist Darius Fisher with Digital Neural Axis (DNA) to help manage the project. “Over the years we had many different versions we hoped at the time were close to a final locked rough cut,” said Fisher. “We actually did many mini online sessions along the way, taking shots into Resolve and working on color, so finally when we actually started finishing and coloring a locked cut, we were already in the zone.”

Fisher’s team worked throughout the process, taking clips into DaVinci Resolve Studio for speed changes or frame rate adjustments. The team moved the conform to FotoKem and colorist Phil Beckner, to finish the film.