Guntermann & Drunck is helping facilities migrate to the cloud slowly.

Many facilities considering the move to cloud-based operations must first understand how their existing inventory of equipment will interoperate with virtualized services. This is often referred to as a hybrid system—on cloud and on-premise. However, to do it successfully, there’s got to be some type of gateway bridge that gets your signals from SDI into IP with efficiency and reliability.

That was the thinking among the product design engineers at Guntermann & Drunck GmbH (G&D) when they were looking at improving KVM system operation in today’s increasingly virtualized production environments. The idea was to integrate virtual machines into existing KVM matrix installations. Thus far the company’s KVM systems have traditionally been part of an on-premise installation that was easily manipulated and adjusted as required.

With the launch of RemoteAccess-CPU, G&D is enabling hybrid infrastructures. The company has released a new series of modules that are designed to make the connection between matrix systems and virtual machines easy, which can then be accessed remotely via network protocols like RDP, VNC and SSH. Support of further protocols will follow soon. 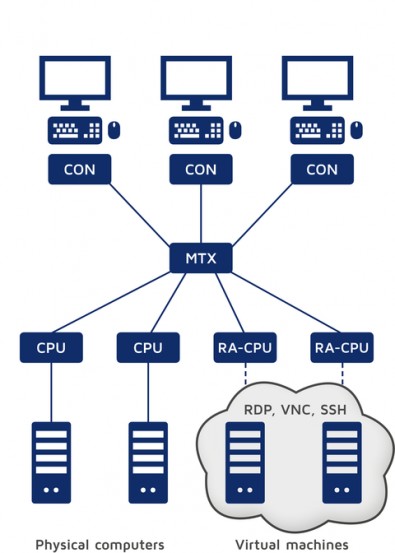 With its Gigabit Ethernet network interface, the RemoteAccess-CPU supports video resolutions up to 2560 x 1600 @ 60 Hz as well as USB HID and embedded audio. Users select the desired source from a standardized menu or “target list” on the device’s integrated LED screen display. This can be done regardless of whether the desired computer is in the server room, via network protocol or in the cloud. Customers can use the RemoteAccess-CPU as a thin client to set up a connection without having to purchase extra hardware.

The KVM matrix controls the logic and takes over user administration. And all connection data is forwarded in encrypted form, so security is assured.

G&D has a history of developing solutions for KVM, whether a user wants to operate several hundred computers from one workstation or extend access to computers to up to 10,000 meters (over fiber). It makes KVM switches, extenders, analog and digital matrix systems, digital signage system and a series of KVM accessories—which are all compatible with the new RemoteAccess-CPU.