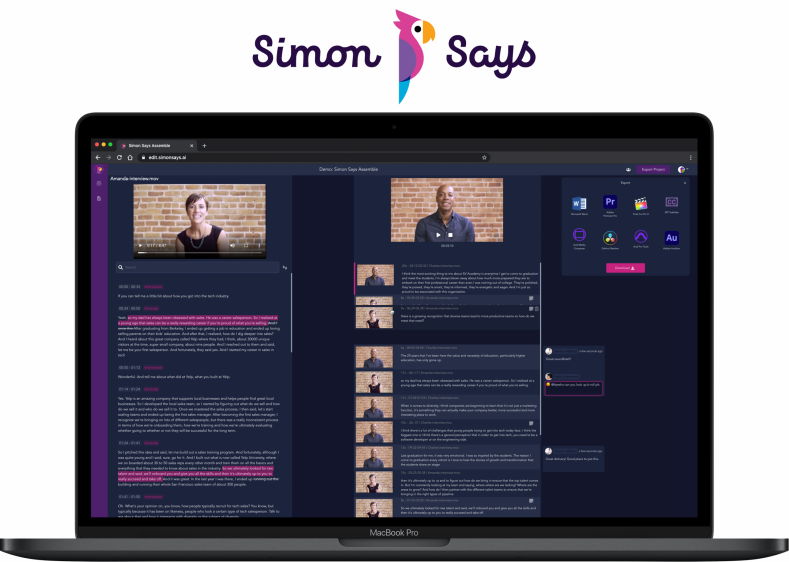 Simon Says, a timecode-based AI transcription platform has launched Assemble, which it says makes video editing as simple as copying and pasting text.

With story locked, the editor can export to their preferred NLE (Premiere Pro, Media Composer, Final Cut Pro, and Resolve) where the XML automatically re-creates the assembled timeline and relinks the media at the correct in and out points.

“Eliminated is the tedium of scrubbing through audio to find a soundbite, flipping between highlights on a transcript, implementing edit notes, and the back-and-forth of endless exports trying to get signoff,” says Shamir Allibhai, founder and CEO. “With Simon Says Assemble, the editor is liberated to do what they do best: focus on shot selections, pacing, music, and all the creative elements that bring a story to life.

“Teams can now edit, discuss, and sign-off on rough cuts from the web as simply as editing text. Transcription was the stepping stone to Simon Says Assemble, which empowers everyone involved in a project to find and order the meaningful parts of the video to create an impactful narrative. Assemble brings down technical and cost barriers and frees the story from the silos of an NLE.”

Damien LeVeck, owner/producer of Skubalon, Inc, is currently using Simon Says for a documentary chronicling the history of skateboarding. He comments, "Simon Says is the perfect AI transcription service, not only because of the quality of transcription and low cost, but also because it offers the widest array of integrations with editing applications. The recent addition of Assemble further streamlines our workflow, allowing our team to send stringouts and radio cuts to editors faster, which enables quicker turnaround on tight deadlines."