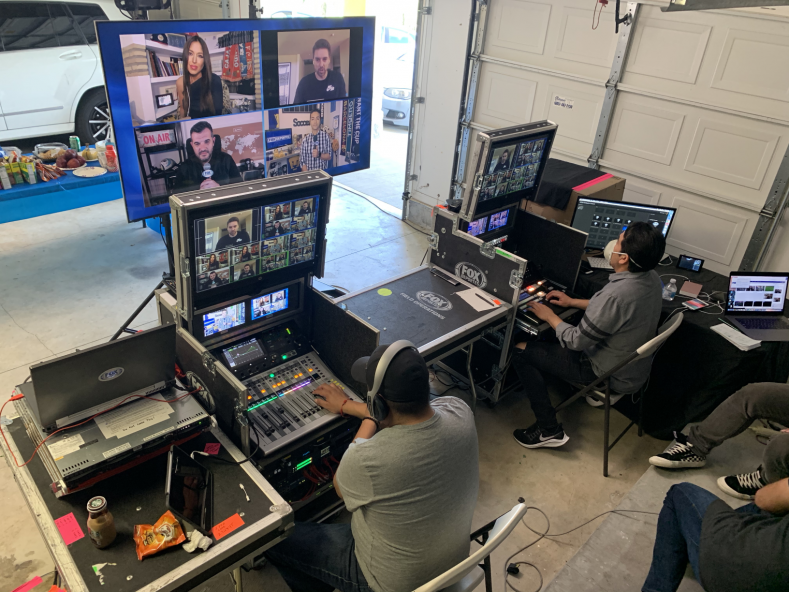 Dejero has been key to US Sports Network FOX Deportes’ ability to keep its station thriving during the ongoing COVID-19 pandemic, which forced the broadcaster to vacate its Los Angeles headquarters and quickly move to a ‘work-from-home’ workflow.

In under a week, FOX Deportes was able to deploy a temporary production control room (PCR) in the garage of its director of operations. They also installed seven mobile broadcasting flypacks at the homes of key on-screen reporters, all centering around Dejero technology for the creation of top quality live video content.

“We were actually ready for the pandemic before we ever knew it would hit!” said Ruben Rocha, director of operations at FOX Deportes. “We didn’t panic — we just applied the same workflows that Dejero already offered us for remote broadcasting to this new ‘reporting-from-home’ scenario. We were fully equipped and way ahead of the game.”

FOX Deportes simply reassigned its remote production flypacks to its presenters and to Rocha’s garage-based PCR to continue the production of live sports coverage from around the world and the creation of original content such as its nightly round-table show, with guests appearing from home via the Dejero LivePlus app.

A long-time user of Dejero technology for remote broadcasting in a variety of countries and terrains, FOX Deportes had been using a combination of Dejero’s EnGo mobile transmitters, FlexPoint transceivers and PathWay encoders in remote production flypacks to support on-site reporting at major sports events around the world, such as the World Series, UEFA Champions League and the Super Bowl.

PathWay allows the collection of eight separate feeds at a stadium — including a primary feed, a backup feed, beauty shot, a press conference feed, a sideline reporter feed and a drone shot — and sends them back individually to Los Angeles to enhance the live coverage of each event. The network had also previously successfully set up a pioneering home studio in Mexico City to support its local anchor that also hinged on Dejero technology.

All this experience meant that the broadcaster was able to quickly set up a new workflow to bypass the LA broadcast center when the pandemic hit. The public internet accessible from Rocha’s garage was used for main connectivity with reliable back-up coming from Dejero’s EnGo mobile transmitter, which uses Smart Blending Technology to intelligently combine multiple network connections in real-time for enhanced reliability, expanded coverage, and greater bandwidth capacity.

”We easily set up a temporary PCR in my garage, to which we connected each of the reporters from their homes as far-afield as Spain, Argentina and Mexico. Evacuation of a broadcast centre and the setup of a temporary PCR sounds like a major operation, but it was very simple as we already knew the workflow,” continued Rocha.

At the heart of each home studio is a Dejero PathWay encoder delivering IFB into the home and aggregating all feeds coming from the home studio to send back to the temporary PCR. Four CuePoint return video servers offer eight channels of video and audio return with extremely low latency — as little as 250 milliseconds — one of which is disclosing what is running live on air for talent-cueing, and one delivering and changing graphics located behind the reporter. The talent uses the Dejero LivePlus app downloaded to their smartphone or tablet for the creation and delivery of broadcast-quality video. At the PCR, three PathWays with four ports could receive, manage and switch 12 live streams simultaneously.

“There is nobody out there with the same quality of home studio that we have. What we do is really cool and unique — everyone asks how we do it! Our live shots look amazing from across the world — and using Dejero as a platform is a very cost effective way to produce an international show with no latency and no extra costs,” concluded Rocha. “We love Dejero’s technology and it’s fantastic technical support — it enables FOX Deportes to produce simple and cost efficient high quality broadcasts from anywhere.”