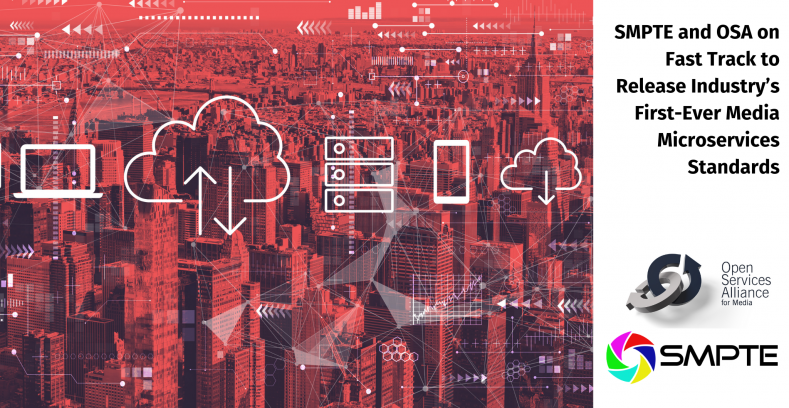 Work began on this API within the OSA about six months ago.

The two organizations have published a new public Committee Draft (public CD) (SMPTE ST 2125) that documents a standardized IMF Registration API and a second public CD (SMPTE ST 2126) that standardizes status reporting and logging for media microservices. Both SMPTE ST 2125 and SMPTE ST 2126 are available for download free of charge to implementers who would like to build initial implementations.

“Work began on this API within the OSA about six months ago. A focused project group agreed on an approach and quickly produced a document to SMPTE, who then continued the rapid pace of getting a draft into the hands of implementers,” said Chris Lennon, OSA founder and executive director and CEO of MediAnswers. “Utilizing SMPTE’s new public Committee Draft (CD) process, the contribution from the OSA underwent a thorough but accelerated review by SMPTE’s Media Microservices Drafting Group, reporting to the 34CS Technology Committee, which is focused on media systems, control, and services. We expect this to be the first of many opportunities for collaboration.”

SMPTE ST 2126 took a similar path from the OSA through SMPTE. The project focused on the fundamental challenge of implementing multivendor, multicloud, microservice-based solutions, which lacked a standardized, common means of reporting back the success (or failure) of their execution. The OSA used input from the IETF and EBU to design a flexible yet standardized framework for status reporting and logging, and contributed the resulting draft to SMPTE, which created the public CD.

Public CDs are open documents that are distributed for review and comment by the professional community for a limited time.

“The balance of rigor and speed of the public CD process to push solutions out to implementers is invigorating,” said Bruce Devlin, SMPTE standards vp. “I understand this to be the core reason the OSA identified SMPTE and our public CD process for bringing uniformity and interoperability to service-oriented software architecture. Our software-minded colleagues tell me that the public CD process fits well with the agile, iterative way they’re accustomed to working.”