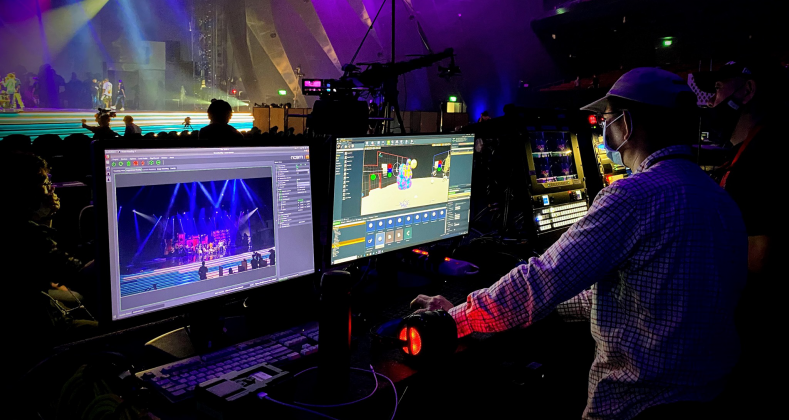 All signals were routed through an AJA KUMO 3232-12G router.

Getop developed a turnkey live AR system for the event comprising a Dell 7920 workstation, an AJA Corvid 88 card for audio and video I/O, Pixotope, and Unreal Engine. An AJA GEN10 HD/SD sync generator enabled signal synchronization, while an AJA HD10CEA was used to generate additional signals for the system. Both were installed in an AJA DRM Mini-Converter rackmount frame for simpler equipment operation on site.

To fuse the AR portion of the production with the live event’s 1080i output, Getop needed a way to convert its AR engine output from 1080p to 1080i for delivery to the GMA crew, and ultimately chose to use an AJA FS-HDR frame synchronizer and HDR/WCG converter.

“Even though this particular production was SDR, we opted for an FS-HDR, as it’s a Swiss-Army knife for live productions like this, where you’re juggling multiple sources. We can easily manage four channels of real-time HD cross-conversion simultaneously, but also have the flexibility to work in HDR if future projects demand it,” shared Paul Chou, CEO, Getop. “It’s also so versatile, in that it supports an expansive range of formats and packs a ton of functionality into a 1RU format.”

All signals were routed through an AJA KUMO 3232-12G router, with an AJA KUMO CP2 Control Panel used for configuration and control. “In live production, routing technology rarely receives the credit it deserves. It sits at the heart of the whole production pipeline, ensuring all of the audio and video sources in different formats are routed to the appropriate destinations,” said Chou. “Given its important role, the reliability, flexibility and quality of the router you choose are vital, especially for such a massive live event like GMA, where there’s no room for error. Our KUMO 3232-12G delivers on this front, and so much more.”

For monitoring and archival, the AR portion of the production was recorded on a Ki Pro Ultra 12G recorder, and precisely monitored with an EIZO CG319X Grade One monitor in SDR REC.709 color. Getop used an Hi5-12G Mini-Converter to convert the SDI signal from the KUMO router to HDMI for the EIZO monitor input.