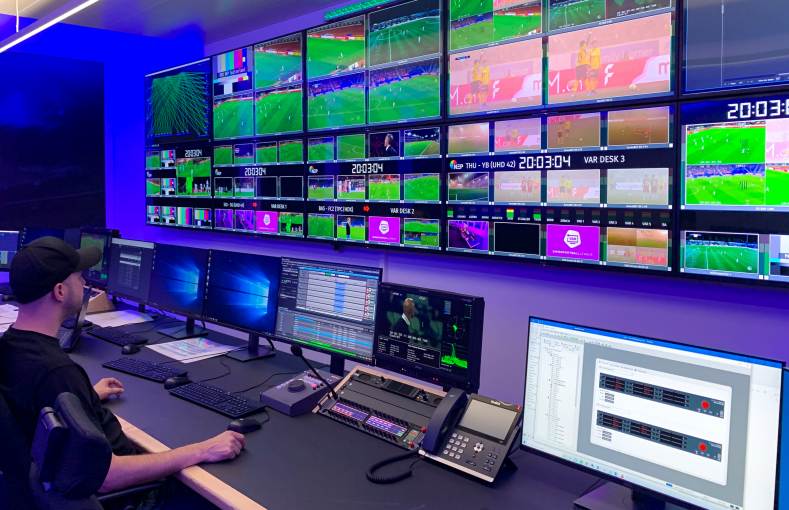 Bolero S is a fail-safe intercom system built around Riedel’s Artist communications infrastructure that provides an individualized, voice-activated, Bolero-based wireless device, with remote support delivered by NEP from SFL’s Technical Operation Center in Hegnau, Switzerland. Bolero S pairs industry-leading intercom technology with custom engineering and hands-on support by Riedel-qualified engineers. The result is clear, reliable, and seamless communications that can be applied in any sport and for any crew members, including officiators and coaches.

Rolled out for the SFL’s 2019/2020 season, the referee communications infrastructure developed by Riedel and NEP was successfully used for all 182 games of the Raiffeisen Super League. The system enabled reliable communications between officials, their assistants on the sidelines, and the SFL’s Video Operation Room in Hegnau. With two Bolero S antennas and seven beltpacks deployed to each of the stadiums of the 10 Raiffeisen Super League teams, a three-member team at the NEP Broadcast Center facility supported referees in the stadium by monitoring multiple television broadcast feeds of live game play. The video operations team then used the Bolero S system to communicate information in real time and with highest-possible audio quality to the match officials to help them make informed decisions on questionable plays.

Dani Wermelinger, Head of Elite Referee Department, SFV, commented, “After a detailed analysis of all 182 matches, we can state that the VAR presented a clear and obvious error in 36 cases. Without the support from the video operators in Hegnau, these situations would have been wrongly assessed and in the worst case would have led to a different result. This clearly demonstrates that the VAR has made football in Switzerland fairer and more just.”

“We’re very proud of the VAR system, which is by far the most important technology innovation in modern Swiss football. The VAR project was extremely complex, with a wide range of technology, training, and process elements that had to be interlinked, and our partnership with Riedel was one key to the success of this project,” said Reto Häuselmann, VAR Project Manager, Swiss Football League. “A stable, reliable communications link with outstanding voice quality was also critical, and looking at the positive feedback we’ve gotten from our referees, Bolero S seems to have delivered on its promise.”