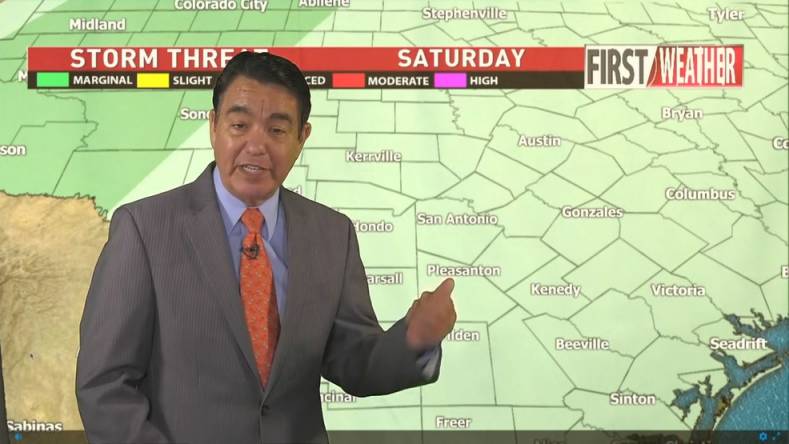 For Alex Garcia, Chief Meteorologist at San Antonio, Texas-based Fox affiliate KABB, however, the disruption was short lived. After more than 25 years of working with broadcast engineers in radio and television, Garcia has learned to configure and wire build a video production and distribution system, even if it is located in his living room.

So far, there have been none of the technical problems that continues to plague some stations.

“My only challenge is when my neighbor decides to cut his grass during one of my broadcasts,” he said. “I don’t have a soundproof living room.”

While he’s been producing three segments during the station’s 9:00 PM newscast in his home since March, the station recently allowed Garcia to return to the studio for his weather reporting. But he’s still doing a lot of programming for other projects at home. In addition to his role at KABB, Garcia also hosts Hurricane Center LIVE, an online weekly series helps meteorologists and emergency teams prepare for hurricane season. 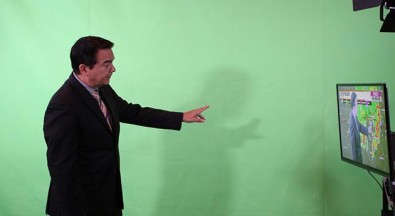 Garcia performs all of his green screen compositing with the Blackmagic Atem switcher and its chromakey option.

He also produces science events for kids at different venues—like Science Museums and malls—and is Director at the National Tropical Weather Conference, which holds a convention each year that attracts all of the broadcast meteorologists from around the country as well as executives from the National Hurricane Center. (He’s also CEO of the Storm Science Network.) This year it went virtual but Garcia still used his home set up, turning it into a weekly series of programs that are delivered over a 1 Gbps Internet connection. He said he can attract over 25K viewers from 61 countries on a single show in the middle of the day on a Wednesday. His living room setup has that kind of reach.

In past physical conferences, Garcia used the ATEM Television Studio HD to switch what was being shown on screen, but this year, since they’re bringing everyone in virtually via Skype, Zoom or Google Meet, he uses the ATEM 4 M/E switcher. Each participant comes in as a separate input into the ATEM 4 M/E Broadcast Studio 4K and since he has 4 M/Es to work with, he can build them into the switcher’s SuperSource mode, taking advantage of its picture-in-picture function.

“I also do a lot of other things besides TV, so I’ve got a lot equipment,” Garcia said. “That’s saying more than a lot of meteorologists in this business can say. I’ve seen a lot of people using a monitor and just reporting from the side of it. That’s low-grade TV, if you ask me, and I think as an industry we can do better for our viewers.”

He also said that lighting at home is tricky if you don’t know what three-point illumination is and or lighting for a chromakey.

“Most news anchors don’t know how to do lighting,” he said. “I’ve learned it by trial and error after years of doing it myself.” 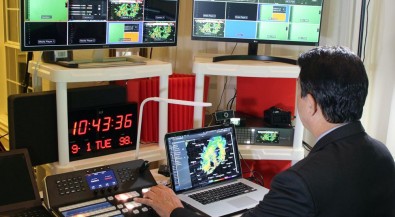 From his living room control room, Garcia produces a large amount of live and pre-recorded content for TV and online streaming.

For his TV segments and other projects, Garcia has installed a Blackmagic Design 4 M/E Atem 4K switcher, an outboard audio mixer, three Panasonic HD cameras, a portable Neewer lighting kit, and a Blackmagic HyperDeck Studio Mini for playback. He is connected to the stations viz the public Internet as well as with a LiveU cellular video transmitter. He can now do picture in picture on screen and bring in virtual guests live, as if he had a full control room.

His weather segments are produced in 1080 HD resolution against a greenscreen, with the chromakey effect processed within the Atem switcher. He’s also got a Blackmagic Web Presenter—which makes any SDI or HDMI video source appear as a USB webcam for higher quality web streaming—and HDMI to SDI Micro Converters for his green screen, several computers, and microphones.

During the total lockdown, Garcia communicated with the station remotely to prepare talking points and weather graphics for his 9:00 newscast segments. When the show began, Garcia ran a big part of the production by himself, live streaming his forecasts in real time to a minimal crew at the station to broadcast live. 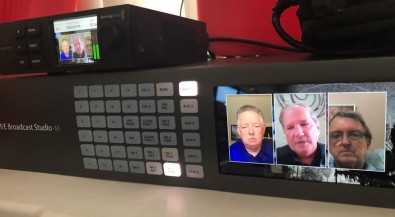 A Blackmagic Hyperdeck Mini handles playback in the living room during remote broadcasts.

“Since I’m sending a completely prepared show to the station with the graphics already embedded in my feed, all they have to do is put me on air,” said Garcia.

During a newscast, Garcia can’t use the ATEM 4 M/E Broadcast Studio 4K panel and switch live because he’s on camera, so he instead uses a ATEM 1 M/E panel, which he has sitting right next to him, to switch feeds, dissolve and preview. At the same time, the output of the show is going to the Blackmagic Web Presenter and through to the station for a simultaneous live stream to its social media channels.

“I set up a greenscreen and use the ATEM 4 M/E Broadcast Studio 4K to create a chromakey,” he said. “I worked with one of our stations engineers to route the signal through the ATEM switcher and then back to the station via a LiveU bonded cellular transmitter. Viewers cannot tell the difference.”

For Garcia, working from home is like being at the station, since his home computer is directly connected to the weather computers at the station. The output of the station’s computers is sent through a private stream, which is then converted using a Blackmagic Micro Converter HDMI to SDI and sent into the ATEM 4 M/E Broadcast Studio 4K for keying. This allows him to see what is being shown behind me on a monitor I’ve set up in his living room.

“I have everything I need and can broadcast from here,” said Garcia, adding that his only fear is losing his Internet connection during a storm. “Why would I need to go anywhere else? The station is cold. I’d rather not be freezing to death, I’m comfortable here. I can do anything I need to do from my house.

“As for broadcasting from home, we are looking at the future, today,” he said. “We are learning lessons every day that will be useful going forward. Broadcast facilities, if they are smart, they don’t need to have these big studio buildings anymore. They just need one small space if you want to bring a guest or do a live segment that requires it. All of our news crews are now working from home and producing some really fantastic news coverage. I think working separately outside the studio has been a real eye opener for a lot of people who say this is how news should be done.

“And KABB is still kicking some butt in the ratings,” he said.