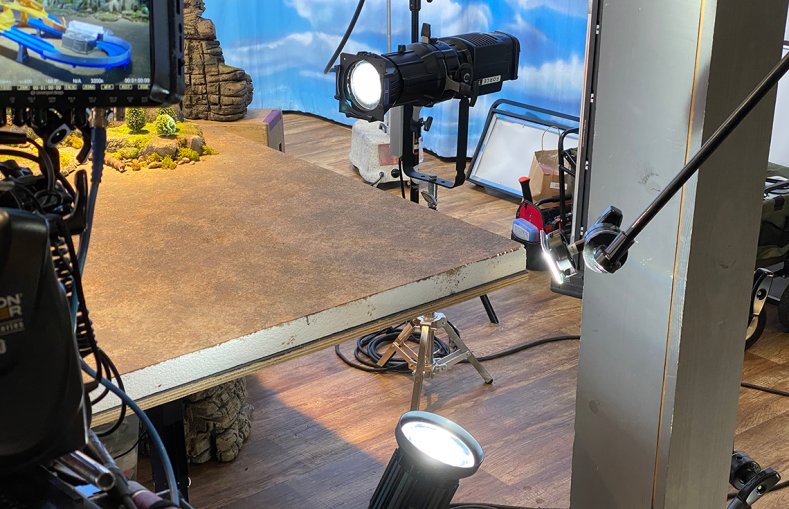 Tristan Whitman a specialist in tabletop cinematography, explains how he shot a campaign for Mattel’s Hot Wheels.

Whitman’s goal for the Moustache Productions and The Good Kind of Crazy Ad agency was to make the cars look “big and in your face,” while still keeping viewers aware that the stars of the show are indeed small toys.

He says, “We often go right next to the car and shoot wide so the car looks bigger which creates a whole set of technicalities.”

Much of the work is shot with high-speed cameras like the Phantom he used for this campaign, and attention to the details is vital. “For miniatures you have to highlight things like the bumper or the grill and yet hold the blacks of the tires while reading what’s written on the wheels. It’s about putting a light where needed in dark areas so you can pop little pieces of the car.

He used a BB&S hand-size Compact Beamlight (CBL) along with Lightbridge CRLS C-Reflectors. Although CRLS ranges in sizes up to 100x100cm, for his miniature set Tristan chose a 7x7cm C-Reflector in Diffusion 4 Superwhite and matched it with a daylight CBL.

He shot with a Phantom and RED Dragon mainly equipped with a probe-style lens. “I needed a small and compact fixture that output a hard edge while shooting 1000fps. No other LEDs are as hard and punchy. The tiniest CBL let me eliminate dark shadows we often have to deal with on the tracks. Shooting from 120 to 190 fps, they were the only source that really dug into dark shoots and deep tracks. And there was no flicker.”

Another tool he made use of was the Pipeline Reporter kit. They fit the linear Pipeline right under the probe-style lens and it was ready when they needed to add accents and precise fill lights on the small cars. “We shined it on the bumper of a mini car, so you could see the small details on the front.”

To get an edge light throughout, Whitman tried the BB&S Force 7 LED LEKO and he was pleasantly surprised. “When the Force 7 projects it is clean. With other LEKOs you can see the colors of light mixing as they leave the lens, but this one is pure daylight. And it is nice and hard. Yet, after a full day I touched the back of the Force 7 and it wasn’t hot at all.”

It’s perhaps a little unfair to blame modern visual effects people for the fact that audiences are becoming a little jaded about green screen. If we’re to conclude that there’s some sort of quality problem with VFX, we’d …