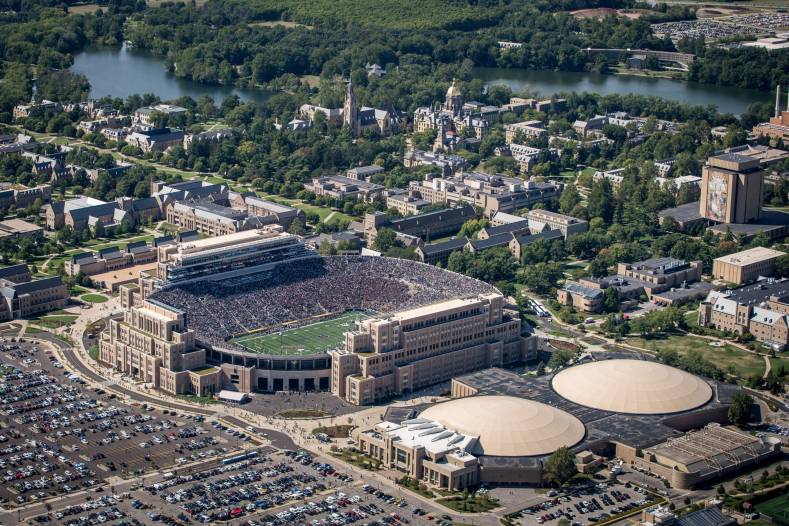 This article was first published as part of Essential Guide: Audio Over IP - Making It Work

After years of standards development, the IP revolution is well underway now for media enterprises of all sizes and types. Spurred by ratification of SMTPE ST-2110 and AES67, many broadcast operations have started the hard work of turning the promise of IP into reality. Many, like the University of Notre Dame in South Bend, Indiana, are taking advantage of greenfield projects to “do it right from the first” - with all of the promises and pitfalls of being on the bleeding edge of a major technology movement.

The Campus Crossroads Project is the most ambitious building campaign in Notre Dame’s storied, 175-year history. Although anchored to the university’s iconic Notre Dame Stadium, the project is designed to create a year-round center of student activity and support a broad range of academic and faith-based programs in addition to athletics.

“We realized that, over time, the university has grown in such a way that Notre Dame Stadium has become the exact geographical center of the campus. It doesn’t make sense for such a central facility to be used only seven times a year,” said Jack Swarbrick, Vice President and James E. Rohr Director of Athletics at the University of Notre Dame. “The intent of Campus Crossroads is to bring year-round, everyday vitality to the stadium and make it a great resource for every aspect of the university.”

The technology centerpiece of the project is the brand-new, 18,000-square-foot Rex and Alice A. Martin Media Center, home of Notre Dame Studios. In addition to supporting Fighting Irish Media, the video production and storytelling arm of the Notre Dame athletics department, Notre Dame Studios serves a wide-ranging group of campus customers including public affairs and communications, university relations, student affairs, and many more. Output ranges from digital content in support of academics and faith-based initiatives to production of videoboard shows in Notre Dame Stadium, Purcell Pavilion, and Compton Family Ice Arena.

“We set out to create a state-of-the-art facility to meet our needs not just for today, but for years to come. It was important to pick best-of-breed technology that would allow us to change direction as needed, and also to keep up with the speed of technology advancement,” noted Dan Skendzel, Executive Director, Notre Dame Studios. “IP was the obvious approach for meeting these requirements.”

Notre Dame Studios turned to BeckTV for systems integration and design consulting on the IP infrastructure. Scott Rinehart, the university’s Director of Broadcast Technology, commented, “We had plenty of open and honest conversations with BeckTV about whether to play it safe with baseband or take a chance on whether IP video has reached enough of a tipping point to invest in it for the future. A big deciding factor was the leading-edge technology vendors like Riedel. IP is where they’re spending their R&D dollars now, so it makes sense to take advantage of their next-generation products.”

He added, “The more we got into it, the more we realized that IP would be the right fit for the long-term goals we want this project to meet. Its expandability and flexibility will allow us to get maximum use out of our facilities throughout the year. For instance, we can use a studio for an academic event in the morning and then quickly turn it around for a sports event in the evening. IP also offers a foundation for us to bring more advanced technologies into the classroom, such as virtual and augmented reality.”

At the core of Notre Dame’s new IP-based communications infrastructure is Riedel’s Artist digital matrix intercom system and SmartPanel app-driven user interfaces. Intercom systems offer a great use case for demonstrating professional broadcast IP implementations, since modern solutions like Artist support AoIP through industry-standard interfaces including AES67, Dante, AVB, and Ravenna. Building a future-proof intercom foundation is as simple as installing an appropriate interface card into the intercom matrix frame and then connecting to end devices via CAT5 or fiber using an IP switch.

“Riedel is all about embracing standards, and our Artist Digital matrix Intercom ecosystem has supported AVB and AES67 for years. Combined with AES67 client cards in the Artist matrix, our SmartPanels are the only SMPTE 2110-30-compliant intercom panel solutions on the market,” said Joyce Bente, President at Riedel North America. “The panels are full-bandwidth, compared to competing IP panels with just 7KHz of audio bandwidth and higher latencies over LANs. That means you could conceivably layer your intercom atop your existing IP infrastructure to save cabling and lower costs.”

Lessons from the IP Trenches

As with any major technology shift, Notre Dame Studios’ IP adoption hasn’t been a completely smooth ride. However, with IP-optimized solutions from Evertz, Telos Alliance, and Riedel in use, Notre Dame Studios is well on its way towards a stable and turnkey IP operation.

“There have been plenty of pain points along the way, mostly about having to ‘unlearn’ what we know about baseband signal distribution. The learning curve on this is steep, and we have a long way to go before we fly solo,” Rinehart noted. “At this stage, nobody fully understands all of the ins and outs of a ground-up IP facility, but the BeckTV and Riedel teams have been great resources as we’ve talked things out and come to decisions.”

One persistent issue, in which the routers were not passing timing information correctly, offered a particularly valuable lesson for the engineering and IT teams and emphasized the necessity of close cooperation between both. Over the course of several months, the IT department agreed to a solution in which PTP data would be delivered first, media data second, and all other data third, but this still didn’t eliminate excessive jitter/offset on the PTP clock across all switches. It was only after Notre Dame Studios upgraded their Cisco switches that PTP came within spec and these timing problems disappeared.

“The big lesson here is that the industry is a long way from plug-and-play gear for IP networks. We also learned the importance of getting engineering staff up to speed on the knowledge sets they’ll need for the new IP paradigm, as well as making sure the IT team truly understands our objectives,” Rinehart said. “I will say that the support we’ve gotten from Riedel has been fantastic. We struggled with the router timing issue for a while, but we were finally able to get it resolved through the combined efforts of Riedel, Cisco, and our networking team.”

The challenge of managing and maintaining IP networks will require a whole new set of skills for technicians and new levels of cooperation between technicians and their IT departments. IT networks are collaborative in nature, so it will be up to all parts of the broadcast world – manufacturers, operators, engineers, and IT professionals – to work together on delivering the best results for technical infrastructures. But, as the Notre Dame Studios can attest, the rewards are worth the effort.

Rinehart observed, “We’re not the tip of the spear, but we are awfully close. At the moment, building an IP facility from the ground up is by its nature highly complex, so we’ve gone through plenty of challenges – but things are smoothing out and we’re confident this facility will carry us for many years without a major ‘forklift’ upgrade. It’s an exciting future.”

In a recent article in a sports tech journal, he took a more philosophical view. “There’s a quote sitting right outside my door that I look at every day, all day, and it says one of Notre Dame’s greatest assets has been the boldness of its vision, the ability to see possibilities and connections where others saw only obstacles and fragmentation. I look at that, and it hits me every day that this place is willing to accept calculated risk. It’s what we do; it’s in the DNA of the university system to do that. And, luckily, we had essentially a greenfield possibility here to do that.”