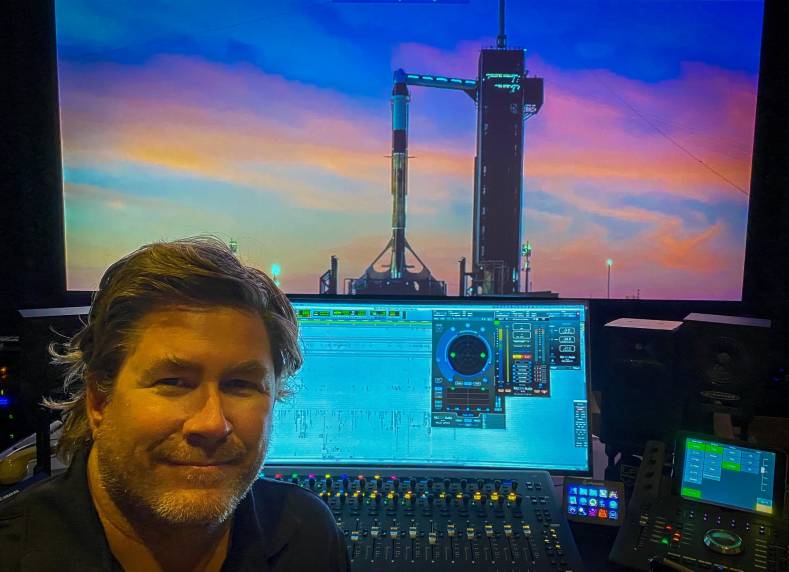 Discovery Network’s “Journey to the Future”, produced by Storied Media, is a documentary focused on the behind-the-scenes lead-up to America’s historic SpaceX Falcon 9 launch. Several packages were also produced for use throughout the live broadcasts. Among the professionals who worked on these projects was Re-Recording Mixer Michael Phillips Keeley, CAS, who used Nugen Audio products extensively to help create the perfect soundscape.

Included among the many Nugen Audio plug-ins that Keeley uses are Halo Downmix and Halo Upmix, which he says played a vital role in mixing the project. “Even though the documentary aired in stereo, I mixed the entire project immersively in Atmos, so Halo Upmix and Downmix were both essential,” he explains. “I used Halo Upmix to turn the stereo tracks into Atmos-caliber audio and later used Downmix for the final deliverables. I feel that I get better mixes with that workflow – mixing it immersively and then downmixing it to stereo.”

In addition to the documentary portion, Keeley also sound designed and mixed the behind-the-scenes packages that aired throughout the live broadcasts. “We were given all the production elements one week before the initial launch date,” he adds. “Having worked on live, episodic and reality TV projects for 20 years, I’m used to being one of the last in the signal chain and working within very tight turnaround schedules. As with every television production, Nugen’s plug-ins afford me the ability to produce high-quality projects in short time spans, which has proven invaluable.”

Working from his home-based studio, Sound Striker Post, due to California’s “Safer at Home” orders, Keeley was able to collaborate remotely with his editors and sound design team, as well as the client. “With ‘Journey,’ I did a live mix review through Source Connect Live, which allowed me to send the audio signal directly to the client’s TVs without any degradation of the audio,” he says. “They could hear ahead of time exactly what it was going to sound like when it aired.”

“The Discovery project was an awesome experience,” continues Keeley. “There’s a great feeling of magic that comes from combining picture with sound into a final production, especially now with immersive audio. When I was working on the shuttle sequences in the documentary, it brought back memories of watching shuttle launches during my childhood. I loved being able to share that with the world.”

With Florida’s unpredictable weather causing a last-minute postponement of the Falcon 9 launch, Journey to the Future aired more frequently than originally planned. “The delay turned out to be a great promotion for the event,” explains Keeley. “With the new date set for a Saturday, and everyone home under social distancing orders, the launch ended up being Discovery's highest rated daytime broadcast, ever.”

In addition to the Journey to the Future project, Keeley has also been working with Media City Sound this past year on a new immersive show for Griffith Observatory’s Samuel Oschin Planetarium called Signs of Life. Set to be released in 2021, the project recently won the FullDome Award for Best Feature Film at the 14th Jena FullDome Festival.

“We did all the pre-mixing here in my Dolby Atmos room, which is set up in 9.1.4,” he explains. “The Samuel Oschin Planetarium has a 28.1 speaker set up, so we utilized Nugen Halo to upmix the stereo music, ambiences and sound effects. Halo was a huge help in immersifying these stereo elements.”

Keeley also recently worked on the trailer music with Tool drummer Danny Carey, which he produced in a similar fashion to the SpaceX project.

“I mixed the tracks utilizing Halo to upmix the instruments, then created a stereo binaural downmix,” said Keeley. “This provides more depth and surround in the headphones, which gives listeners a more immersive experience. For any of my projects, I like to utilize the Halo Upmix for spreading out the music and ambiences and the LM-Correct ‘Analyze’ feature to inspect the stems. Being able to take a stereo mix and make it immersive, while also having the control in the plug-in to mute certain speakers, has been a great feature. I believe immersive audio is the future of sound, and it is great to have tools like Nugen to help elevate this platform.”