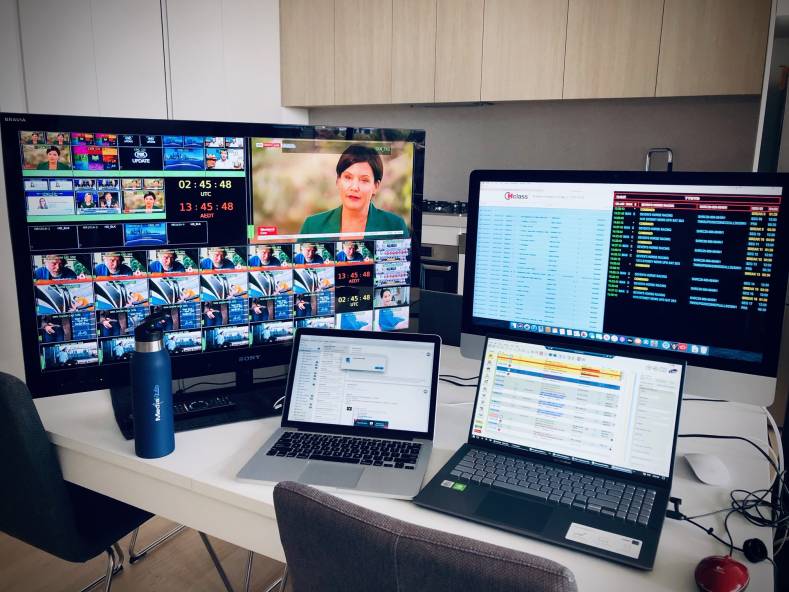 MediaHub Australia transitioned to a work from home scenario during lockdown with assistance of Magna Systems, Grass Valley, Akamai and RTS.

Head of broadcast operations, Scott Jolly explained, “As part of the mitigation of COVID-19 impacting MediaHub operations, the MediaHub Senior Management Team made the decision early to move to remote working wherever possible. The consequence of a COVID-19 outbreak within the facility would have been very serious for all concerned. MediaHub, as an essential service business, is responsible for providing critical news programming from the prime minister, federal and state government officials as well as the chief medical officer across both metro and regional television and radio services both nationally and internationally for our clients, so we simply could not allow this to happen.”

Jolly continued, “It was essential for frontline operations staff to have a remote working solution as closely aligned to being at MediaHub. This meant investing in additional devices including laptops, Chromecasts, tablets and monitors for each of the team, allowing each operator to recreate their workspace at home in a familiar set up.”

Many of MediaHub’s platforms are cloud based enabling them to move ingest, playout, network operations centre (NOC), IT and engineering support teams to remote operations quickly.

MediaHub head of technology, Simon Scott added, “We collaborated with a number of vendor partners such as Magna Systems, Grass Valley, Akamai and RTS to set up our users with a fully-functioning WFH solution. This included GV for remote control platform software, Akamai for CDN and security services and RTS VLink Virtual Comms to extend our talkback system over the internet. This integrated solution meant that not only had we achieved a level of sophistication that enabled our staff to completely operate the system from home, but there were significant savings in terms of operations space and equipment as we didn’t need to build a remote Disaster Recovery suite.”

MediaHub also provided low latency live streams of their monitoring multi-viewer outputs delivered using Akamai CDN and via standard streaming players to their users in their homes. This meant the MediaHub team could now see their monitoring screens on their standard home TV – a major part of the WFH solution.

One of the early challenges MediaHub did face however, was how to deliver a full featured ‘at home’ experience for their operations team when clearly they had no control over their team members’ ISP at home and no choice in their users’ connectivity which varied between 4G, 5G, FTTN, FTTP and HFC. All of which in turn affected the home user’s ISP network congestion during their most active periods.

Scott added, “Operators on shift changeover, or in certain scenarios for live sports or news programming have overlapping access to live video feeds and systems, meaning more than one operator may require access to the same multi-viewer generated screen. So we made a call early into the process to adopt a live OTT approach to the WFH solution. We partnered with Akamai to deliver this consistent delivery to our users across their CDN platform regardless of their ISP access. This allowed ease of access to the streams by any of the devices our staff were using and flexibility to scale out the number of people monitoring the streams.”

Security was a key issue within the MediaHub WFH solution and one they solved by again partnering with Akamai to provide distributed and encrypted remote access service to their systems. This allowed staff to access MediaHub’s platforms’ remote control surfaces via any internet connected device with the Akamai service also providing additional levels of security and monitoring far beyond a traditional VPN solution.

According to MediaHub CEO Alan Sweeney, the key to the success of their unique WFH solution was the total buy-in from the entire MediaHub team.

Sweeney said, “As a result of our teams’ efforts and the WFH solution we have implemented, I’m delighted to say that our client base were not only very impressed we got on the front foot early and planned accordingly to protect their outputs, but also that their services have not been disrupted in any way and it has been 100% business as usual from their point of view.”