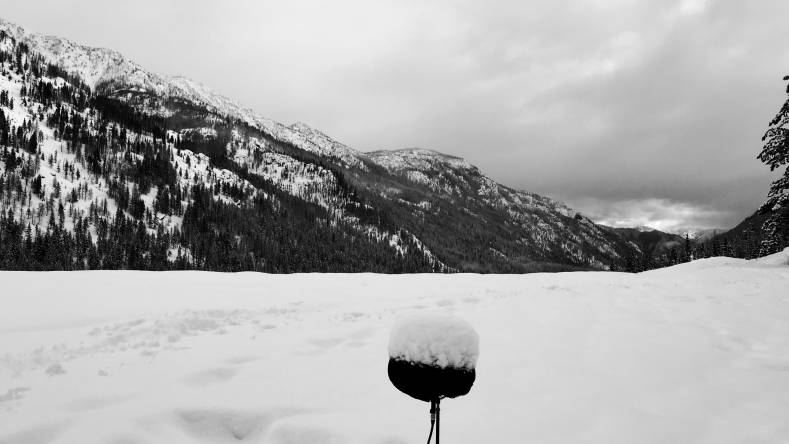 In the midst of a challenging global pandemic, field recordist Thomas Rex Beverly finds solace in his work and says that nature is flourishing as human populations temporarily retreat. Last February, he ventured out to Washington state’s Eastern Cascades – a remote region surrounded by rugged mountains and lush forests.

During the trip, which lasted three weeks, Beverly utilized Sennheiser microphone array to capture an extensive body of soundscapes including avalanches, whispering ponderosa pines, canopy winds from the Cascade mountain range and many other audio sensory experiences.

Beverly, whose sound libraries have been used extensively in the world of film and television – including on high-profile programs such as “Star Trek: Picard” and “Frozen II” – had originally intended to pursue a career writing orchestral, choral and ensemble works. He became enamored with field recording after reading “The Great Animal Orchestra” by Bernie Krause, a book which delves into natural soundscapes – or “the music of the wild” – while expressing the need for conservation and preservation. 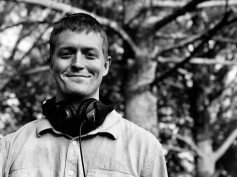 Thomas Rex Beverly’s sound libraries have been used extensively in the world of film and television.

“The Sennheiser mics were recommended by a lot of field recordists, since they have a reputation of doing really well in high humidity and extreme temperature environments,” Beverly states. “When I have to leave a mic out in the woods for two weeks, it’s really important for me to have microphones that have the ability to handle temperature fluctuations and high humidity.” Beverly’s current set-up is a double mid-side configuration consisting of two Sennheiser MKH 8040s and an MKH30, running into a Sound Devices MixPre-3 II or MixPre 6.

“My rig has developed over the years,” he continues. “I started with a mid-side rig with an MKH 50 and MKH 30. Then I got two MKH 8040s and I started recording in surround using the double mid-side configuration because I love the flexibility. I can record spot effects for sound design or surround ambiences all in one blimp.” With a nimble and effective three-mic set-up, Beverly has the ultimate flexibility – not to mention, a lighter carry when embarking on an adventure deep into the wild. “In general, I am always trying to record more sounds with one set of mics, versus bringing all kinds of mics and recording different perspectives.”

Venturing into a vast expanse of wilderness requires focus: “On this trip to the Cascades, I was looking for lots of quiet winter ambiences and wind sounds. Because if a sound designer wants wind sounds, they don’t want sounds with birds and insects in them – they just want wind,” Beverly explains. “So you’ve got to record wind sounds in the winter. It can be quite challenging to get out in the middle of nowhere where there is no noise pollution while also establishing a home base to charge batteries and stay warm.”

For his trip to the Cascades, some of the sounds he was looking to fill in his sound library included coniferous wind in forests that had recently burned by wildfire. “The pitch of the wind varies depending on the length of the foliage,” he explains. “For instance, if you get a forest of really short needled coniferous trees – like spruce or Douglas fir – it will have a higher pitch than a ponderosa pine, which has 6” needles and emanates a much deeper, soothing wind. Meanwhile, a deciduous wind, like the aspen, will have a bit more of a hiss to it.”

Needless to say, a nearly boundless ambition to record also comes with its risks – these risks can include weather, terrain and of course large animals. “I evaluate these risk factors and make my decisions before I go out,” says Beverly. “In most cases, I can mitigate risks by talking to a local park ranger. For example, if you are going someplace very remote, or if you are looking to record an avalanche, you want someone with you for safety reasons.” Beverly managed to record 15 avalanches during his trip to the Cascades.

In some cases, he is able to capture detailed recordings by leaving ‘drop rigs’ in the woods, because it is often not safe to remain in a single place for too long or because the daylight hours can be short. “Ideally, I love to sit and listen – but in some locations, a grizzly could sneak up on you and that could be dangerous. It just depends on the terrain and the environment.”

When he is not able to be present during the recording, Beverly depends on his Sennheiser mics to perform without fail. “I can leave my main Sennheiser mics inside a waterproofed Cinela Pianissimo blimp in the woods and if I need it to, it will record for two weeks, non-stop – in extreme temperatures, rain, or falling snow. I simply have to go out to the location and change batteries in the recorder every 18 hours or so.” Leaving his drop rigs has garnered him some intimate recordings of wildlife. “Once I was able to record water birds flying very close to the mics, and another time a moose came right up to my microphone blimp and began licking and biting it. I managed to get some amazing sounds from that.”

All of his live monitoring in the field has been done with Sennheiser HD 280 Pro headphones. “I have a few pairs of these, and they are great because they have quite a bit of natural isolation and they are super durable. Plus they just sound great.”

“Wildlife is making its way back into places it once retreated from,” concludes Beverly. “There is so much less noise pollution and traffic, and this makes it easier for humans to pay more attention to nature – because it is all around us.” Beverly also says that in light of these challenging times, he’s experienced an increased interest in his collection of nature recordings—which is both meditative and soothing for listeners.

Through his experiences in field recording, Beverly is not only pursuing his passion, but uncovering layers of sounds that are all connected in a sonically coherent ecosystem: “I am trying to capture a field recording that has an emotional state to it,” Beverly concludes. “It is so much more engaging if you can understand the story about the sound instead of just the sound. It makes reconnecting with nature that much easier.”