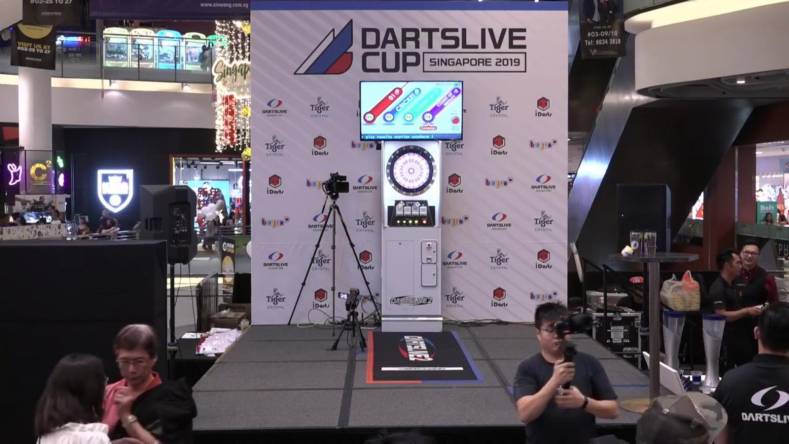 DARTSLIVE is described as a network connected electronic soft dart machine with tournaments and leagues around the machines happening year round. The 9Darts.HK platform provides up to date league information, development of dart related activities and streams live events to their global audience over a number of different online channels.

Recently 9Darts.HK covered the DARTSLIVE Singapore Step Ladder Grand Final. The matches were streamed live from Singapore’s popular Bugis+ shopping center using a four camera set up, with the ATEM 2 M/E Production Studio 4K as their main video switcher for the live stream. Blackmagic Design ATEM Television Studio HD was used for switching information used on various laptops by talent and athletes and for showing charts and scores on screens at the venue.

“It is uniquely challenging to broadcast and stream darts tournaments because of the ever changing sizes of the venues and up close action needed. Viewers expect a lot of information as well as up close shots of the darters, but we can never get in the way of the action,” said Alan Ip, director and founder of 9Darts.HK. “The ATEM switchers let us be as creative as we need to be, and are small and mobile enough that we know we can set up anywhere, whether we are in a shopping mall or a small gaming room.”

For the Singapore matches, they streamed using a three split screen set up that included a main shot of the darter, the dart board and various graphics. In particular, 9Darts.HK used the ATEM Supersource feature, which allows up to four picture in picture DVEs and four keyers that can be assigned to any ATEM video input.

“We use the ATEM 2 M/E’s Supersource feature constantly for all of the different picture in picture shots during a stream,” Ip continued. “A good example is the bottom left picture in picture that is a scoring graphic and that we need triggered after every throw. We grabbed a VGA source straight from the actual dart machine and fed it into the ATEM 2 M/E and used it with the Supersource, which let us automate the whole process and could recall the action in an instant.”

The Singapore match took place on the second level of the Bugis+ shopping mall in Singapore during regular mall hours, so the production had to minimize its impact on both the athletes and the mall’s other customers.