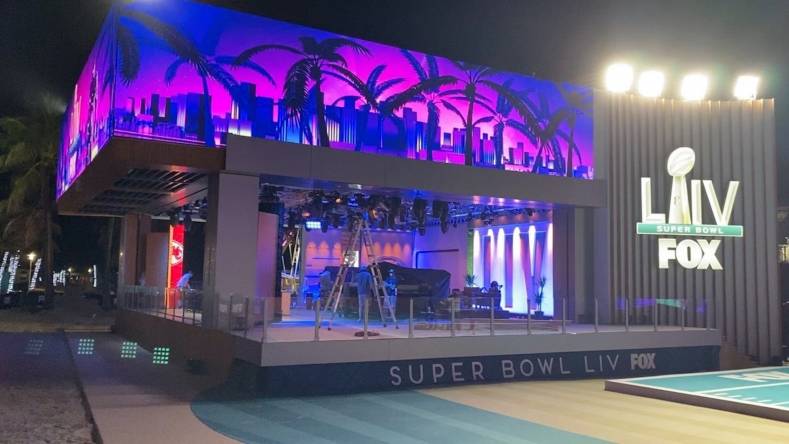 Creative Works London helped devise and install the studios’ set content package. Dan Potter, co-founder explains that all of the creative work we were tasked with for Super Bowl LIV was done in the London studio. "One of the first things we did was to set up a disguise Show File that we could use as an evolving 'proof-of-concept’ tool to test our ideas. Once the main ideas were nailed down and agreed upon, we moved to a disguise workflow that allowed us very early on to share technical files with the state-side production team to test different approaches as they unfolded out of the process.

“From the start we knew that it was going to be a challenge mapping our story-driven showpiece content across six screens with a combined pixel count of over 16K, but once we nailed the narrative, we quickly moved to animatics. We had the advantage of having worked on the main asset, Cleatus the Fox Robot – the network’s NFL brand ambassador – prior to the project’s kick-off. As we progressed through the project, we used disguise to pre-vis high-quality animatics as well as show how the storytelling would unfold across the program segments that Fox Sports carved out for us.

“As the project developed, we were able to consistently share pre-vis renders using ‘work-in-progress' screen dimensions with the client so they were aligned with what we were developing as it emerged. This ability to preview the work in context massively reduced friction in the progressing through communicating and signing off on ideas."