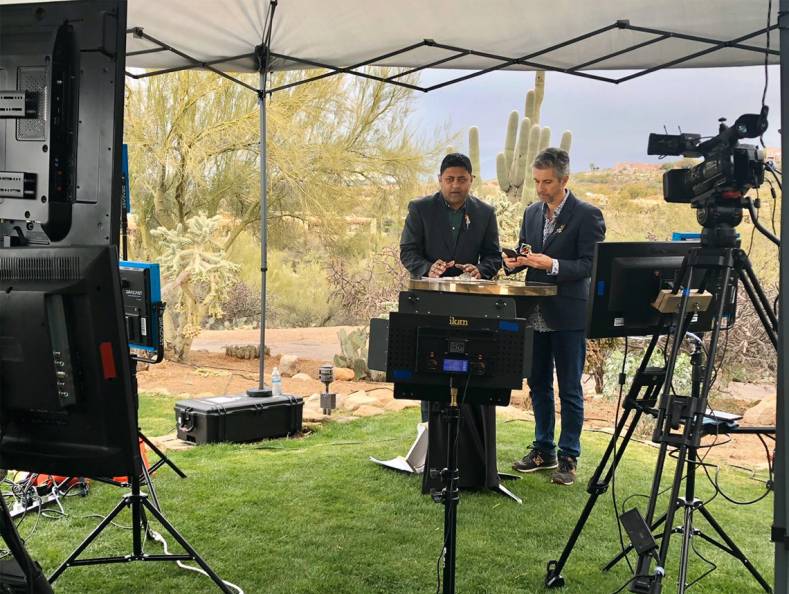 Dejero has provided British teleshopping channel The Jewellery Channel (TJC) with EnGo mobile transmitters, a WayPoint receiver, a CuePoint return feed server and complimentary LivePlus mobile apps, that have formed a key part of the broadcaster's business continuity plan during the pandemic. TJC is using this Dejero gear to lead a significant change in how live teleshopping is produced and broadcast.

"While we intend to continue broadcasting from our main studio in Surrey house, London, for as long as possible, we are all dependent on government policy during this extraordinary time and TJC wanted to be ready to broadcast from home if this was required," said Martin Willingham, technical director at TJC. "Dejero's technology has been a great comfort blanket for us in that scenario. As one of the main TV shopping channels in the UK, we broadcast 24/7, 365 days a year and our reputation depends on us not having technical problems. The reliability and sturdiness of the Dejero workflow has really impressed us."

TJC, a subsidiary of Indian jewellery conglomerate VGL Group, has set up a backup studio in a second location in Southall, in case the main location cannot be accessed. And if a total lockdown were required, the team could work from home using the Dejero LivePlus app, EnGo transmitters, WayPoint receiver and CuePoint return server to create and stream top quality content to viewers. A recent live test of the 'broadcast from home' scenario was a great success and resulted in not only a high number of sales for the time of day, but a great response from TJC customers saying they were impressed with the channel's technical expertise and professionalism.

"We are a falling-price auction-style home shopping channel, so low latency is not only important for the director, but also for the producer," continued Willingham. "Dynamic graphics and pricing updates are being uploaded and changed live on air, so Dejero CuePoint, in particular, allows producers to see what goes out before it's transmitted, and can correct mistakes and graphics quicker than ever before. This can be done whether we are broadcasting on location, or from home."

In recent times, TJC has been pioneering remote broadcasting in the live teleshopping space, successfully stepping outside the studio thanks to Dejero's EnGo transmitters and WayPoint receiver to create exciting programs. Before the pandemic, for example, TJC hosted a live broadcast showcasing Shelby Mustang products where they demonstrated six limited edition Mustang cars lined up outside of the building – a broadcast that was well received by the TJC audience.

"On our channel the products are key, but we are also there to entertain,” said Willingham. “Now, we can engage our audience in different locations, in ways that are fun and unique, which makes us very flexible. It no longer takes a day and a half to set up a studio; we can go from nothing to being ready to broadcast from anywhere in less than 30 minutes thanks to Dejero."

The channel also conducted a live broadcast on location in Tucson, Arizona, in February, where the presenters were selling product whilst walking amongst cacti – even in this desert location, connectivity was no issue with Dejero’s EnGo which uses Smart Blending Technology to aggregate multiple network technologies from multiple operators. It dynamically and intelligently manages fluctuating bandwidth, packet loss, and latency differences in real-time.

The teleshopping audience, which is so used to seeing products being showcased in a studio setting, were captivated by TJC’s new ability to bring products to them live from outside. The broadcaster plans to do more on-location shoots once the COVID-19 pandemic restrictions ease, with the help of Dejero.

"I’m very impressed with Dejero, not only with its technology but with its amazing, responsive support team," concluded Willingham. “The company’s ethos is all about reliable connectivity anywhere – and the technology they have to offer with regards to business continuity is fantastic."