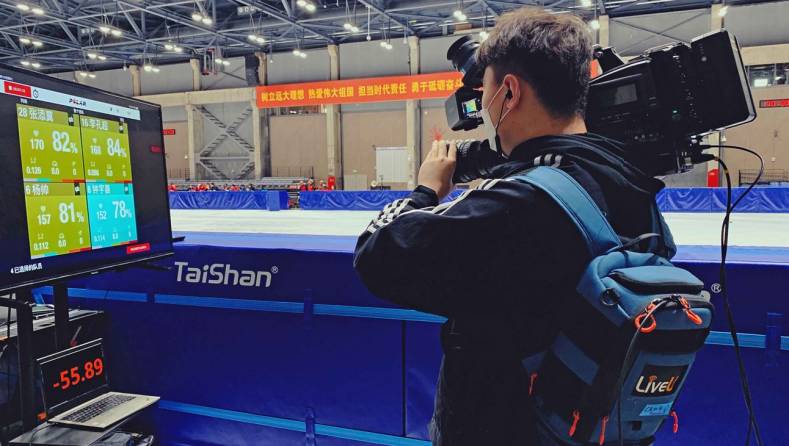 LiveU technology was used to stream live the Simulation Game of the International Skating Union (ISU) Championships in Beijing within the strict limitations of the lockdown.

Following the International Skating Union (ISU)’s postponement of the 2020 World Short Track Speed Skating Championships in South Korea, the China Short Track Speed Skating team decided to go ahead and organize a ‘Simulation Game of the ISU Championships’ in Beijing. Tencent Sports, the main broadcaster responsible for the live production and public broadcast, turned to LiveU to implement a remote production solution, deploying only the necessary equipment on site, including the cameras and wireless transmission units. All the rest, including production, contribution and distribution, was handled by Tencent personnel back in the studio in Tencent’s technical center.

This was challenging work within the strict limitations of the lockdown. The event organizer closed the stadium, didn’t allow an audience to minimize the risk of people gathering in one place, and limited the number of essential staff onsite. Tencent Sports used four LiveU LU600 HEVC bonding units, which provided solid high-quality live video streams with low delay. All the streaming came to a single high-density LiveU server, with the same delay, optimizing LiveU’s Precision Timing in its at-home production solution. With support from China Unicom, 5G signal was also available in the field – all the LiveU units combined both 4G and 5G connectivity to ensure optimal streaming conditions.

Ding Yi, Chief Director of Tencent Sports, said, “Remote production with fewer facilities and lower costs will undoubtedly become a major trend in sports production in the future. During this difficult virus period, it has showed unique advantage under circumstances which didn’t allow us to use the traditional ways of production. Looking ahead, we are keen to cooperate with world-leading technology providers like LiveU to deliver creative sports production solutions.”

The Simulation Game enabled the skaters to sustain their performance levels and continue their preparations for the 2022 Winter Olympics. The Game was organized in a way, which strictly followed the rules and regulations of the ISU World Championship.

Leading Japanese mobile operator wants to spread the value of commercial 5G to the world with LiveU.

One of the innovative services available to customers alongside Japan’s NTT DOCOMO’s newly-launched commercial 5G network launch is live video streaming as part of its value-added customer services. Japan’s number one mobile operator will be promoting a variety of LiveU’s HEVC bonding transmission products in a combined bundle using DOCOMO’s 5G and 4G connectivity. The solution offers high-quality and reliable low delay video streaming for broadcasters, sports productions, enterprise, government and other organizations.

Available through DOCOMO will be LiveU’s broadcast-quality HEVC solutions, including the high-end LU600 HEVC and compact LU300 HEVC, and other products.