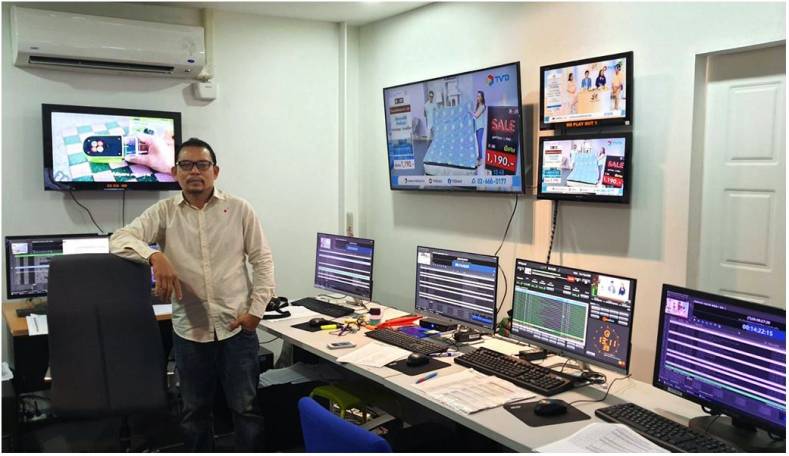 PlayBox Neo announces the completion of an expanded playout system at the Bangkok headquarters of Thai broadcaster TV Direct. The installation doubles the network’s capacity from three to six channels, transmitted in high definition via direct-to-home satellite and online.

The "PlayBox Neo Channel-in-a-Box (CiaB) system has the fourfold advantage of being installer-friendly, efficient to operate, easy to expand and highly reliable," says TV Direct's MCR Manager Akarachai Tobsin. "This new investment comprises three additional AirBox Neo-19 servers, each configured with the resources we need to schedule programs, commercials and promos as far in advance as the production team chooses to work. AirBox Neo-19 also allows us to make near-to-air changes in playout running order or to transmit live whenever we choose. In operational terms, the control GUIs go beyond intuitive by being relaxing on the eyes rather than imposing a lot of glare. Content can be accessed quickly, trimmed and finessed, all within the Neo-19 environment. That saves staff time and ensures maximum confidence. The servers are located at our satellite uplink service provider, PSI Broadcasting, here in the same city, and operated via secure IP links which carry complete program files as well as control data."

"AirBox Neo-19 delivers on each of our key business drivers: high quality, high reliability and high efficiency," adds PSI Broadcasting Technical Manager Rattana Taipong. "We have a total of 15 AirBox Neo servers shared across various clients plus three new servers to handle the TV Direct channels. AirBox Neo-19 gives us the ability to handle UHD, HD and SD content within a single server which makes it exceptionally future-proof at a time of advancing display standards. Most technical support is obviously now online but we appreciate the proximity of the PlayBox Neo Thailand office right here in Bangkok."

"We are very pleased to have partnered with TV Direct and PSI Broadcast in this project," adds Nut Deesamer, PlayBox Neo Branch Director, Thailand. "The TV shopping model continues to be very popular in many countries as it gives consumers a better idea of the products they can buy than the thumbnail descriptions given in most printed or online catalogs. Remote shopping is in any case becoming the new norm as consumers opt for product delivery rather than traveling out to traditional retail stores."

Centered on a scalable multi format parallel output playout/streaming engine, AirBox Neo-19 allows media files of various kinds to be combined into a single transmission playlist and supports simultaneous multiple SDI/IP streaming UHD/HD/SD outputs. Files can be trimmed, edited or re-positioned at any time prior to being aired without losing the freedom to transmit live. Playlists can be scheduled weeks in advance for automated transmission. Gaps and time overlaps are automatically corrected to ensure continuous operation even when events with conflicting times are present. Special protection is provided to ensure uninterrupted operation where content files or even entire schedules are missing or misplaced.

The graphics element of Channel-in-a-Box, TitleBox Neo-19, allows infinite layers of very high-quality graphic overlay to be created and manipulated during on-air. Its capabilities include text selection with transitions, the creation of horizontal crawling text, vertically rolling credits and messages, still and animated logo graphics, clocks and countdowns, coming-up-next banners and the display of data coming in real time from sources such as live RSS feeds and social media. Among the additional creative facilities of TitleBox Neo-19 are pre-constructed graphic components, video resizing (from live source or file), window-style display and website content ingest. Graphics can be controlled automatically or manually with full interactivity.