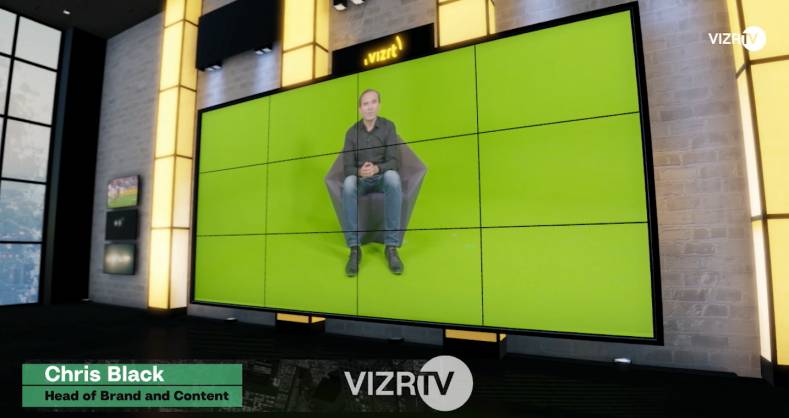 Using IP and the built-in Fusion renderer in the new Viz Engine 4.1, two individuals located in separate countries appear to be in the same room having a conversation in a live, 1-on-1 TV talk show format on Vizr.TV.

Claimed as a stunning breakthrough, host Chris Black appears seated in a lounge next to guest Gerhard Lang, CTO for the Vizrt Group, conducting a 1-on-1 interview. However, Chris is in the Vizrt Global HQ in Bergen, Norway while Gerhard is in the Vizrt office in Vomp, Austria more than 2,000 kilometers away. A virtual set provides a common background behind both individuals.

“The ability of Viz Engine 4.1 to key two or more independent streams at the same time while rendering and compositing everything together is the real magic here,” says Gerhard Lang, CTO for the Vizrt Group. “Getting good quality video from Chris’s location with very little latency to the Viz Engine 4.1 in Austria via public Internet was crucial for the keying quality and natural dialogues.”

Two Matrox Monarch Edge devices were used to send and receive SRT streams from Norway to Austria. Using Viz Engine 4.1, only two frames of latency for audio and video, in and out, in both SDI and IP mode are introduced into the stream. The low latency provided Chris in Norway the final composition in an IP stream for his reference monitors and for the final live production. Viz Vectar was added for cuts between clips and live, but also to send the live stream to Vimeo, Facebook and LinkedIn.

“The end goal should always be that the technology is an enabler, not a distraction. So while we can do amazing graphics, it’s more important that we can bring two people together in a nearly seamless way so they can have a natural conversation in real time, despite the distances involved,” says Black.