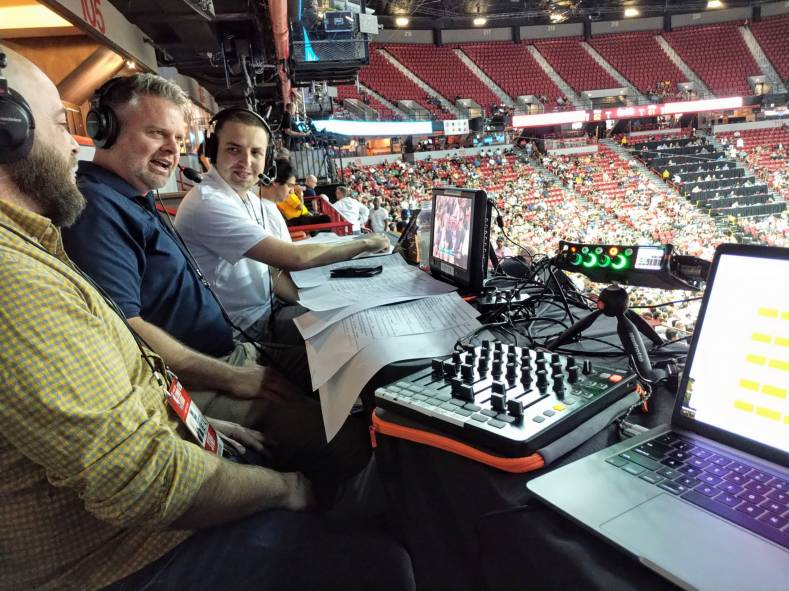 There was a time when college radio was run from a basement studio with poor audio quality and an inflexible workflow for producing live radio shows. With the help of its own dedicated cloud and virtualized remote production software, a Massachusetts company called Backbone Networks is looking to change all of that. They’ve developed a cloud-based phone system that allows users to broadcast live from virtually anywhere.

Beside typical radio gear, all that’s needed is a laptop computer and an Internet connection and you’re ready to go live, with multiple guests calling on their mobile phone or tablet from disparate locations simultaneously. Special software developed by Backbone Networks makes it all work with very little effort.

George Capalbo, CTO and Vice President of Backbone Networks said that they offer a collection of services via a subscription model that are helping existing AM/FM stations achieve greater production values while lowering operating costs and capital expenditures. The company also creates 24/7 online radio stations for companies, organizations, and seasoned radio veterans that want a turnkey station with minimal infrastructure.

All of the intelligence necessary to run a radio solution (radio automation, or cloud PBX for phones and studio quality remotes) resides in the cloud—which is actually a series of servers maintained by Capalbo himself. This 24x7 monitored data center sits on an Internet infrastructure for maximum reliability and scalability.

At a studio, or remote broadcast site, users launch software provided by Backbone on their local Macintosh computer that handles radio and phone/remote audio control. When you launch Backbone Radio, you see an encoder/cloud playout OnAirDisplay interface that allows you to make adjustments to audio parameters as necessary. This allows everything for any type of audio production to be done remotely. And when the studio is shut down, cloud automation keeps everything running on a schedule defined by the user. 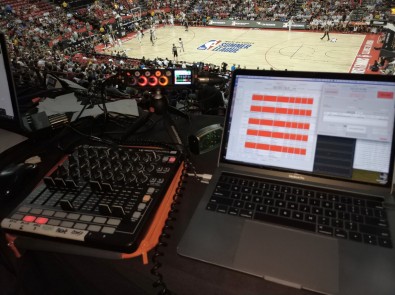 At a studio, or remote broadcast site, users launch software on their local Macintosh computer that handles radio and phone/remote audio control.

“We’re turning radio ‘inside out’ compared to the traditional broadcast model,” Capalbo said. “Forget about producing live over-the-air programs from a confining terrestrial radio studio, and then simul-streaming them. Backbone gives you the freedom of the cloud to work from anywhere you have an Internet connection.”

In February, Backbone Networks was helping several of its college radio clients produce live remote interviews from the Intercollegiate Broadcasting System (IBS) national convention in New York—an annual regional radio station trade show. All they had was a laptop, a mixing board, some headphones and two microphones. They simply logged into the Backbone network to set up a broadcasting session, and within seconds they were on the air.

The company offers its Backbone Production Suite, which includes a series of integrated tools and services used for producing and delivering audio programs and podcasts. While broadcasting live, users are accompanied by a live assist interface called Backbone Producer, which plays music/commercial stop sets live in studio (cloud or local files). It can also be used to manage a cloud-based schedule.

“The idea that I can very easily program, schedule and tweak a radio station from wherever I am with my MacBook is cool and amazing enough,” said John McDermott AltSportsTalk, Former VP, Comedy & Entertainment at Sirius/XM. The national radio broadcaster has been a Backbone client for several years. “But the idea that we can go live from anywhere with broadband is just awesome.”

The Backbone Production Suite allows users to access cloud-based service tools that: take on-air phone calls from listeners; team up with guests and co-hosts in other cities, live, in studio quality; allow roving correspondents to report live with just an iPhone or iPad; invite after-hours voicemails from listeners (“Crank Line”) for on-air play; and even schedule syndicated shows—through Backbone’s network in the cloud.

“The goal is to make it easy to get online and start broadcasting from anywhere,” Capalbo said. “As internet connections get better and better, we’re seeing an increased use of this public distribution method for a wide variety of audio programming. With Backbone Radio, your transmitter is in the cloud, as is your automation system. This is what gives you incredible mobility and on-air reliability.” 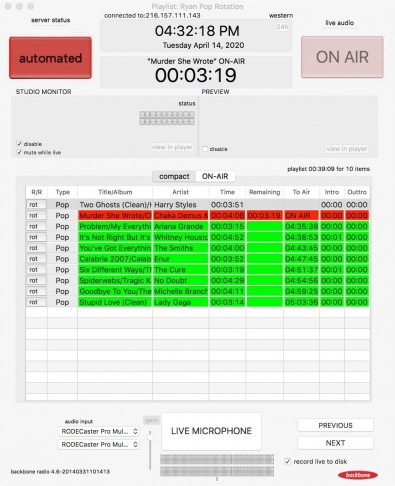 The company has also developed Backbone Talk, a telephone interviewer system that uses a cloud-based audio data delivery infrastructure, designed specifically for professional Talk/News/Sports stations and now counts many among its customer list—such as The London Daily Mail, SportsGrid/FNTSY Radio Network, Sirius/XM and Nexstar, which is using the Backbone Talk software for IFB to affiliates around the country.

Another feature, Backbone Co-Host, enables users to conference in studio quality live feeds from co-hosts around the world. Using the Luci Global service from Technica del Arte and its free, downloadable apps for iOS, Mac, Android, and Windows platforms, show producers can conference callers and worldwide talent on one interface screen. And these guests and field reporters only need an iPhone or iPad to join a program live.

At the cancelled NAB Show, the company was planning to show Backbone CoHost PL, a way for stations to create an always-available “Party Line” conference room for one or more hosts, guests, and correspondents to contribute to live audio broadcasts. CoHost PL is a simplified, unswitched version of the company’s CoHost service, allowing users to instantly join the broadcast with the touch of a finger. There are no IT settings to configure, no port selections to worry about, and no equipment to purchase or forget in the car. It all works with whatever you’re carrying and over any decent Internet access you can find.

“At the end of the day it’s all about your program quality, your listener interactivity and your success; they all go hand-in-hand,” Capalbo said. “You concentrate on the creative and business aspects, and we provide the products to help your station prosper…on all levels.”