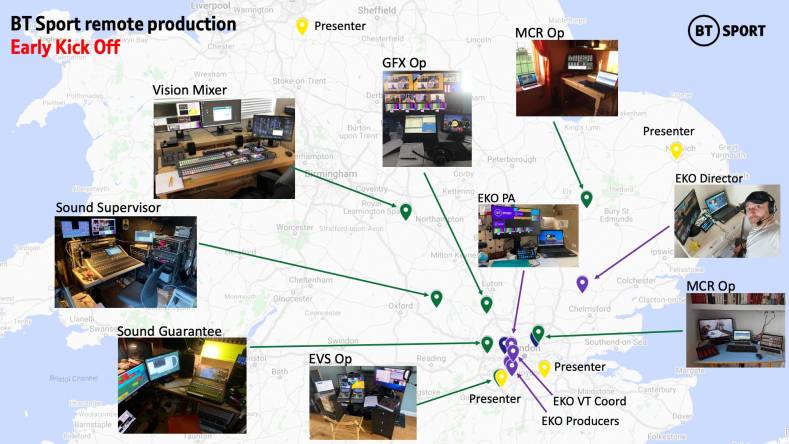 In response to quarantine conditions and for the sake of business continuity, BT Sport has moved its entire production operation out of its studios at the Queen Elizabeth Olympic Park, Stratford, and in less than three weeks turned it into a decentralised remote operation.

At the same time, in the absence of fresh live events, it has revamped some of its programming around live hosted links and punditry around archive content.

Seven new topical programmes are being produced live or nearly live with all on-screen participants working alone, based out of their own homes, connected to the production teams by broadband or over EE’s 4G mobile network.

Although BT Sport could have continued to use its Stratford facility, Jamie Hindhaugh Chief Operating Officer decided to go with almost entirely virtual. Editing, compliance, scheduling and access to media management, is now accessible off site.

“I felt that anything we did as a broadcaster had to reflect the challenge our audience are facing. We don’t want to be promoting the idea that travel is in anyway helpful at this time. So, for me, as soon as you see someone in a studio, you know they’ve had to travel there, and that includes the host. It’s about reflecting back to people that everyone is in this together.”

Explains Hindhaugh, “We’ve had a huge challenge at BT Sport with the lock down and our intention to keep our staff safe. We wanted to respect and support the government guidelines around social distancing so we’ve worked hard with our key supplier timelines to create a true virtual remote gallery.”

Remote production is hardly new and BT Sport has previously experimented with workflows. Necessity being the mother of invention and all that and so BT Sport has managed to go one step further.

“Remote is about centralising your back-end operation in one place, but what we’ve done is created a virtual representation of that central gallery and put that across the UK. Normally in an MCR you’d have lots of talented staff working together in close proximity, but what we’ve done is distribute all of those crucial functions back into their own homes spread right across the country.”

Chief Engineer Andy Beale explains that they started with the MCR at Stratford by setting up positions for their lead MCR engineers in their own houses.

“We set up two vision mixers at home with full vision mixing tops and all the monitoring and multi-viewers you’d expect to find in a gallery,” Beale said.

Some presenters have had broadcast cameras set up in their home, others have remote controlled PTZ cams. Some are even using the latest iPhone enabled for broadcast use by Timeline TV.

Live shows to be produced in this manner include the Sunset+Vine production Early Kick Off, Scottish Football Extra on with hosts across Scotland and the rest of the UK; Live: MotoGP The Greatest Race; and Live: UEFA Champions League + One Year, which will be rerunning cut downs of previous season’s Champions League and Europa League.

Hindhaugh says he will be determined to change how BT Sport works moving forward. “This workflow means you can have a more inclusive workforce, employing people who could normally not get to Stratford.”