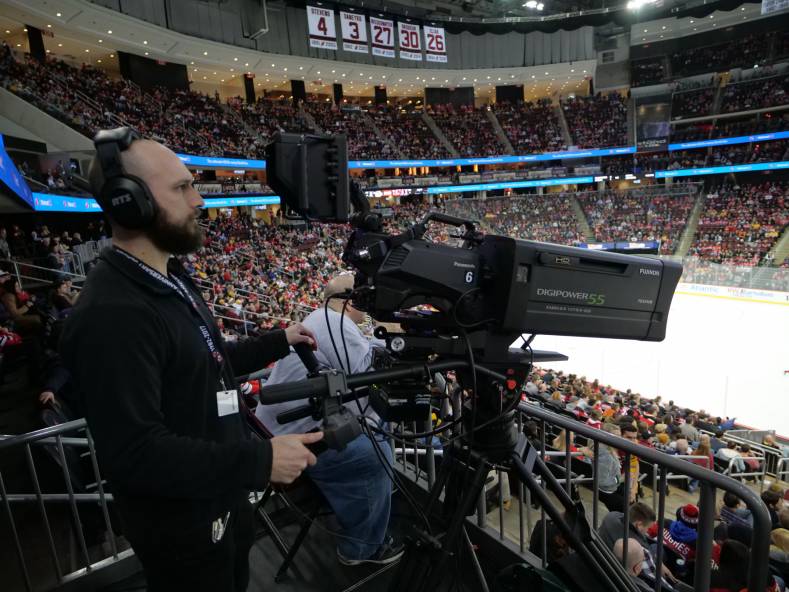 In addition to the game action, four AK-HC5000s and an AW-UE150 4K/HD 60p pan/tilt/zoom camera are helping to enhance the fan experience.

Prudential Center, home to the NHL’s New Jersey Devils and NCAA’s Seton Hall Pirates men’s basketball team, has upgraded to Panasonic AK-HC5000 HD HDR studio/field camera systems for all in-game presentation on the arena’s large (almost four stories tall) center-hung LED scoreboards. The new HD cameras (shooting at 1080i/59.94) have been up and running since September and have significantly improved the picture quality on the video board.

“Our video board is used for various live events, including New Jersey Devils hockey, Seton Hall University basketball, multiple graduations and select concerts and family shows,” he said. “As a top ten venue in the world, we need top-of-the-line and reliable equipment and that is what we have found with our partner Panasonic.”

They had previously used three DVCPRO HD tape-based cameras for the video board feeds. They have replaced those with the HC5000 and they “could not be happier with the product.”

In terms of camera placement, two stationary AK-HC5000s are situated on tripods across from each other on either side of the rink, behind the lower section of seats. These cameras are placed on raised platforms that afford a good view of the ice action. Two roaming AK-HC5000s are used during timeouts in the action as fan cams or for in-game contests or presentations. 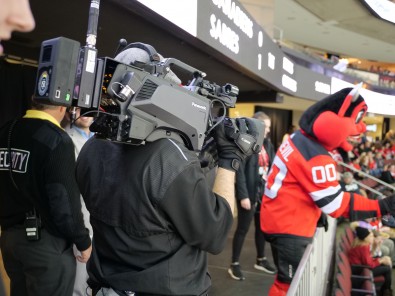 The new HD cameras (shooting at 1080i/59.94) have been up and running since September and have significantly improved the picture quality on the video board and the overall fan experience.

Prudential Center is also using the AW-UE150 PTZ camera mounted in the catwalk to afford a permanent live shot of the DJ and Organist for in-game features.

“We go to our DJ each game and our organist at least 20 times a season, and the UE150 gives us the flexibility to free up our other camera operators to roam the building and not be locked down on a specific location for an extended period of time,” Kuchie said. “We went with this 4K model because we want to provide the best possible picture quality for our scoreboard and our fans.”

Sergio Camacho, Director, Content Production, for the New Jersey Devils Studios, said they produce content that is seen nationally and regionally on the NHL and MSG networks.