As Tim Burton’s The Nightmare Before Christmas toured the UK at the end of 2019, violinist Sandy Cameron was presented with a new miking technique: Point Source Audio’s Embrace EO-8WL earmount microphone. 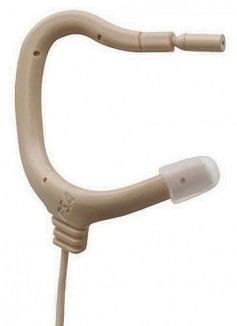 Point Source said the on-ear mic idea came from audio engineer Paul Bevan, who has been working with Danny Elfman on his live projects for five years. Previously the production had used a clip-on microphone into a wireless pack for the violin. "Because it is attached to the instrument, it tends to have a slightly unnatural sound, with too much body and too much ‘zing’ from the strings,” said Bevin. "I wanted to find an approach that would give a more natural sound.”

To achieve this natural sound, Bevan opted for Point Source’s EO-8WL. These mics are engineered for concealing, but the mounting system keeps the mic placement consistent. This delivers the best of lightweight and low-profile lavs combined with the consistent placement of earmounted microphones.

It was an approach he had tried before when using the technique for the first time with violinist Joshua Bell for a TV show which presented similar challenges of natural sound while looking good on camera, so he was confident it would also work for the tour.

“The microphone is placed on top of the left ear, so during performance, it is sitting right over the violin, but the extra distance from the instrument gives a much more natural sound, with more ‘air,’ “ Bevin said. "I was anxious to try this approach with Sandy and she was keen to try something that would more accurately represent what she herself was hearing from the instrument.

“It sounded much more natural to her and I had to do almost no EQ-ing to get it to sound just like the acoustic instrument,” said Bevan.