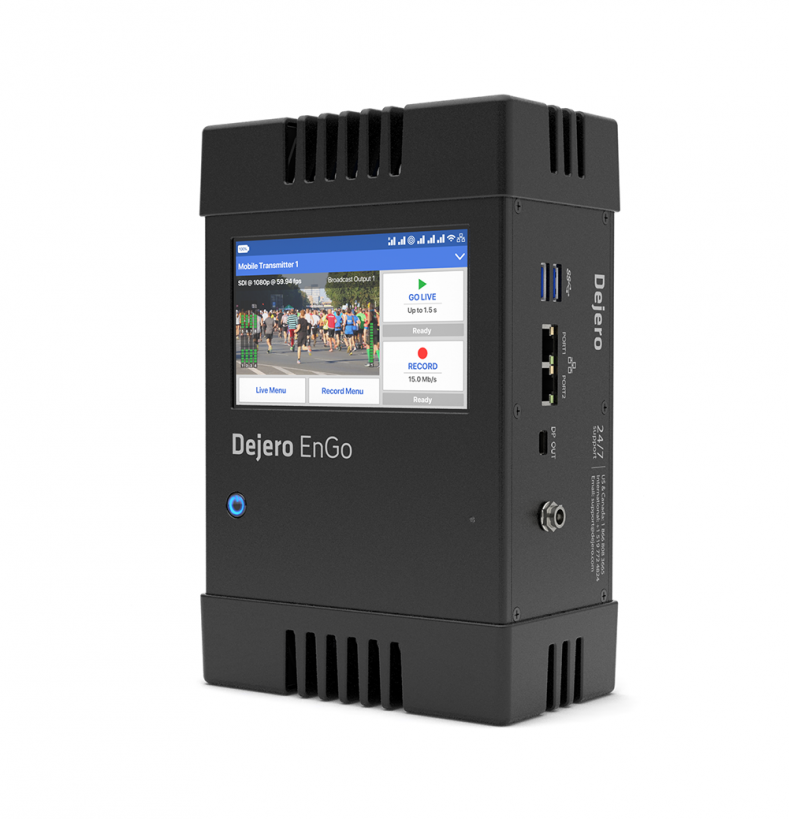 The latest version of Dejero's EnGo mobile transmitter makes an NAB debut. Featuring Dejero's Smart Blending and Hybrid Encoding technologies, the 5G-ready EnGo 260 weighs 30% less than its predecessor, features a screen that is 85% larger, and now includes a 3-hour internal rechargeable battery and global modems for simplified international travel. Built with aircraft aluminum construction and polycarbonate ABS bumpers, the module is designed for daily use by news, sports, and live production crews.

The company will be unveiling a new, smaller form-factor CuePoint server for use in field environments where it can be easily racked into mobile carts or vehicles. This follows the launch of the 1RU CuePoint 100 at last year's NAB. The low-latency return feed servers simplify talent cueing, production and confidence monitoring, and real-time teleprompting in the field. With as little as 250 milliseconds of latency, CuePoint servers keep teams at the broadcast facility and remote location synchronized, by sending video and audio, alongside teleprompting feeds, to production teams in the field to facilitate the creation of compelling live content. Up to eight return video and teleprompting feeds from the broadcast facility can be seen in the field by the talent on a tablet or dedicated monitor above or below the camera, or on multiple mobile devices by camera operators, field directors, and technicians.

The WayPoint 204 receiver is the first Dejero product to support SMPTE ST 2110 standards for professional media industries. This reconstructs video transported over multiple IP connections from Dejero transmitters, decodes HEVC or AVC, delivers four channels of balanced IFB, and provides four outputs supporting SMPTE ST 2110. For broadcasters using SDI workflows, Dejero will be debuting a new, smaller form-factor of the WayPoint at NAB for use in field environments, where it can be easily racked in mobile carts or vehicles.

A new fanless networking appliance for nomadic and mobile connectivity, Dejero GateWay 200 provides access to the public Internet, private networks, and SaaS providers while in nomadic or mobile situations. Recently added features include increased reliability on any type of IP connection and faster file transfer methods.

The IronRoute for Media solution blends broadband and cellular (3G/4G/5G) alongside satellite connectivity from Intelsat’s global network. The cloud-based solution also simplifies the simultaneous distribution of live and file-based content to multiple locations anywhere in the world, whether it be network affiliates, station groups, or to other broadcasters and media organizations in point-to-point, point-to-multipoint, and multipoint-to-multipoint scenarios.

In January 2020, it was announced that Dejero had been awarded a second Technology and Engineering Emmy, in the category of Video over Bonded Cellular Internet (VoCIP) technology. The award is attributed to the development of its patented Smart Blending Technology and Hybrid Encoding Technology.