At the BBC’s master control facility in Glasgow, there is no staff. An IP feed management system from Zixi is used instead.

The BBC Scotland opened its broadcast center at Pacific Quay in Glasgow in 2007 as an SDI HD facility with traditional satellite-based contribution downlink capability. Over the last 10 years, however, they have gradually moved to IP contribution and the benefits have been significant.

Initially this was just in newsgathering using IP satellite systems and mobile bonding encoders, but then as venue connectivity improved, more and more traditional TV outside broadcasts started taking advantage of IP contribution to reduce costs or increase resilience.

They do still use satellite feeds from SNG vehicles but these vehicles are usually now hybrid IP/Satellite vehicles making use of the most appropriate contribution technology for different situations. 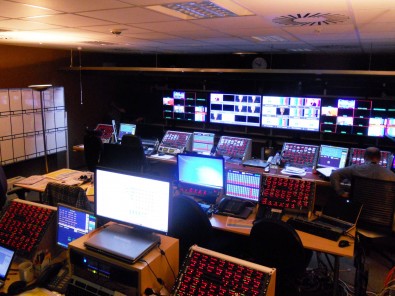 The primary motivation for the move to IP contribution was to reduce operational costs and improve productivity. For the same cost, they could either have a small number of traditional SNG facilities or a much larger number of IP contribution systems that could be more widely spread across the country.

This IP migration strategy then developed to incorporate more traditional television and radio OB vehicles, where the key development was the inclusion of IP stream protection technology, including the Zixi Software Defined Video Platform. Being able to use a venue internet connection without worrying about packet loss on a public internet connection was essential, but this required a trade-off with latency. More time is needed to allow for packet re-transmission.

This approach fits much better into the outside broadcast model rather than the newsgathering model, since news is typically a two-way conversation where latency is critical, as opposed to a ‘mixer out’ feed of an entire OB where latency is less important.

The Zixi technology is monitored via the Zixi Zen Master, a cloud-based interface that features visual tools monitor live broadcast channels. Zen Master allows BBC Scotland to gather historical statistics about feeds that can be extremely useful for remote monitoring and debugging and avoiding having to spend too much time in the office watching graphs. 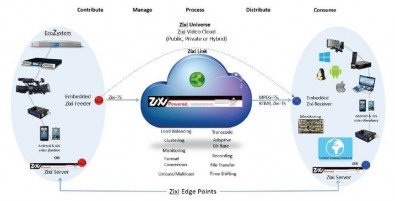 At BBC Scotland, Zixi Broadcaster serves as an IP matrix, allowing X-Y routing of IP feeds prior to decoding signals to SDI.

The typical model in broadcasting is to have a Master Control Room that is staffed to manage in-coming feeds. At the BBC’s facility in Glasgow, there is no staff. So what was needed was an IP feed management system that didn't require human intervention. Initially they would get the sending end to choose the IP address of the decoders directly but this was fraught with issues and always had the risk of two encoders trying to send to the same decoder. At BBC Scotland, they use the Zixi Broadcaster as an IP matrix, allowing X-Y routing of IP feeds prior to decoding signals to SDI.

The Zixi system has allowed any enabled encoder to stream at any time with no risk, as it is only routed to an encoder when someone wants to decode the feed. Therefore, integrating with the master control system allows an abstraction of the source from the details of decoding the feed.

The gallery can now select the source by name and the master control system will route the right IP source to an IP decoder and on through the existing SDI router to the gallery outside source.

The fact that these IP sources also benefit from the stream protection allows for stress-free IP contribution. Rather than worrying about whether a venue-provided internet connection is completely perfect, it just has to be “good enough”, as the Zixi system is able to cope with large amounts of packet loss that would kill any unprotected feed.

All of the general OB (software-based) encoders are set up using Zixi protection tools and all feeds can optionally use end-to-end data encryption (using industry-standard AES ciphers with up to 256-bit keys).