Manfrotto is now in the memory card business, introducing a range of cards claimed to be the toughest available on the market. 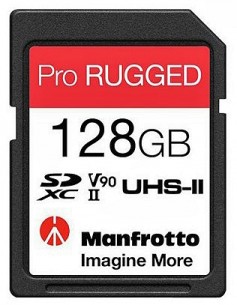 Manfrotto is offering SD, MicroSD and CompactFlash "Pro Rugged” cards. They are being marketed as a combination of high-speed performance with waterproof, crush-proof and temperature-proof build quality that can withstand extremes of use and conditions.

The SD cards are sealed against water and dust, and can remain underwater for up to 72 hours without suffering damage. The cards are made from a solid moulded piece of plastic and are three times stronger than normal cards.

Manfrotto said the cards can survive a 44-pound impact. Tested in temperatures of between -25 degrees C to 85 degrees C, the SD cards come in 64 and 128GB capacities and have a V90 rating that has 280MB/s and 250MB/s read/write speeds.

The Compact Flash cards aren’t waterproof. However, Manfrotto said they will last longer than standard cards and can withstand a 77-pound impact. They are suited to use in temperatures of between freezing and 70 degrees C.