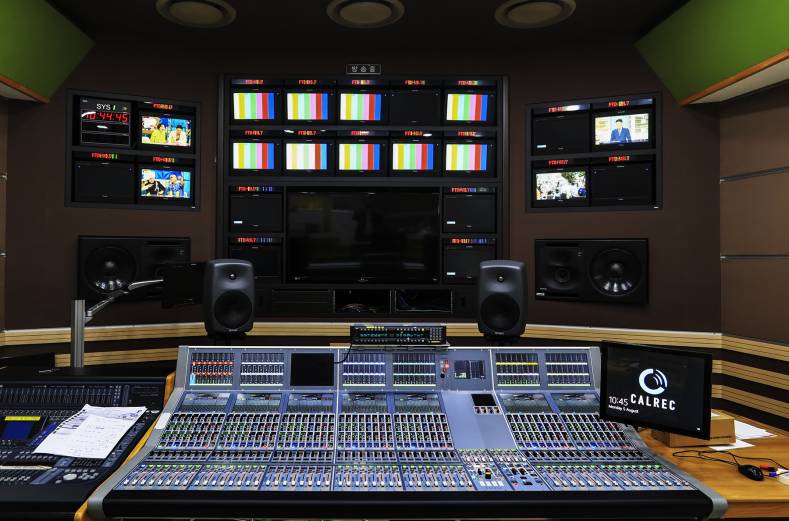 At MBC the new Apollo consoles are used for the production and recording of live-to-tape UHD and HD news and current affairs content.

Munhwa Broadcasting Corporation (MBC), which is based in Seoul, South Korea, and has an extensive installed base of Artemis and Apollo consoles, has purchased two additional Apollo consoles from Calrec Audio for its flagship MBC TV channel. MBC representatives said the Apollo, with its level of processing power and superb sound quality, is the ideal fit for MBC TV’s live programming needs.

“The Apollo surface is easy to use when working live because we frequently have to adjust parameters during a broadcast, including channel dynamics and routing,” said Ji-hun An, Audio Director, Sound Department at MBC TV. “The Apollo’s control surface makes this simple, and its high DSP count means configuring it for different projects is straightforward.”

At MBC, one of the new Apollo consoles is installed in studio C, which is used for the production and recording of live-to-tape UHD and HD news, current affairs and wider cultural content. The second is in studio E, where similar content is produced for live-to-air broadcasts. MBC use a fixed format MADI box for multi-track recording in both studios.

MBC TV is a South Korean free-to-air television channel owned by Munhwa Broadcasting Corporation, which operates numerous TV and radio channels as well as digital video and audio streaming services. MBC TV operates its headquarters in Seoul and has 16 regional studios throughout South Korea. It also has a fleet of OB vans that cover news and sports. The installation was handled by Calrec’s Korean distributor Ingang Audio.