Riedel will leverage Embrionix’s SDI-to-IP SFPs and other products for its MediorNet video transport networking system.

Over the past few years Riedel Communications has been expanding both organically and through acquisitions to better align itself with the new demand for IP technology and infrastructures. In fact the Wuppertal, Germany company, has been promoting a networked approach to video infrastructures with its MediorNet real-time media network for more than a decade.

MediorNet uses a proprietary video transport system on a closed fiber ring that can be configured in a hybrid IP environment. Users looking to migrate to IP have the choice to add IP end-points to the network as needed, via a series of gateway products, while continuing to operate in the baseband world. The MediorNet MicroN IP App includes support for up to 4 SMPTE ST 2110-20 inputs and outputs plus 4 baseband 3G-SDI signals and 8 3G-SDI outputs, with 4 of those dedicated to monitoring the ST 2110-20 streams.

Continuing its push into native IP video transport, Riedel has just announced its acquisition of Embrionix Design (headquartered in Montreal, Canada), which has been developing SFP-based IP video processing products for several years that are now used in a variety of ways to get video into an IP environment. (Financial terms were not released.)

“With Embrionix in the fold, we now have a better roadmap into the IP world as a comprehensive migration strategy for customers,” said Joe Commare, Marketing Manager for North America at Riedel Communications. “It will help to make MediorNet a truly native IP infrastructure instead of just IP in-points. And by acquiring Embrionix and its talented engineering team, this vision will come to market sooner.” 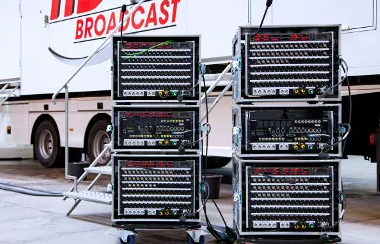 Many live productions now use MediorNet connected over a 10 Gbps optical fiber network for a fully redundant, decentralized routing matrix.

In a statement Thomas Riedel, CEO, Riedel Communications, said that “Sometimes, things just fit. Our company philosophies are an ideal match, and our product portfolios and competencies complement each other perfectly.”

“Riedel is an international player, and we can offer Embrionix all of the benefits of a comprehensive global sales and support infrastructure,” he said. “Embrionix, on the other hand, has access to unique technologies and proprietary knowledge that will be instrumental in our quest for innovation leadership in the field of video infrastructures.”

Riedel has been busy acquiring companies that bring new engineering talent. [Commare said “it’s not easy to find good video processing engineers.”] In February 2018 it bought Zurich-based engineering company Archwave, an audio-networking and streaming specialist. As part of that agreement, Riedel also acquired Cymatic Audio, an audio specialist within the music industry. At the time it was said that the move would allow Riedel to enter new markets and get closer to musicians, who already rely on Riedel technology in the background.

In February 2007 Riedel acquired a company called Mediornet, a developer of multimedia network technologies in Vienna, Austria, and has continued to upgrade and improve on the technology ever since.

Embrionix was founded in 2009 and provides miniaturized, high-density IP gateways, IP signal processors, and converters for broadcast video applications. Since pioneering the use of small form-factor pluggable SFP modules for signal processing early in its history, Embrionix has been granted more than 20 patents.

With the Embrionix acquisition, Riedel gains access to considerable engineering talent in the Embrionix workforce — the majority of which comprises engineers specializing in leading-edge IP and video technologies. Embrionix employs a team of 50 engineers and experts and maintains design, R&D, and sales offices around the world. With the Embrionix team joining the Riedel family, Riedel Communications will grow to over 700 employees.

Renaud Lavoie, CEO, Embrionix, said that his company’s high-density IP gateway and processing solutions will greatly enhance the MediorNet ecosystem and expand its application areas. Now with Embrionix, Riedel gains an in-house SFP provider and we have a whole new team of engineers to take advantage of.