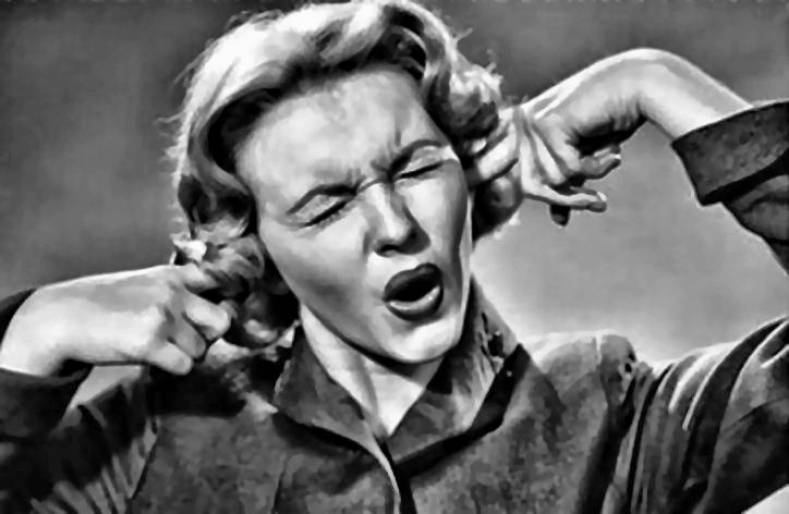 We are hearing acoustic feedback — the sound that occurs when the amplified sound from a loudspeaker re-enters the sound system through an open microphone. The sound is amplified and re-amplified again and again building to an intolerable acoustic level.

Most times feedback is accidental. Other times it can be used as a creative recording effect. One such situation involved The Beatles' 1964 recording of “I Feel Fine."

"John (Lennon) had a semi-acoustic Gibson guitar. It had a pickup on it so it could be amplified. We were just about to walk away and listen to a take when John leaned his guitar against the amp. He really should have turned the electric off. It was only on a tiny bit and John just leaned it against the amp when it went 'Nnnnnwahhhh!' And we went, 'What's that? Voodoo?' 'No, it's feedback.' 'Wow, it's a great sound!’

George Martin was there so we said, 'Can we have that on the record?' It was a found object, an accident caused by leaning the guitar against the amp,” said Paul McCartney in an interview for Barry Miles’ book, Paul McCartney: Many Years From Now.

For most musicians and engineers, however, audio feedback is something to be avoided. The most basic public address system consists of a microphone, an amplifier and one or more loudspeakers. Whenever these three components are used together, the potential for feedback exists.

Assume a microphone is placed in front of a speaker. If the microphone is tapped, the sound of the tap goes through the amplifier, comes out the speaker and re-enters the mic. This feedback loop happens almost instantly. It creates its own frequency, and that produces the howling sound — an oscillation triggered by sound entering the microphone.

Some ways to avoid feedback involve a few simple fixes. One is to train vocalists on how to properly use a microphone. Those who cup their hands around the mic capsule are not only creating bad sound but asking for feedback trouble. This amateur mishandling of the mic changes the directional nature of the microphone, making it essentially an omnidirectional microphone.

Shure offers many tips for microphone usage. Use a directional microphone to increase the amount of gain before feedback. Reduce the number of open microphones – turn off microphones that are not in use. Don't boost tone controls indiscriminately. Try to keep microphones and speakers as far away from each other as possible.

Use in-ear monitoring systems in place of floor monitors. Acoustically treat the room (if possible) to eliminate hard, reflective surfaces like glass, marble and wood.

Once these simple non-technical solutions have been tried (and presumably failed), the next step is to look toward equalizers and automatic feedback reducers. Usually, at this stage, the room is the problem. The space is emphasizing certain frequencies based on its geometry.

Engineers call these room modes, a collection of resonances that exist in a space when the room is excited by an acoustic source such as a loudspeaker. Most rooms have their fundamental resonances in the 20 Hz to 200 Hz region, each frequency being related to one or more of the room's dimensions.

A common technique used by sound engineers is "ringing out" a sound system by using a graphic equalizer to reduce the level of the frequencies that feedback. This involves slowly bring up the system level until feedback is heard.

Then the engineer goes to the equalizer and pulls down the offending frequency roughly 3dB. If the feedback is a "hoot" or “howl,” try cutting in the 250 to 500 Hz range. A "singing" tone may be around 1 kHz. "Whistles" and "screeches" tend to be above 2 kHz. Very rarely does feedback occur below 80 Hz or above 8 kHz.

After locating the first feedback frequency, begin turning up the system again until the next frequency begins ringing. Repeat the above steps until the desired level is reached, but do not over-equalize. Keep in mind the equalizers can only provide a maximum level increase of 3 to 9 dB.

Some manufacturers decide to automate their equipment for handling feedback. For example, a mixer like the QSC TouchMix offers both automated room tuning and a set of automatic feedback suppression filters. This feedback suppression requires the push of a button once feedback is heard. It automatically finds and eliminates it.

There are many tools and software apps to help users through the process of making a sound system more stable and less prone to feedback. But, first, remember the basics. It will help avoid the problem in the first place.