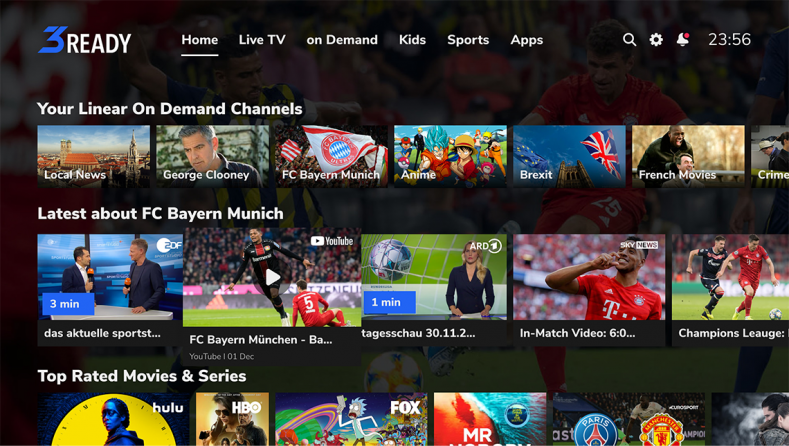 3 Screen Solutions (3SS) has teamed up with Media Distillery and XroadMedia to develop a platform for delivering personalized linear TV services via Android TV.

The three companies have coined the term Linear on Demand (LoD) to describe their Android based platform which they claim will facilitate personalized linear TV services, allowing assets to be curated from a diverse range of sources. Such sources include live TV, catch-up, VoD, apps and web sites.

Whether the new acronym will fly is debatable given that a wider industry effort to float SLIN (Subscription Linear) as a term for online subscribed linear services, to distinguish them from SVoD supplied by the likes of Netflix, has almost sunk without trace. That acronym was in any case rather redundant considering it merely applied to online versions of services that already existed from traditional pay TV operators. At least 3SS can claim that LoD describes a somewhat new breed of online service combining all sources of content, although in that case the word linear is a misnomer.

At any rate 3SS did introduce the concept over three years ago at IBC 2016 when it launched 3READY, a multi-device package combining IPTV and VOD based on a front-end template with customizable layers. This was presented then as an enabler of LoD, described as a “revolutionary new paradigm in personalized, unified digital entertainment.”

Since then 3SS has decided it needed the help of two other vendors to relaunch the LoD concept. 3SS, based in Ludwigsburg, Germany, itself provides the Android TV platform as the foundation for integration, while Media Distillery, headquartered in Amsterdam, contributes content discovery with the help of machine learning algorithms to drill down into the video for more accurate description of the contents. The company says this allows it to generate metadata describing content at an object level on the basis of faces, words spoken, logos and text.

The three vendors hope this joint portfolio will enable a greater level of personalization than any of them can achieve on their own by combining more granular user profiles with accurate content metadata. Assuring the quality of existing metadata is one of the key challenges for operators in aligning content accurately with what subscribers would like to watch at given times and circumstances.