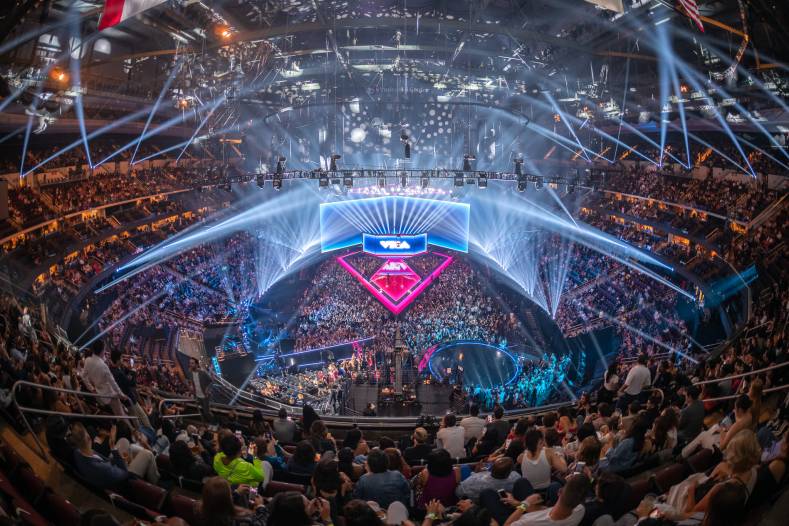 “MTV and Viacom continues to push the limits on television production year over year, and for us that means new scenery with massive amounts of integrated video,” said Trevor Burk, Creative Director and Screens Producer at Visual Noise Creative, the entertainment design firm which deployed the servers. “The set that Julio Himede designed this year was no exception and was almost entirely made of video. We needed a platform that enabled us to be creative, flexible and fast enough to get this monster of a show on its feet in a short amount of time.”

He continues, “We have found that the disguise ecosystem programmed on a console allows us to work at the pace of a broadcast awards show and handle the inevitable curveballs that come with putting a show that size together in a matter of days. Disguise’s flexibility and heft of feed maps provide the ability to accommodate the inevitable changes without sacrificing the creative development that’s ultimately most important to our success.”

In selecting the disguise gx 2s Jared LeClaire, Content Director and Workflow Producer explains that, “we needed a system that was scalable, able to manage a variety of incoming data streams and capable of playing back multiple layers of 8K content. disguise met all of these requirements and had the added benefit of content/output mapping flexibility and media management tools.”

“On a show like this the use of screens transcends video and actually becomes all of the scenic environment and one that puts off a massive amount of light,” Burk explains. “We need to be able to collaborate alongside the production designer and lighting designer to help create pictures that blur the output of those departmental lines. We can only achieve this if we have a toolset that is robust enough to keep up.”

The awards saw performances from Taylor Swift, Shawn Mendes, Missy Elliot, and Miley Cyrus. Broadcast globally, the show saw an audience of over 1.5 million tune in to watch the show.