The Eurovision Song Contest is one of the most anticipated international music events of the year.

When the 2019 Eurovision Song Contest found that their Tel Aviv venue did not have ISDN lines to stream the reporters’ commentaries, an ingenious software called LUCI let their voices be heard.

For several years I have been following the development of LUCI, a clever VOIP (Voice Over Internet Protocol) software made by Technica Del Arte in The Netherlands that turns a mobile phone (iOS or late model Android), or Windows, MAC or Linux PC into a broadcast-quality recording system.

At the May 18th finals of the 2019 Eurovision Song Contest, held this year in Tel Aviv, Israel, there was no ISDN network at the city's convention center, Expo Tel Aviv, for all the reporters and commentators who were covering the performances online during the 64th edition of this hugely popular international event. So, when Riedel Communications was contracted by the host of the whole event, the EBU (European Broadcasting Union), they turned to Joost Bloemen, founder of Technica Del Arte and co-author of the software, to bring LUCI to the rescue.

Although 41 countries participated in the 2019 Eurovision Song Contest, from Albania to the UK, garnering an audience of over 200 million viewers worldwide, the one major country to which it was NOT broadcast was the good ol’ US of A.

But fortunately, LUCI’s progenitor, Bloemen, was good enough to fill me in on the extraordinary details surrounding this mega music fest. 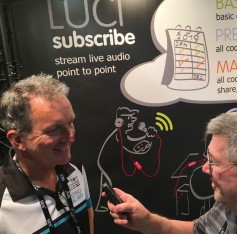 “Our LUCI software was officially launched at IBC 2004,” Bloemen began, “and since then it has spread from the Americas to Europe, Africa, and throughout Asia. Still, this year’s Eurovision Song Contest provided us with a challenge we hadn’t faced before.”

Of course, every country’s remote broadcasting crew had set up their own audio/video feed to their specific country’s viewership to cover the event in their native language.

But that left out the huge and growing Internet audience who were hoping to count on streaming sources to tune in to the commentators reporting on the songsters on the Tel Aviv stage. 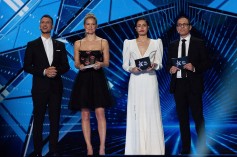 In the end, Bloemen’s team was able to provide LUCI Studio software on USB sticks to the international polyglot reporters and commentators covering the happenings. In fact, they arranged for only two lifetime licenses to be used for 63 live streams bringing reportage of the music fest to all the countries in the world who were involved.

As you'd expect, at the 2019 Eurovision Song Contest the reporters/commentators were sitting in soundproof booths to voice their coverage.

But when LUCI is used in a more conventional field reporting mode, Technica Del Arte has created what they call a MIKI cable that lets you connect your microphone via XLR, and headphones after a +7dB integrated pre-amp with a stereo 3.5 mm socket.

The MIKI cable, designed and manufactured by Technica Del Arte.

Most interface directly with the audio device itself through a Type C-USB plug which works great on Android and iPad pro devices.

(BTW, “MIKI” like “LUCI” are not acronyms with hidden meaning. Bloemen tells me they are just nice sounding names that end with “I” to confound the ubiquitous trend of prefixing product names with “i”. After all, “iMIKI” or iLUCI” just don’t sound right.)

This custom cable arrangement lets the reporter monitor an ongoing interview with no risk of feedback.

But since Technica Del Arte manufactures their own MIKI cables, in these days of muscular iPhones what they really needed was an Apple-compatible Lightning connector. 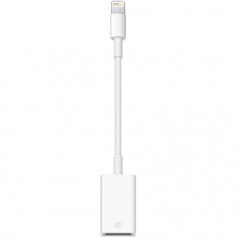 The MD821-Lightning adaptor for iPhones

“We could not find a Dutch Apple-approved/certified manufacturer willing to provide this connection to our cables. And this is mandatory Apple policy,” Bloemen said. “However, we came up with our own workaround by modifying the Apple USB to Lighting camera adapter to the MIKI-D USB connector, and this ‘fix’ is included into the package for MIKI-D type-A cables at no extra cost.”

So with LUCI software and a MIKI cable you have a broadcast-quality take-it-anywhere field recording system that can easily fit into a back pack.

Bloemen told me this might be a bit easier when they repeat the arrangement at the 2020 edition of the Eurovision Song Contest since it is expected to be held in Rotterdam, The Netherlands.

Wouldn’t it be great if the U. S. could see that one live?

Even if the commentators have to rely on a streaming feed, once again it might be LUCI to the rescue.