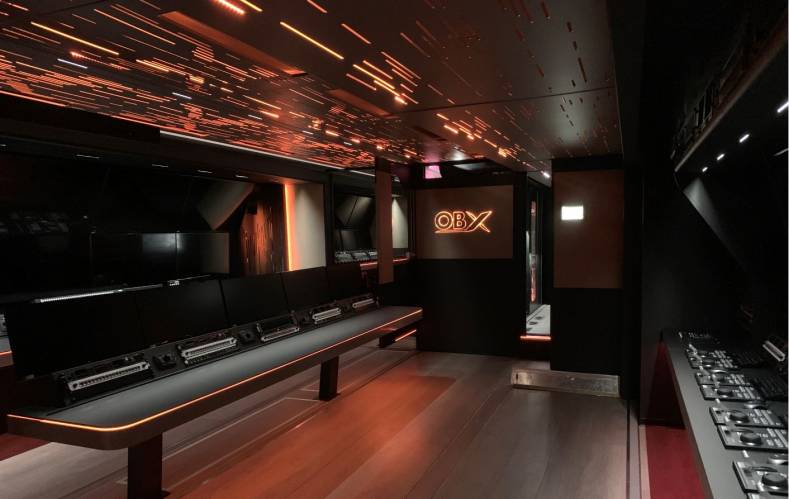 Videe’s OBX is one of the largest native 4K HDR OB trucks in Europe and ready to go into service after its IBC 2019 unveiling.

Imagine Communications solutions were recently integrated into two high-level infrastructure projects with opposite needs and geographies.

Italian systems integration company Chromaline has built OBX, a flagship production unit for Videe. Videe has been a leader in outside broadcast production for 40 years. It now provides facilities to broadcasters around the world, covering some of the leading sporting events, as well as music and culture. Interest in 4K and HDR was rapidly growing among its clients, but at the same time, they wanted extended production capabilities and always more cameras.

OBX is a triple expanding trailer, built by Tomassini Style. When expanded to its full capacity on site, OBX offers 76 square meters internally, the size of a city apartment. It is laid out in a double control room configuration, making it ideal for host broadcast productions at the biggest events.

OBX was built to provide huge internal space and technical capabilities. Central to the OBX infrastructure is Imagine Communications Platinum IP3 router, configured with 512 x 1024 video I/O, and 8000 x 8000 audio I/O. Video signals can be HD or 4K UHD, in either quad link or 2SI formats. In addition to switching, the Platinum IP3 hosts audio and video signal processing, and it also drives 14 multiviewer displays in the production area.

“We needed a new truck which was more powerful and more capable than ever, supporting up to 30 cameras in native Ultra HD,” Videe chief engineer Ilario Urbanetto said. “But we also wanted it to be the most comfortable truck to work in. When working on a major host broadcast project, our crews can be inside the truck for 14 hours or more – it is really important to us that they feel comfortable, they feel they have space, so that they deliver the best possible production.”

The architecture also includes the Selenio MCP modular solution for signal processing, including Dolby E encoding and management, and Selenio 6800+ modular processing units. To simplify system management, and to provide a fast turnaround between jobs, the infrastructure is controlled by Imagine’s Magellan SDN Orchestrator in combination with hi, human interface, an intuitive and easy-to-use control software layer for live broadcast and media infrastructures.

211 Live Terrestrial TV Channels Down Under

Chris Howe, General Manager, Commercial and Technology at NPC Media said, “Central to the design of the expanded technology platform is the ability to adapt more seamlessly to changing market demands. Imagine Communications’ Versio product strategy allows us to confidently manage our current baseband/SDI infrastructure, and more swiftly and economically transition to a full range of software-defined, commercial off-the-shelf IP-based media services. This will benefit our NPC Media clients and the wider Australian viewing public.”

To support this massive endeavor, NPC Media will implement an end-to-end broadcast playout chain from a common ingest platform through to software-based channel origination, based on Imagine Communications’ Versio product suite.

Versio was first deployed by the Nine Network to integrate NBN Television’s playout operations into the NPC in June 2018. Imagine Communications provided a full IP solution running under D-Series control and seamlessly integrated into the center’s existing baseband system, enabling Nine to manage the NBN Regional channels, as well as realize new advertising and revenue opportunities by breaking into a seventh regional market, in Northern New South Wales.