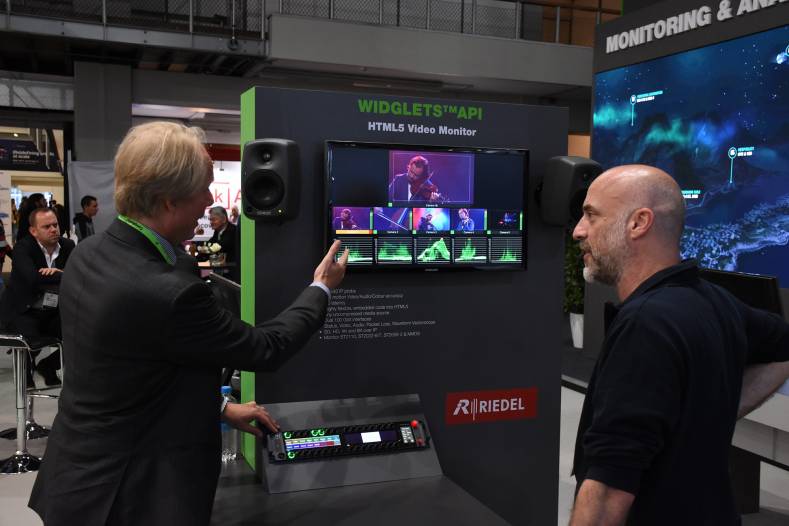 The new Widglets API could revolutionize and transform many aspects of the live television industry.

Bridge Technologies Widglets API debuted at IBC 2019 and won the Best of Show Award. Widglets adds functionality to the Bridge Technologies VB440 IP Probe. The VB440 monitors all media traffic types on an IP network. The new Widglets API for the VB440 provides a new technology for remote production functionality because it recognizes all the video, audio, ancillary data on the network collected by the VB440.

Previously only available to network managers, the data can be easily imported into any browser-based application, enabling, for example, a virtually instantaneous high-level judgement of media production quality to be possible, thanks to the VB440’s ultra-low latency.

The potential value of the new technology can, in effect, be extracted not only for monitoring and analysis of the performance of the network but also for other uses, workflows and applications that can leverage the availability of live data. For example, full motion, color-accurate, ultra-low-latency video can be made available from any source to any application or user anywhere in the world, enabling a team in multiple locations to simultaneously work on the live same project.

Simen K Frostad, Chairman, Bridge Technologies used the example of live camera shading/painting to illustrate the powerful benefits of the Widglets API. “Since the camera painter’s work is so latency-sensitive, this task is always performed at the venue – occupying a large amount of physical space in the OB vehicle. With the help of the Widglets API, the painters can be moved to a central location or to any combination of locations – because now, a single painter can have multiple cameras with multiple waveform scopes via a single HTML5 video monitor view. Crew at different locations can view all this data, instead of splitting it by location or technician. As such, using the new Widglets API for the VB440 obviously has incredibly positive implications for remote production, for example.”

“We demonstrated the Widglets API at IBC, and the response we got from the industry was hugely positive and highly encouraging,” said Frostad. “They could clearly see that it delivers something new, unique and valuable to the industry that is potentially transformational in production – and the user effort required to leverage its potential is minimal. Although the provision of a Widglets API for a network probe sounds simple, its implications are far-reaching. The Widglets API is perhaps the most exciting thing we’ve ever done, so we’re delighted to have been honored at IBC in this way.”