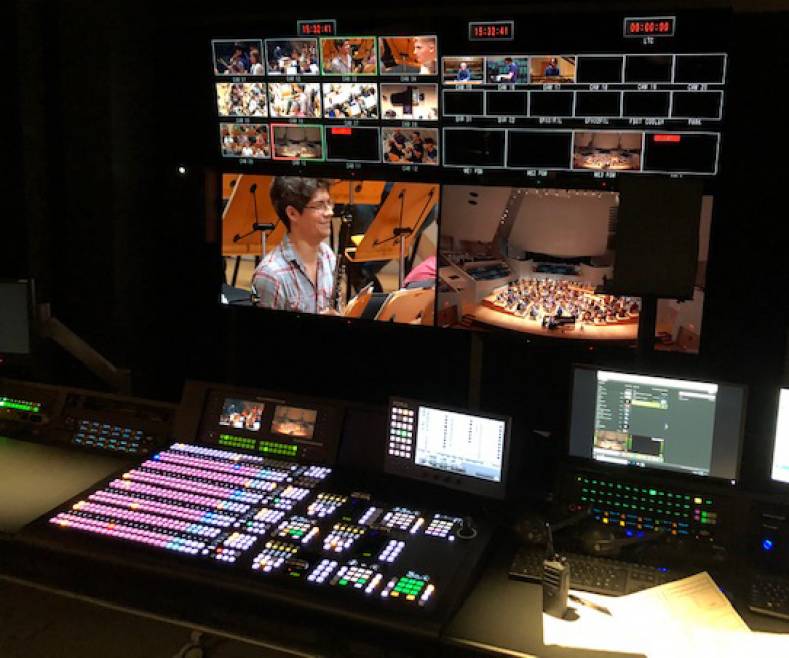 A range of 4K kit included at New World Symphony.

When NWS was looking to upgrade the already top-of-the-line audio and video infrastructure three years ago, it was set on a single-link 12G infrastructure as the backbone for the overall upgrade.

“We determined early on that our specific needs would be best served by designing our new 4K/UHD upgrade project around a single-cable 12G infrastructure,” explained Clyde Scott, Director of Video Production, NWS. “Most options were quad-link and 4K IP, but For-A was the only manufacturer to make a single-link 12G switcher large enough for our purposes. We demoed the switcher and were impressed with its capabilities and ease of use.”

Offering 12G-SDI capability on all inputs and outputs, the 3 M/E HANABI HVS-6000 uses a single cable link. Video signals are processed throughout as a single image. The HVS-6000 is a 12 RU switcher, with a maximum of 80 inputs/32 outputs or 64 inputs/48 outputs. It also offers frame synchronization, frame buffer, 3D DVE, and 4 keyers per M/E with DVE function + 4 DSKs. The switcher has an optional board-mounting SFP connector that supports an IP interface.

In addition to the HANABI main switcher panel, NWS is integrating a smaller 12-button HVS-2120ROU switcher panel into a remote control room for use with the main electronics for simultaneous use of the HANABI resources in multiple locations.