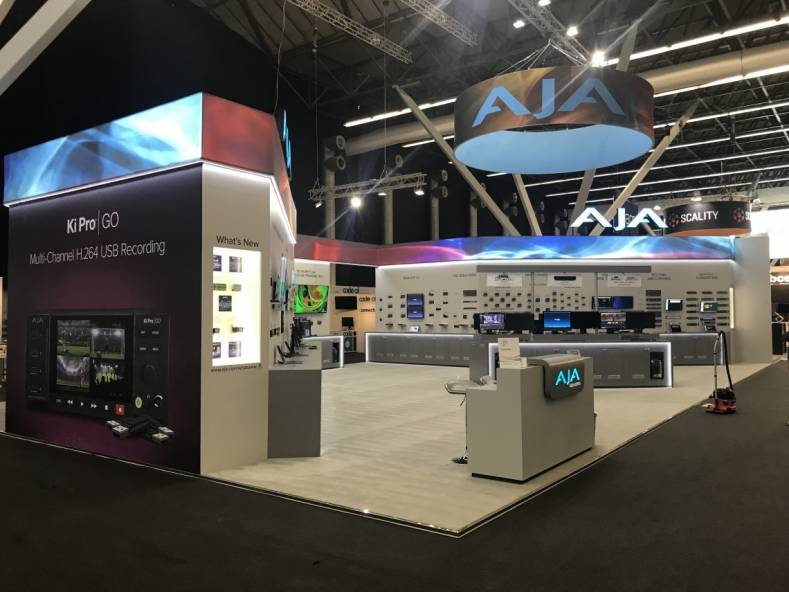 The AJA exhibit at IBC 2019 was filled with gear connecting infrastructure and workflow.

Digital content creators know they can rely of AJA Video to produce the technology that enables their other equipment to do its job better. 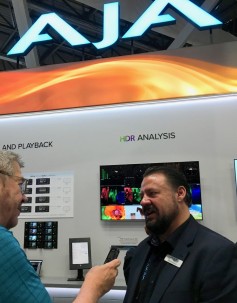 We have news to announce across three key thematic areas that are driving the industry,” began Bryce Button, director of product marketing for AJA Video Systems during our interview in their booth at IBC 2019, “and these start with the IP transition, or what I like to call ‘IP transport with benefits’ for everyone.”

“Now you will be able to utilize these edge devices for IP networking and bring in an UltraHD signal up to 50P on 10 GigE infrastructures,” he said, “and this is key for broadcasters trying to use IP with the SMPTE ST 2110 standards as they cover the upcoming large sporting events next summer.”

But Button recognizes we’ll be living in a hybrid world at least for the near future, so AJA is also addressing the growing need to simplify SDI cabling, which will be a boon to OB (mobile) trucks.

“That’s why we are introducing the KUMO 6464-12G, a 64 input, 64 output 12G SDI router,” Button told me. “This will also help you prep for 8K, which is not as far away as some may think. It will also be useful as we move into the world of virtual sets and the additional bandwidth they need.”

The rear panel of the KUMO 6464-12G showing its panoply of connectors.

Speaking of additional bandwidth, Button pointed out that among the new development cards AJA was introducing was the Corvid 44 12G, an 8-lane PCIe 3.0 video and audio I/O platform supporting 12G-SDI I/O, being shown in ten different models including passive or active cooling variants.

When it comes to equipment density, AJA was introducing three new cards compatible with the Ross Video openGear standard, namely the OG-FS-Mini, OG-ROI-DVI and OG-ROI-HDMI.

The new OG-FS-Mini combines the functionality of FS-Mini with the openGear architecture.

And he laughed that in this case “ROI” stands for “Region of Interest” rather than “Return on Investment” although, he insisted, both terms could be relevant.

Finally, Button moved on to HDR which he heralded as having moved forward a great deal in the last year.

“A huge amount of sports events from Wimbledon to World Cup have made use of it,” he said, “so as a companion to our very popular FS-HDR universal converter/frame synchronizer developed in partnership with Colorfront, we are now bringing out a second model, the HDR Image Analyzer 12G. This new introduction streamlines 4K/UltraHD HDR monitoring and analysis by supporting the latest high-bandwidth 12G-SDI connectivity.”